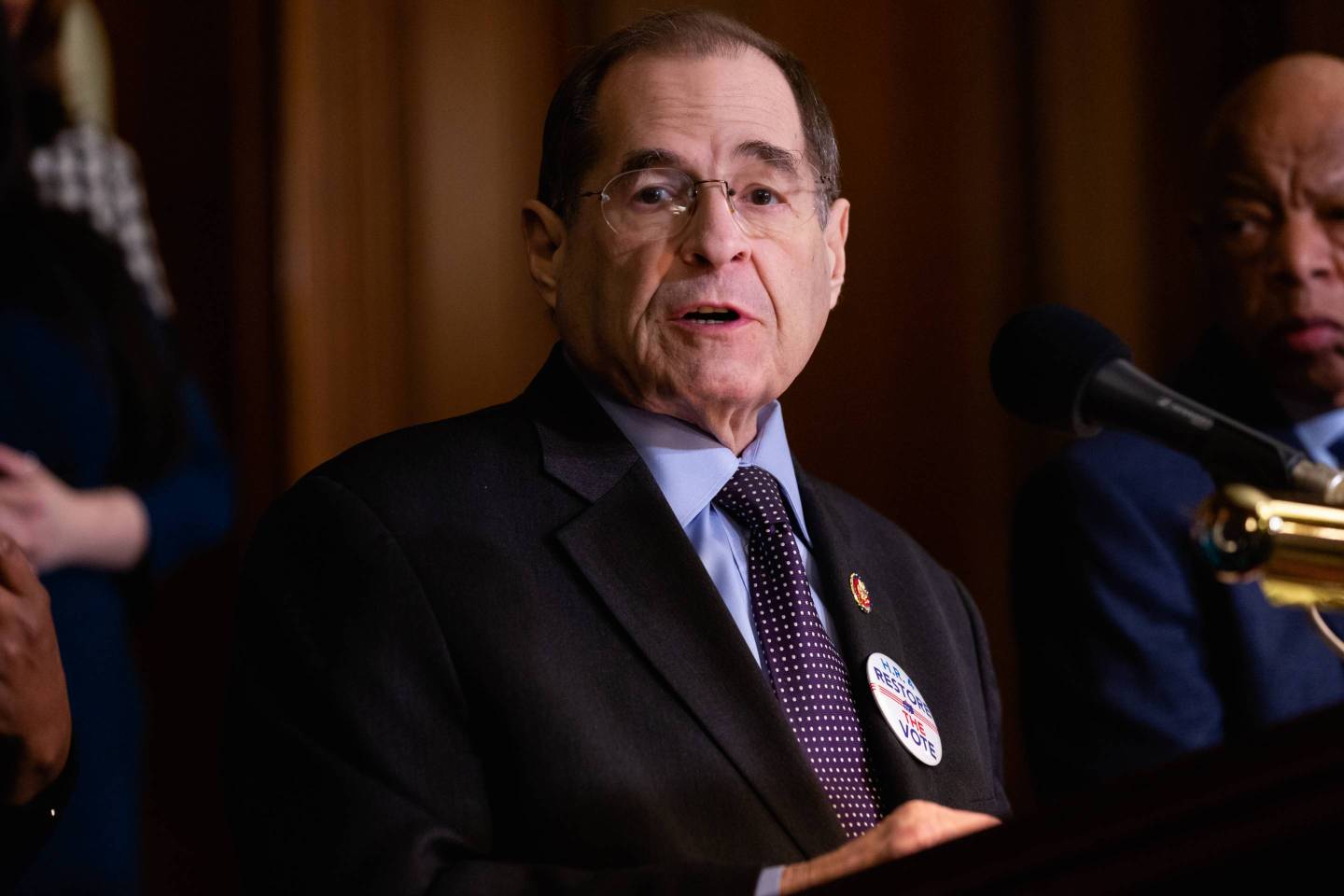 House Judiciary Chairman Jerrold Nadler escalated Democrats’ investigations of Donald Trump with sweeping demands Monday for information from scores of people on topics including the administration’s activities, the president’s business and his potential ties to Russia.

The New York City congressman’s probe includes allegations of obstruction of justice, public corruption and other abuses of power and touches on many of the controversies that have dogged Trump since the 2016 presidential campaign.

The panel asked for documents from 81 individuals, agencies and entities, including the president’s son, Donald Trump Jr., Trump Organization Chief Financial Officer Allen Weisselberg, and the publisher of the National Enquirer, David Pecker, who is accused of killing unflattering news stories about Trump during his candidacy.

“President Trump and his administration face wide-ranging allegations of misconduct that strike at the heart of our constitutional order,” Nadler wrote in letters asking for documents.

Nadler, who asked for information to be provided by March 18, follows other committee chairmen who have made sweeping document requests since Democrats took control of the chamber in January. If responses aren’t provided, the panel plans to hold votes authorizing subpoenas, a committee counsel said. This is only the first round of document requests, the counsel said.

The move is already fueling Republican charges that Nadler’s probe is a thin disguise for a predetermined outcome: impeachment. Any impeachment proceeding would be run by Nadler’s committee.

“After recklessly prejudging the president for obstruction, Chairman Nadler is pursuing evidence to back up his conclusion because, as he admits, ‘We don’t have the facts yet,’” Representative Doug Collins of Georgia, the top Republican on the Judiciary Committee, said in a statement.

The White House was among the recipients of numerous document requests, including for Trump’s communications over his dismissal of former FBI Director James Comey, possible pardons for several former Trump associates and any loans by Russians to the Trump Organization or several family members. It also asks for documents on discussions about U.S. sanctions against Russia involving Trump, his campaign, business and associates.

Other topics raised for the White House include the meeting with Russians at Trump Tower in 2016 and changes in that year’s Republican Party platform concerning Russia and Ukraine. Nadler also sought documents on any attempts to give or receive information to “foreign entities” or individuals in connection with the 2016 campaign.

The White House received the latter and “will review it and respond at the appropriate time,” White House Press Secretary Sarah Sanders said.

Trump has been lashing out over Democrats’ probes. “Presidential Harassment by ‘crazed’ Democrats at the highest level in the history of our Country,” he wrote Sunday on Twitter.

Nadler, 71, who was first elected Congress in 1992, made clear he’s prepared to proceed with his probe in ways that go beyond Special Counsel Robert Mueller’s investigation into possible Russian election collusion with Trump’s 2016 presidential team.

But Nadler said his document request isn’t part of an early impeachment inquiry.

“Before you impeach somebody, you have to persuade the American public that it ought to happen,” Nadler said Sunday on ABC’s “This Week.” There are avenues of inquiry House Democrats will press that go beyond Mueller’s probe, but “we do not now have the evidence all sorted out and everything to do — to do an impeachment.”

Mueller’s office and the U.S. attorney for the Southern District of New York, which also has been investigating matters involving the president, reviewed Nadler’s document requests and raised no objections, according to the committee counsel.

Republicans say impeachment is where Nadler is headed, and some Democrats are urging caution.

Representative Jim Jordan, an Ohio Republican, has tweeted that Nadler should “at least pretend to be serious about fact finding,” adding: “What a Kangaroo court.”

Mueller’s investigation might — or might not — produce information that could be grounds for impeachment. Nadler reiterated that House Democrats would fight to obtain the full findings of Mueller’s 21-month probe, including by congressional subpoena or lawsuit, if the Justice Department balks at turning over the report and the underlying evidence.

In a signal that House Democrats aren’t counting on having all their suspicions put to rest by the report that Mueller is completing, Nadler’s requests include one to the FBI for all documents relating to the May 2017 firing of Comey and communications from Trump or his representatives concerning former Attorney General Jeff Sessions’s recusal “from any investigation related to the 2016 Presidential campaign.”

The request to Weisselberg, the Trump Organization executive, included demands for “any present or emolument of any kind whatever” to Trump, family members or his businesses after he won the 2016 presidential election. It also asks about plans for a Trump Tower in Moscow or any other possible real estate deal in Russia by Trump or the Trump Organization.

The Judiciary Committee chairman said there are much broader questions and concerns about whether Trump, through some of his actions, is undermining “the rule of law” — a reference to established and defined limits on the arbitrary exercise of power.

Nadler’s document requests ensure that the probe of Trump, his family and his inner circle will continue for months if not years, even if Mueller’s findings — which Trump has branded a “witch hunt” — don’t find evidence of collusion with Russia by those around Trump or obstruction of justice by the president.

Nadler plans to hold public hearings on the information and material obtained, though witnesses haven’t yet been determined.

Nadler’s investigative plans were in place last week, even before Trump’s former lawyer and fixer, Michael Cohen, testified publicly before the Committee on Oversight and Reform, and in private before the House and Senate intelligence committees.

Cohen told lawmakers Wednesday that Trump directed Cohen to make illegal hush-money payments to two women as a way to quash potential sex scandals during the 2016 campaign, that Trump Jr. had a role in the payments, and that Trump had deflated the value of some of his properties to lower his tax payments.

Cohen’s appearances have since led several other committees to announce their own next steps at looking into Trump’s businesses and charity, including seeking his tax returns, collecting more documents, holding hearings and calling witnesses for testimony.

Oversight Committee Chairman Elijah Cummings of Maryland suggested that his panel will pursue interviews with Trump associates that Cohen mentioned in his testimony or were found in records he provided to his committee, possibly including Trump’s children.

And Intelligence Committee Chairman Adam Schiff of California has said his panel will hold a March 14 hearing with former with Trump associate Felix Sater, who helped him develop a hotel. Weisselberg also will appear before Schiff’s committee for an interview, according to people familiar with the matter.

Schiff said on CBS’s “Face the Nation” on Sunday that his panel also plans to talk some “some of the banks that have been doing business with Mr. Trump” such as “Deutsche Bank, which has had a history of laundering Russian money.”

He said he also wants to talk with officials in the Trump Organization and others who have information about Trump’s plans for a building in Moscow and about potential money laundering. Representative Maxine Waters of California, chairwoman of the House Financial Services Committee, has said she is getting cooperation from Deutsche Bank in her panel’s Trump-related probes.

There is an impatient clamor by some Democrats for impeachment and hesitancy by others who want to wait for the Mueller report to even discuss it.

‘Dragging the GOP Down’

“Donald Trump is dragging the GOP down to defeat,” Raskin said in a recent interview. “To impeach Donald Trump now is to offer a big helping hand to the Republicans, partly.”

But Raskin said Congress shouldn’t abandon its constitutional oversight responsibilities — a message Nadler is set to amplify as he seeks documents and pursues witnesses on matters beyond areas being covered by federal inquiries.