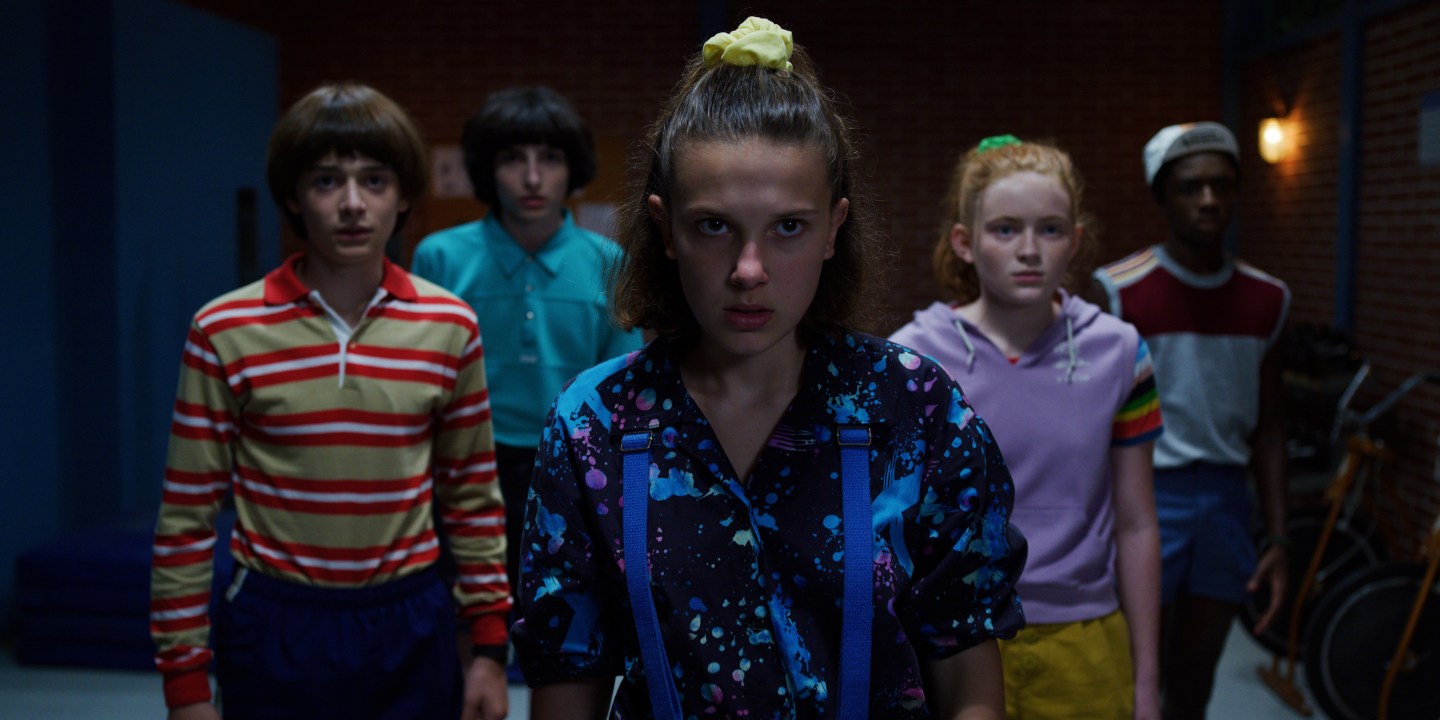 Some news to turn your week Upside Down.

Netflix has officially greenlit a fourth season of Stranger Things, announcing the renewal alongside an ominous teaser video.

As the show’s traditional synth score is disrupted by a series of photo-negative flashes, the title card fades from fluorescent red to an overgrown dark grey, and viewers glimpse an eerie clearing populated by a broken clock and a Hawkins road sign. The scene abruptly cuts to one sentence, punctuated by bell tolls: “We’re not in Hawkins anymore.”

No release date has been set for the fourth season of Stranger Things, which premiered its third installment to widespread acclaim this past July. But the end of that season—SPOILERS AHEAD—set up the series to move beyond its typical setting of Hawkins, Ind.

As season three ended, Hawkins Chief of Police Jim Hopper (David Harbour) went missing, presumed dead, after seemingly staying behind to blow up a Russian-built gate to the alternate dimension known as the Upside Down. The Byers family has moved away from Hawkins, headed to a new unnamed town and bringing Hopper’s adopted daughter Eleven (Millie Bobby Brown) with them. The series ended with a post-credits sequence in Russia, where it’s revealed that traces of the Upside Down have reached that country as well—and an unnamed “American” is being kept captive.

With that conclusion, a Stranger Things 4 that moves the series outside of Hawkins feels like a logical step forward, as well as one that could open the door for spinoffs set within the same universe. Netflix, while teasing the new season of Stranger Things, also announced that it’s signed co-creators The Duffer Brothers to a new, multi-year deal that will span film and TV efforts.

“The Duffer Brothers have captivated viewers around the world with Stranger Things and we’re thrilled to expand our relationship with them to bring their vivid imaginations to other film and series projects our members will love,” said Ted Sarandos, Netflix’s chief content officer, in a statement. “We can’t wait to see what The Duffer Brothers have in store when they step outside the world of The Upside Down.”

Added The Duffer Brothers: “We are absolutely thrilled to continue our relationship with Netflix. Ted Sarandos, Cindy Holland, Brian Wright, and Matt Thunell took a huge chance on us and our show — and forever changed our lives. From our first pitch meeting to the release of Stranger Things 3, the entire team at Netflix has been nothing short of sensational, providing us with the kind of support, guidance, and creative freedom we always dreamed about. We can’t wait to tell many more stories together — beginning, of course, with a return trip to Hawkins!”

As Netflix faces increasingly stiff competition from wealthy competitors like WarnerMedia (with its HBO Max service), Apple (with Apple TV+), NBCUniversal (with Peacock), and Disney (with Disney+), the streamer will have to reckon wtih deep cuts to its content library. Some of the company’s most-streamed series include comedies like Friends, The Office, and Parks & Recreation, and dramas like Grey’s Anatomy, Criminal Minds, and NCIS—all of which Netflix stands to lose as those series’s original homes move to repossess them and stock their rival streamers.

Given that, Netflix’s big spending on original series seems likely to continue, and it’s likely that the company will work to keep its existent hits alive for as long as possible. And Stranger Things, with its strong ’80s-retro aesthetic and fan following, is as close to a flagship series as Netflix has these days.

Its original rep House of Cards met with an ignominious end after sexual assault allegations emerged against star Kevin Spacey; after the actor’s firing, one last season was made, foregrounding co-lead Robin Wright, but it premiered to relatively little fanfare and didn’t break through to the Emmys. And early hit Orange is the New Black, after losing steam in its later years, finished up its seventh and final season in July. Though it will be eligible for Emmys next year, that this year’s ceremony didn’t even include it in its highlight reel of recently departed series (e.g. Game of Thrones, Veep, and House of Cards) doesn’t bode well for its chances.

Since those two series commanded the pop-culture conversation in their first years, Netflix has struggled to grow other similarly sized hits. Though animated stalwart Bojack Horseman and newcomer Tuca & Bertie both earned widespread acclaim (the former across five already-aired seasons and an upcoming two-part final season), Netflix has chosen to cancel both within the past year. (Notably, both cancellations came after the Bojack crew emerged triumphant in their battle to unionize the production, making the series a pricier proposition for Netflix. Animators for ShadowMachine, which produced both series for Michale Eisner’s Tornante Company, had spent months negotiating for union wages. Netflix’s decision to pull the plug accompanies its push to reduce costly outsourcing to animation companies by launching an in-house studio.)

But with Disney+, Apple TV+, and others launching the coming months, Netflix is up against a wall as it looks to secure the relatively few hit series it has going. Only The Crown and Ozark remain as major Emmy contenders, though Mindhunter and the soon-to-end GLOW and 13 Reasons Why have both helped the streamer to move the pop-culture needle, however slightly.

Meanwhile, renewed freshman series hold promise, though none have broken through to Stranger Things-level success. Those include Narcos: Mexico, The Haunting (née of Hill House), Sex Education, The Kominsky Method, Russian Doll, I Think You Should Leave with Tim Robinson, Chilling Adventures of Sabrina, Altered Carbon, Lost in Space, and the just-premiered The Politician. Signing The Duffer Brothers to a new overall deal suggests the streamer is (understandably) eager to expand their creative vision in a move that could yield more series as monumentally successful as their first and carry Netflix through a future in which the success and failure of its originals will hold increasing weight.

—Musicians and fans unite to keep facial recognition tech out of concerts
—Recap: Succession season two, episode eight
—Netflix was “creatively attuned to us,” says Martin Scorsese at Irishman premiere
—Spider-Man officially returns to the MCU
—Building Judy Garland: How Renée Zellweger was transformed into the legend
Follow Fortune on Flipboard to stay up-to-date on the latest news and analysis.