Did the Trump White House Try to Cover Up the Whistleblower’s Complaint? 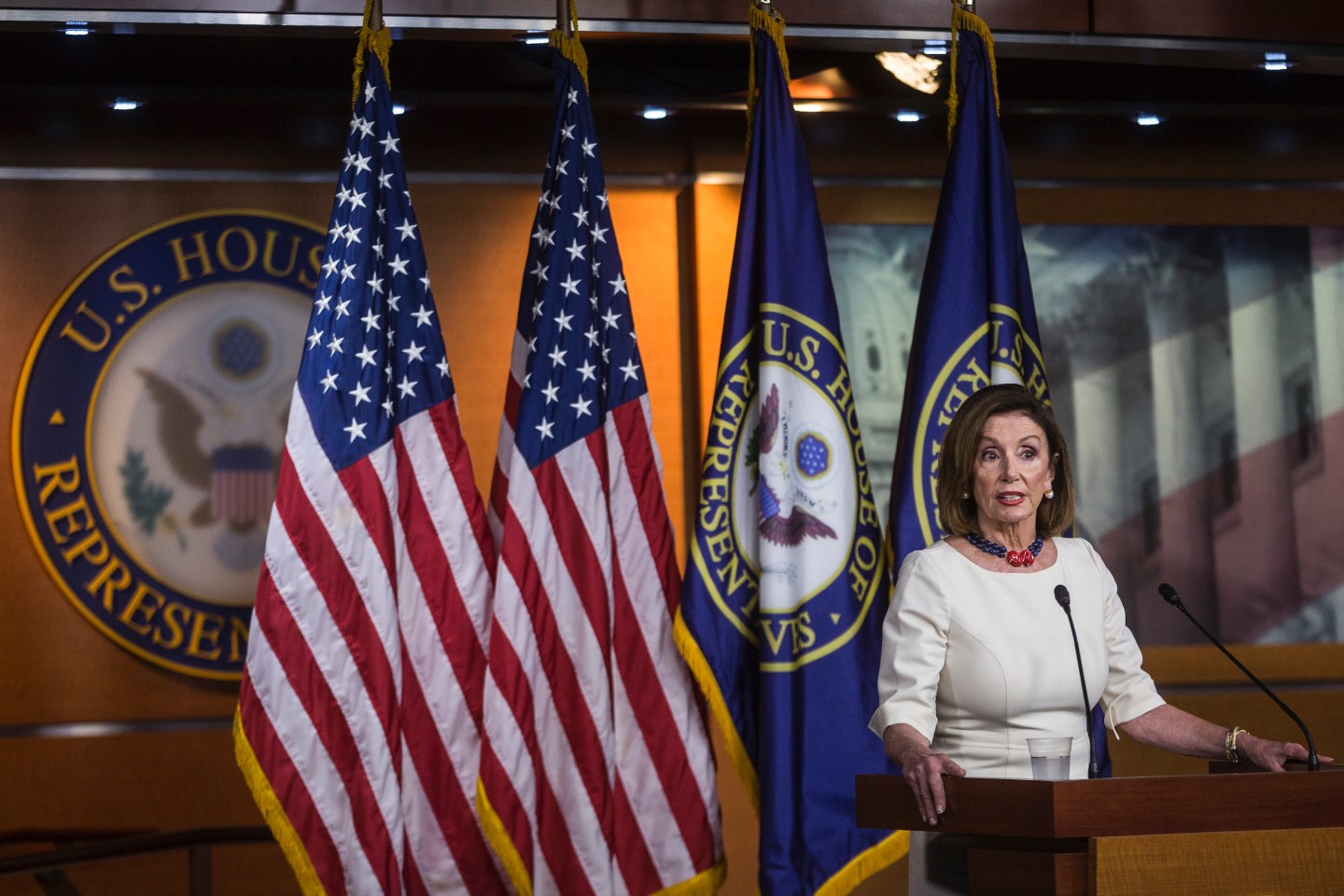 After a White House whistleblower’s complaint triggered a congressional impeachment inquiry of President Trump, there’s been a flurry of accusations and counterattacks. Here’s what unfolded during the investigation’s first day:

She added: “This is a coverup.”

Pelosi spoke just after the release of the whistleblower’s revelations at the center of Congress’ impeachment inquiry. The complaint alleges Trump abused the power of his office to “solicit interference from a foreign country” in next year’s U.S. presidential election. The complaint says the White House then tried to “lock down” the information to cover it up.

Trump has denied any wrongdoing.

While a House intelligence committee hearing on the whistleblower’s account got underway, the president attended a closed political fundraising breakfast in New York. The president has been in the city attending meetings at the U.N. General Assembly.

The fundraiser at a Manhattan restaurant was expected to raise about $3 million for Trump and other Republican campaigns.

Visible through a nearby sandwich shop, a woman held a sign that said, “Whistleblowers set us free.” Next door, a pizza place posted a homemade sign written on a pizza box that said “We love Mr. Trump.”

Trump began his day with tweets denouncing House Democrats’ impeachment inquiry and urging Republicans to “fight hard,” saying “our country is at stake.”

In other tweets, Trump continued to assail House intelligence committee Chairman Adam Schiff, saying he “has zero credibility” and is pushing “Another fantasy to hurt the Republican Party!”

Schiff, a Democrat, quickly responded: “I’m always flattered when I’m attacked by someone of the president’s character.”

Upon the president’s return Thursday to Washington, in comments to reporters, Trump said of the impeachment inquiry: “There should be a way of stopping it, maybe legally through the courts.”

Trump called the intelligence committee hearings “a terrible thing for our country.” And he claims House Speaker Pelosi “has been hijacked by the radical left” in her pursuit of his impeachment.

Testifying on Capitol Hill, Acting Director of National Intelligence Joseph Maguire said the whistleblower “did the right thing” by coming forward to report concerns over the White House’s handling of a call between Trump and Ukraine’s leader.

Maguire told Schiff’s committee the whistleblower, who has not been identified, followed the law “every step of the way.” Maguire said the situation is unique and unprecedented.

A declassified version of the complaint was released to the public before the hearing, detailing a July call between Trump and Ukranian President Volodymyr Zelenskiy during which Trump pressured him to investigate political rival Joe Biden.

Maguire also faced questions whether the White House sought to suppress the transcript. House Democrats have criticized him for withholding the complaint for weeks. The complaint was released Wednesday to Congress.

In the days following the phone call between Trump and Ukraine’s new president, senior White House officials intervened to “lock down” all records of the call. That’s according to the declassified whistleblower complaint released by the House intelligence committee.

The complaint says the whistleblower learned about the effort from “multiple U.S. officials.”

However, Maguire said he upheld his “responsibility to follow the law every step of the way” as he reviewed the complaint detailing Trump’s interactions with the president of Ukraine.

Furthermore, Maguire said he could not legally release the complaint because of executive privilege, which he added is a privilege he “did not have the authority to waive.” Maguire said he believes the matter is “unprecedented.”

By coming forward, Schiff said the whistleblower showed “more of a dedication of country, more of an understanding of the president’s oath of office, than the president himself.”

The White House claims the whistleblower’s complaint “shows nothing improper.” According to press secretary Stephanie Grisham: The complaint “is nothing more than a collection of third-hand accounts of events and cobbled-together press clippings.”

Grisham added that Trump released a rough transcript of his call with the Ukranian president on Wednesday “because he has nothing to hide.”

While House Democrats who have read the document said it’s “deeply disturbing,” Grisham says, “The White House will continue to push back on the hysteria and false narratives being peddled by Democrats and many in the main stream media.”

The redacted complaint suggests Ukrainian leadership was “led to believe” that a phone call between Trump and Zelenskiy was conditioned on whether the Ukrainian leader “showed willingness to ‘play ball'” on issues raised by Giuliani.

Giuliani had publicly stated his intention to secure from Ukraine derogatory information about former vice president Biden and his son Hunter.

Meanwhile, Secretary of State Mike Pompeo said the State Department has not engaged in any improper activity regarding Ukraine and is focused squarely on trying to help Kyiv combat corruption.

Pompeo told reporters on Thursday in New York that to the best of his knowledge all actions taken by State Department officials were “entirely appropriate.” He did not address claims from Giuliani, that the State Department instructed him to reach out to Ukrainian officials.

—A running list of questions on the impeachment inquiry, answered
—3 allegations made in the declassified whistleblower complaint
—What is CrowdStrike? Trump mentioned the company in his Ukraine call
—These are the key players in the Trump impeachment inquiry
—How impeachment momentum massively shifted among democrats
—The 25 most powerful women in politics
Follow Fortune on Flipboard to stay up-to-date on the latest news and analysis.