Trump Turns His United Nations Visit Into a Campaign Stop 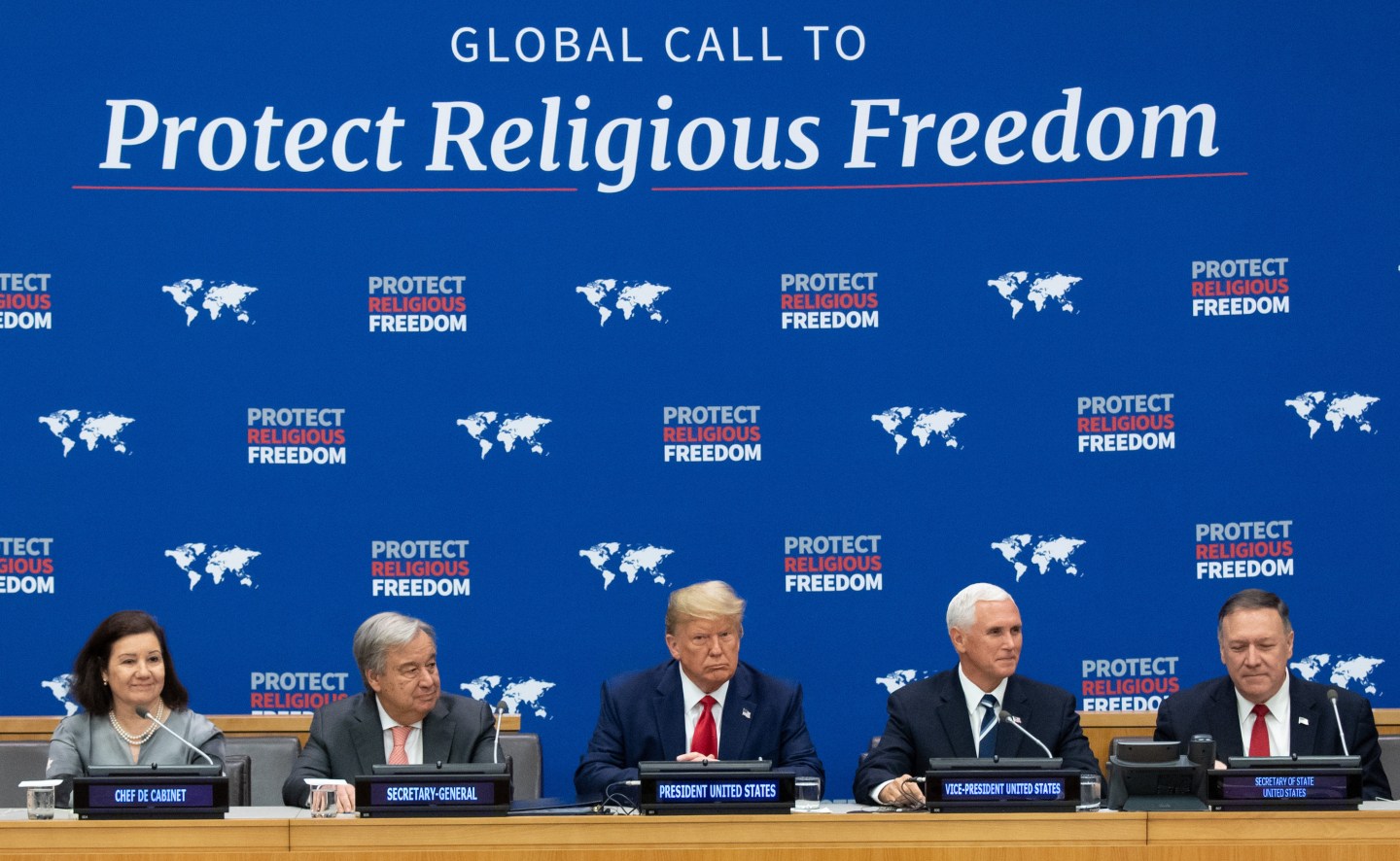 While President Donald Trump addressed a Monday conference for world leaders at the United Nations, he was talking to his political base as he breezed by a major climate change summit and focused instead on religious persecution, an issue resonating with evangelical supporters who want to see him reelected next year.

The climate summit was a centerpiece of this year’s U.N. schedule. It was not on Trump’s schedule but he stopped by for about 15 minutes to observe. As he left, he said: “I’m a big believer in clean air and clean water and all countries should get together and do that, and they should do it for themselves. Very, very important.”

His main event, though, was a meeting on religious persecution. Trump said it was an “urgent moral duty” for world leaders to stop crimes against faith, release prisoners of conscience and repeal laws restricting religious liberty.

“Approximately 80% of the world’s population live in countries where religious liberty is threatened, restricted or even banned,” Trump said, adding that when he first heard the statistic, he didn’t believe it and asked for it to be double-checked.

Trump’s speech on Monday extends a long-running focus on international religious freedom that speaks to a key priority of his evangelical base. His administration has hosted annual meetings on the topic in Washington, and Secretary of State Mike Pompeo announced during this year’s event that he would create an international alliance dedicated to the issue.

Underscoring the importance of Trump’s action on the issue to evangelical voters who are critical to his 2020 reelection bid, one prominent evangelical backer Dallas-based pastor Robert Jeffress lauded Trump for focusing on religious freedom instead of climate change.

“What president in history would have the guts to do what President Trump is doing?” Jeffress, who was set to be in the audience for Trump’s speech, said on Fox News. “And it’s this kind of leadership that is absolutely infuriating the president’s enemies, but it’s also energizing his base, especially his religious base of voters.”

The Republican president arrived in New York against a backdrop of swirling international tensions, including questions about his relationship with Ukraine, the uncertain future of Brexit, the U.S. trade war with China, stalled nuclear negotiations with North Korea and a weakening global economy.

The most immediate challenge may be Iran.

Trump will try to convince skeptical global capitals to help build a coalition to confront Tehran after the United States blamed it for last week’s strike at an oil field in Saudi Arabia. Asked as he arrived at the U.N. building if he will meet soon with Iran President Hassan Rouhani, Trump replied: “We’ll see what happens. We have a long way to go, we’ll see what happens.”

Trump’s fulfillment of a campaign promise to exit the Iran nuclear deal has had wide ripple effects, leading Tehran to bolster its nuclear capabilities and dismaying European capitals who worked to establish the original agreement.

Tensions between Washington and Tehran spiked after a Saudi Arabia oil field was partially destroyed in an attack that Mike Pompeo blamed on Iran and deemed “an act of war.”

Now Trump will try to enlist wary world leaders in a collective effort to contain Iran.

Ukraine also looms large on Trump’s schedule. Even one week ago, a one-on-one meeting with Ukrainian President Volodymyr Zelenskiy would have been seen largely as an afterthought.

But Trump’s meeting on Wednesday with Zelenskiy will come just days after revelations that the president urged his Ukrainian counterpart in a July phone call to investigate the activities of the son of former Vice President Joe Biden. Trump said he was concerned about corruption; Democrats frame his actions as an effort to pressure Zelenskiy to dig up damaging material on a potential 2020 rival. Trump said Biden was “wrong” to say that he’d never talked to his son about the issue.

“What Biden did was wrong,” Trump said Monday, again defending his discussion of the issue with Zelenskiy. “We’re supporting a country, so we want to make sure that country is honest. One of the reasons the new president got elected is he was going to stop corruption. So it’s very important that on occasion that you speak to somebody about corruption.”

That pressure is the subject of a whistleblower’s complaint that the administration has refused to turn over to members of Congress, setting up a showdown with Democrats.

Among the nations whose leaders Trump plans to meet in New York: Iraq, Poland, Egypt, Pakistan, South Korea, and Japan. He will also meet with British Prime Minister Boris Johnson, clinging to power after failed attempts to steer his nation out of the European Union.

—Higher international postal rates loom before Christmas
—The story behind Biden’s son, Ukraine, and Trump’s claims
—These are the 2020 senate races to watch
—Jeff Bezos details Amazon’s net-zero carbon emissions 2040 goal
—Can Andrew Yang win in 2020? Inside his unorthodox campaign
Get up to speed on your morning commute with Fortune’s CEO Daily newsletter.