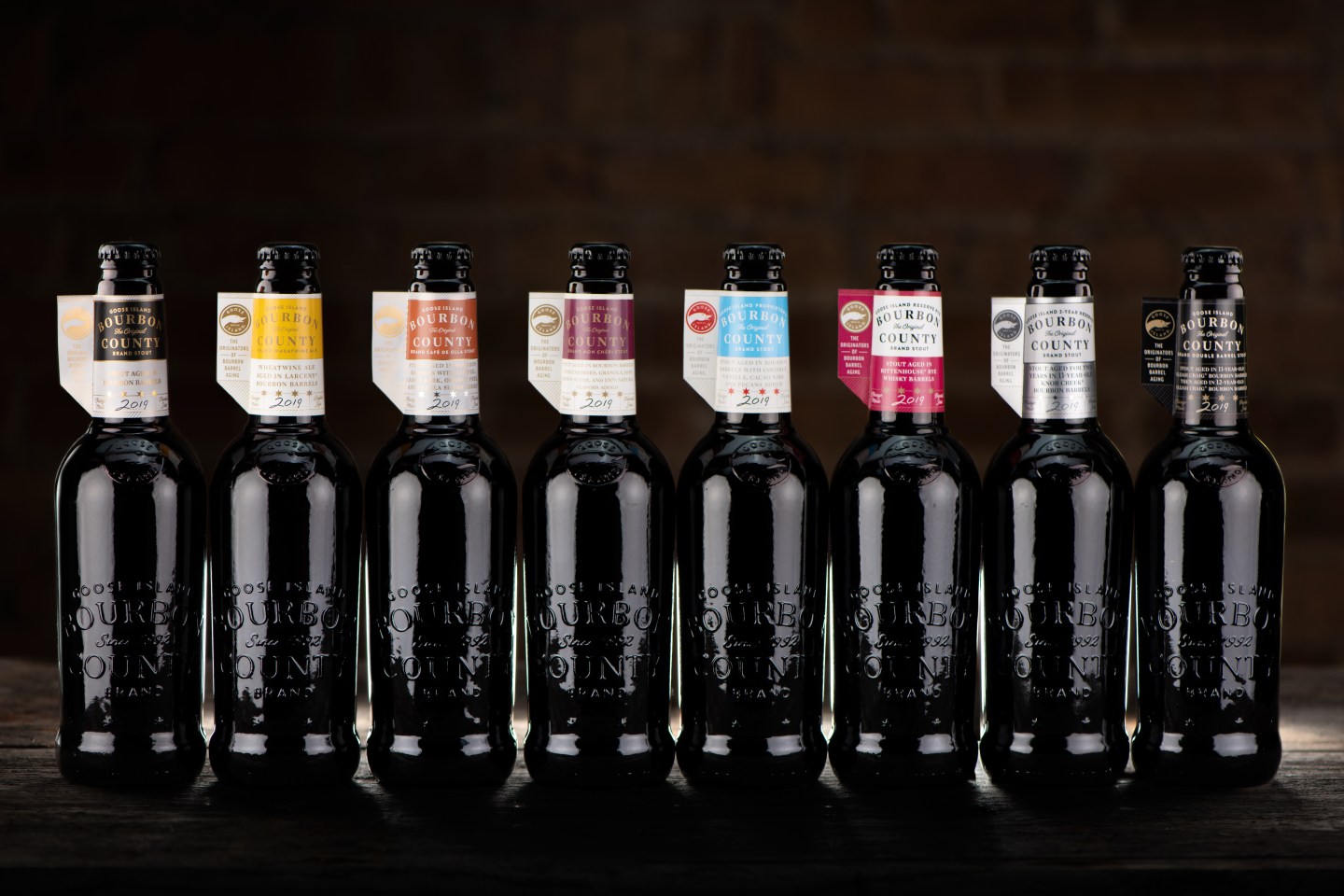 Beer lovers, still groggy from Thanksgiving dinner and wine, have nine good reasons to wake up early on Black Friday this year. The busiest shopping day of the year is once again release day release day for Goose Island’s Bourbon County Brand Stout—an “event” moment in the beer world that’s so anticipated it erases the often-antagonistic lines between the craft and macro brewing worlds. And the brewer is offering a slew of choices this year.

All totaled, Goose Island (an Anheuser-Busch InBev holding) will offer eight variants of the beer to choose from this year, as well as a collection of beers from previous years, letting people taste firsthand how the stouts mature after being cellared.

Bourbon County Brand Stout has been around since 1992, after Goose Island brewmaster Greg Hall found himself seated next to Jim Beam’s Booker Noe at a dinner. Hall mentioned an idea he had about aging beer in a bourbon barrel and the two quickly reached an agreement.

The collection has grown tremendously since that first batch. Here’s what you’ll find when they go on sale Nov. 29.

The original—aged in a mix of Heaven Hill, Buffalo Trace and Wild Turkey bourbon barrels. The variety of barrel origins should result in a more complex beer this year, but one that’s still loaded with tastes of chocolate, vanilla and toffee.

Expect this to be one of the more in-demand variants this year. The stout was ages in two different barrels—Elijah Craig 11 year and Elijah Craig 12 year—for twice as long, which should result in a layered, deeper bourbon taste. It might be a bit boozy this year, but this one should age wonderfully.

Like the Double Barrel, this variant spent two years in bourbon barrels to evoke an oakier quality. Instead of spending one year in separate containers, though, it rested for two years in 11-year-old Knob Creek barrels. The result, say brewers, is an oak-forward stout that has a nutty quality to it.

An offshoot of a returning variant, this version of the stout is aged in rye whisky barrels, specifically Rittenhouse Rye, to highlight that spicy flavor. There’s also a fruity hint to the beer.

A Chicago exclusive release, this year’s Proprietor’s stout goes heavy on chocolate, pecans and coconut and reportedly ends with notes of marshmallow.

Wheatwine ale (think barleywine, but with a focus on wheat) made its debut last year and was such a hit with consumers that Goose Island decided to bring it back again. This year’s batch was aged in Larceny wheated bourbon casks, which brewers say gives it a softer profile. Brewers say it carries the tastes of caramel, vanilla, butterscotch and toffee.

Goose Island skipped offering a coffee stout last year, opting instead for a coffee barleywine. This year, it goes back to a more traditional incarnation, adding Intelligentsia coffee beans and cold brew to the stout. Orange peel and panela sugar are also added to make the beer more complex.

A new offering for 2019, this ticks the ‘let’s try something different’ box for 2019. Mon Chéri is made with Balaton and Montmorency cherries, then brewed with oats, granola and a bit of brown sugar. The goal is to create a beer that brings cherry cobbler to mind (with the oats, granola and sugar creating a crust-like taste) that concludes with a smooth chocolatey finish.

Bourbon County beers are often best after a couple of years. The aging process often adds a thickness to the beer, lets the booziness burn off and results in a much more complex drink. Problem is: You have to resist drinking the beers for a year or two, which isn’t easy. The Vertical Collection offers Bourbon County Stouts from 2017, 2018 and 2019 in one package, letting people compare them side by side and see how much the beer evolves in just a year or two.

—Australia’s new wave of winemakers won’t make Shiraz
—How the bar industry plans to deal with harassment and unruly guests in the workplace
—How to drink–and enjoy–red wine in the summer
—What I learned in inclusion training at the world’s top cocktail festival
—Tap these bottles of wine with your phone to learn more about their makeup
Follow Fortune on Flipboard to stay up-to-date on the latest news and analysis.