Rebooting Converse: Should the Brand Play Hard to Get? 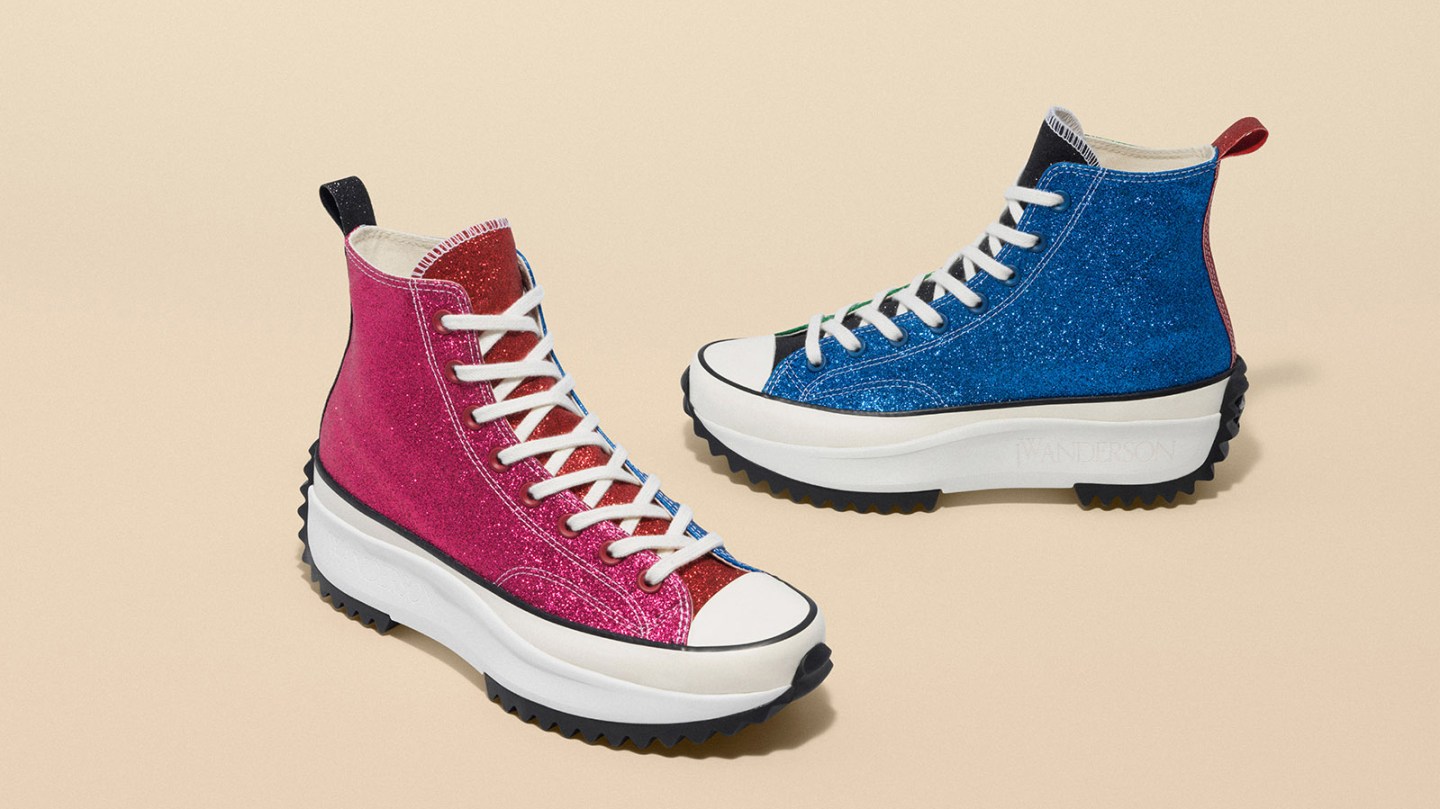 Converse is throwing a lot of spaghetti at the wall, trying collaboration after collaboration, while U.S. sales for its iconic Chuck Taylor high-and-low-top canvas sneakers continue to slump. This summer, at rough count, the brand will unveil a half-dozen collaborations and launches: Shoes made of upcycled jeans, shoes that change color like mood rings, shoes with dolphins. Even shoes that disavow being Chucks altogether.

It’s puzzling, since Converse should be on fire right now: Retro sneakers are hot, clothing has never been more casual, and a recent Piper Jaffray survey shows teen girls spending more on footwear. Yet youthful, fashion-forward consumers, the future of any contemporary clothing or shoe brand, aren’t feeling it for Converse as fervently as they were a few years ago.

The $2 billion subsidiary of Nike Inc. is losing marketshare to thick-soled Vans, a long-standing Chucks rival and favorite among streetwear enthusiasts, including skateboarders.

Vans last year posted sales of $3 billion, a 45% increase, according to its parent company, VF Corp., behind other activewear and sportswear brands as Timberland, The North Face, Wrangler, and Jansport. Recently, Vans was named the second most popular athletic brand—behind Nike’s athletic kicks—in a Piper Jaffray survey of 8,000 teens.

D’Lila Star Combs, Chance Combs, and Jessie James Combs in their Converse, at the recent “The Secret Life of Pets 2” premiere in Westwood, Calif.
Axelle/Bauer-Griffin/FilmMagic/Getty Images

In contrast, Converse’s revenues have continued to deflate and there has been executive turnover. Matt Powell, sports industry advisor for NPD Group, said Converse’s sales are down by a “mid teens” percentage year-over-year through June, according to data his firm collects. NPD’s data excludes Converse’s own stores and its e-commerce business.

Nike, a $39 billion brand, bought Converse in 2003 for $200 million. At the time, the brand had an audience of aging loyalists and reference-savvy youngsters who knew Chuck Taylors had been a uniform for artists (Jackson Pollock), actors (James Dean, Marlon Brando) and musicians (Kurt Cobain, Bob Dylan, the Ramones.) In old photos, those dirtied, spattered, and knotted-up Chucks reflected the patina of famous, creative lives of iconoclasts.

Every generation has a Converse standard-bearer. In recent years, it has been actor Kristen Stewart, slipping into Converse while promoting Chanel. Model Kaia Gerber is photographed constantly in Chucks; ditto Blue Ivy, Beyonce and Jay Z’s seven year-old daughter. Presidential hopeful Kamala Harris says she has a closet full of Chucks. Instagram has more than 1.4 million posts tagged #chucks and more than a million more with variation hashtags.

Chucks are “part of the cultural fabric of America. You can wear a pair of Converse sneakers anywhere, because they are cool. They don’t try too hard. They’re not precious,” said Linda Knight, chief creative officer of Phenomenon, an advertising and branding agency.

In fact, while Converse continually trots out dolled-up, collectible versions of Chucks, what celebrities and style influencers often wear is the brand’s basic style, in black or white. The shoes are often considered the epitome of cool when they are ratty from wear, not collectible perfect.

The reinvented-Chuck design collaborations run the gamut from streetwear to high-end fashion to sports. They are often in limited runs and grab attention. A design by New York graphic artist Filip Pagowski and Comme des Garçons’ Rei Kawakubo, with peering eyes against a red-heart emerging from the sole of white or black high tops, sold out soon after its June 20 launch. So did the marine-mammal inspired Chucks designs by Stranger Things actress Millie Bobbie Brown, released in July. The next collaboration to drop is one with rapper and music impresario Tyler, the Creator, who developed the Golf le Fleur Colorblock collection in white leather with red or green sides of the sole, with matching shoelaces.

Even with softer sales, the Chuck Taylor is money. Since its launch in 1917 as a basketball shoe, the sneaker has sold more than a billion pairs worldwide, and still has “tremendous resonance,” numbering among the top 10 shoe styles sold in the U.S. every year, Powell said. The Chuck Taylor All-Star brand has been a star for parent company Nike: Revenues have grown tenfold in 15 years.

Converse is working feverishly to re-ignite. In addition to continually remixing the recipe for Chucks, it’s trying to jump-start other businesses within the brand. In a Nike conference call in late June, Andy Campion, Converse’s executive vice president and CFO, cited a “new, energized leadership team at Converse, focused on fueling growth through product diversification, including reigniting Converse’s authentic brand positioning in basketball.” In April, they debuted the All Star Pro BB, a good-looking Converse basketball shoe juiced by Nike performance technology.

The Future Canvas for Chucks’ Modern Collection.
Courtesy of Nike

Going forward, a Converse spokesperson said the Renew initiative will undergird all product designs. ” Renew is a strategy,” she said. “Through Renew, we are exploring new methods…that both lessen our environmental impact and make smart use of existing materials, like recycled textiles, plastics, and our own leftover canvas.

Starting with the Chuck, the spokesperson said, “we can achieve global scale quickly. That means that, within the next year, there will be hundreds of thousands pairs of Chucks made from up-cycled and recycled materials diverting countless tons from landfill.”

Since 2015, they’ve also tackled fit. Traditional Chucks are notoriously thin and unsupportive, not great for aging feet or expectations of yoga-pant comfiness. They’ve twice re-engineered Chucks for a sleeker look and a cushier, more modern fit. The Chuck II didn’t meet sales expectations. It’s unclear how the Chuck Modern, a new swing at the same ball, is faring. “I don’t know if the customer recognizes the differences,” Powell noted.

And this may be part of the problem with so many collaborations and Chucks in existence. When you Google “Converse” you can find countless designs—from giraffe, dinosaur, and Hello Kitty prints to Coca-Cola, Andy Warhol and Batman motifs. With such a Chucks echo chamber, it may be hard for the consumer to differentiate, or feel compelled to add another pair to the closet.

However, the brand seems to get this, reflected in the ironic design of the recent Chuck70 for Footlocker. Graffitied on the shoe: “This is Not a Chuck.”

Play hard to get?

Sam Poser, equity research analyst at Susquehanna International, said Converse needs to fix its overall brand appeal. He suggested the company use a “pull model” as Nike does. In a pull model, brands deliberately keep supply hovering just below demand, particularly on coveted styles. When a customer can’t snap up a product, it whets their appetite for the next round of merch. “Nike has done a great job with this. Lulu has done a great job. Adidas has done a great job,” Posner said. “Their brands are sacrosanct.”

While the company’s design collaborations are creating consumer buzz, and often sell out, in general, Converse hasn’t created much buying urgency. Without fixing this issue, Posner asserted, its hard for other initiatives to catch hold.

Knight suggested the brand should own their “authentic, anti-establishment, punk side…Let everyone else duke it out in the sports and luxury category. Own the anti-statement.”

On Instagram, they’re doing some of this. #InMyConverse features profiles of social activists, such as Legally Black, a UK collective which replaces white actors in famous movie posters with black people to raise media awareness.

Asked to weigh which of Converse’s launches could help U.S. sales rebound, Powell said Converse Renew has some potential: “The customer is absolutely concerned about sustainability and they’ve said they’d be willing to pay more for products made sustainably.” But, he added, Converse has to tell that story well, so the customer understands the product’s attributes and $5 to $10 price premium. Some of the sustainable shoes read: “Life’s too short to waste.”

Powell was skeptical about Converse’s recast basketball business, given overall lackluster demand for basketball shoes, and the fact that other major brands have targeted the category with lots of new product. “They’re all hoping basketball comes back as a fashion look and want to be ready to leverage that,” Powell said. “Long term, I’m not optimistic.”

Tiffany K. Schreane, marketing expert and Fashion Institute of Technology lecturer, said for its basketball shoe, Converse needs to market the brand with a face of a player. (Converse has developed shoes with basketball player Kelly Oubre, Jr., of the Phoenix Suns, and China’s Abudushalamu Abudurexiti, playing for Xinjiang Flying.)

Whether or not they can become a basketball brand again and whether or Chuck needs to lean in to outsider status to rebuild demand, Converse isn’t going anywhere. It’s an icon, a blank canvas, ready for any style.

“The main strength working for Converse is their longevity, quality, and clean name in the sneaker space,” Schreane said. “They don’t have to introduce an audience to their name, but more so reintroduce and reestablish themselves.”

—How Etsy crafted a comeback