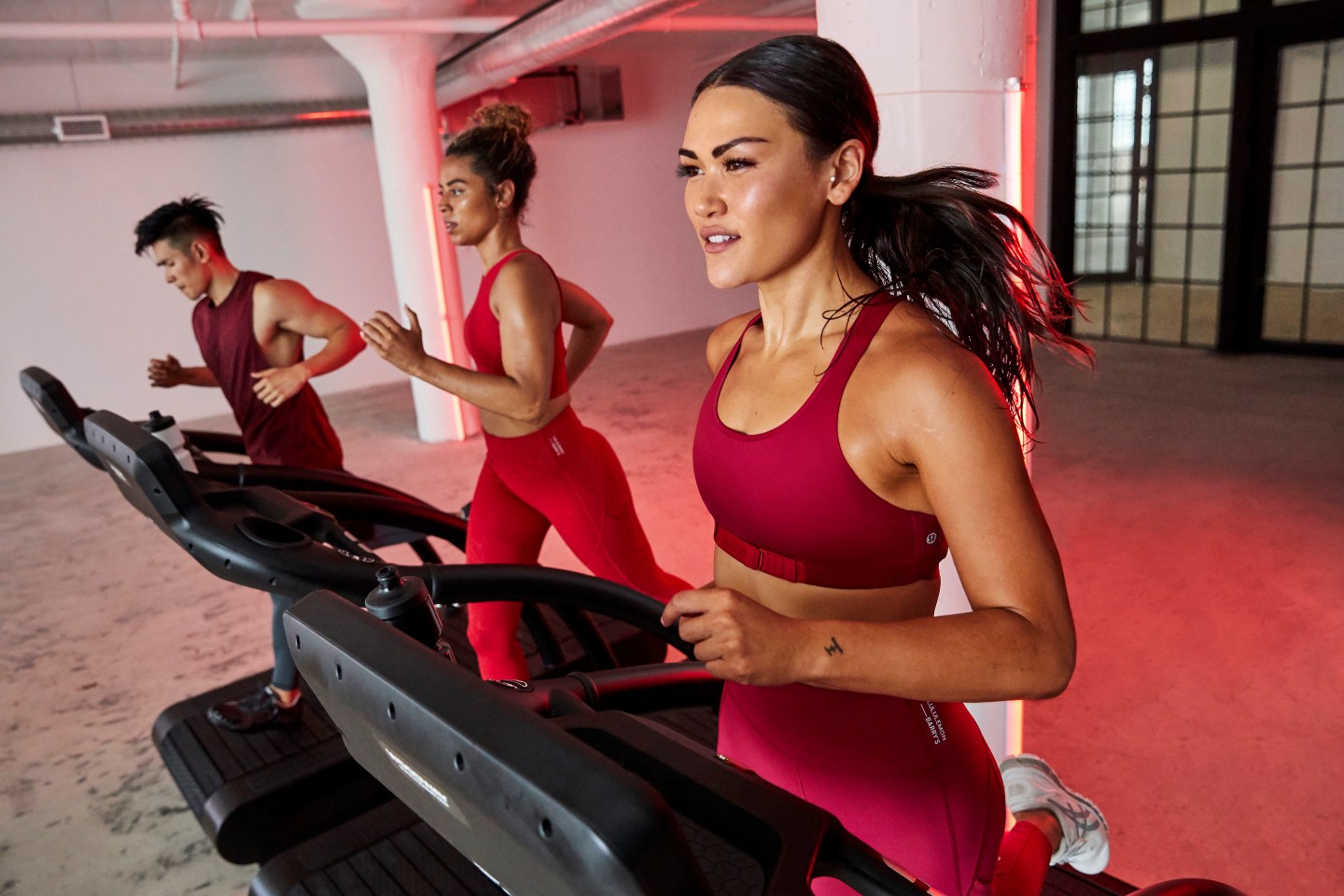 Retail brands promoting each other in the thriving athletic clothing and exercise sectors keeps getting a workout.

The recent entrant is Lululemon Athletica, which this week unveiled a new exercise tog collection produced in partnership with Barry’s Bootcamp, the boutique fitness chain known for its high-intensity interval training—HIIT—workouts.

The 30-piece collection includes hoodies, leggings, men’s shorts, sports bras, t-shirts, totes, and caps. The colors described as midnight maroon, heather red dust, vintage mauve, and chrome, were chosen to look good bathed in the red light of Barry’s Red Room workouts, which involve running, weight-lifting, and aerobics. Prices range from $38 for a baseball cap to $138 for a pair of joggers. The collection is available in select Lululemon stores and all 60 of Barry’s locations in the U.S. and abroad.

Boutique fitness classes have offered other brand’s merch since at least the Jazzercise and dance aerobics craze of the 1970s and 1980s. It was also the era when running, tennis, and other sports became more popular among the average person. Likewise, this spawned an athletic apparel industry—commonly referred to as athleisure—or clothing that’s as common to wear going to lunch or the grocery, as it is to exercise. And while publicity helps sell clothing, there’s no better PR than an attractive, fit person walking down the street wearing a branded product.

Decades ago, an example of cross-branding would have been an exercise studio’s name screen printed on a basic Gildan tee. Today, branding could be printed on Outdoor Voices performance-wear crop tops. In the case of the Lululemon/Barry’s partnership, the garments have a small Barry’s chevron logo next to Lululemon’s insignia

What’s the point of cross-branding? “It’s not really commercial in terms of doing a lot of sales, it’s much more about the publicity,” said Matt Powell, vice president, senior industry advisor for sports at NPD Group, while noting how such merchandise is typically made in limited quantities.

Moreover, Powell said,”Brands are trying to collect as much data on their customers as they can. They want to know what the affinities of other brands are.” But there are limitations to information-sharing. In boutique fitness-athleisure collaborations, vertical brands, including Lululemon, do not share sales data because it’s considered proprietary information.

Lululemon is continuing to expand, while casting off some some earlier missteps. For the first quarter, the Vancouver-based company saw net revenue of $782.3 million, a 20.4% gain against Q1 2018. Comparable store sales grew 8% and e-commerce sales increased 35%, according to the company.

Sweating and the design process

In order to design the collection, the Lulu team surveyed Barry’s instructors in Los Angeles to learn all about their high-intensity training, including sweat and temperature preferences before, during, and after classes.

“There are technical solves throughout the collection so you can focus on your sweat experience instead of your gear,” said Lululemon’s Ben Stubbington, SVP, men’s design. “We made sure to incorporate features like sweat-wicking fabrics, abrasion-resistant panels, and seam reduction for a no-distraction workout. For example, we incorporated low armholes into the women’s cropped tanks for more ventilation, and in our men’s bottoms, we added abrasion-resistant panels for weight lifting.”

Lululemon has produced goods for other fitness chains like Flywheel, SoulCycle, and Peloton, each with their own formidable online clothing stores and in most physical locations.

“In the case of brands like SoulCycle and Peloton and Lulu, you really have very devoted followers, and for another brand to associate themselves with that devoted follower is a great way to bring attention to the brand and bring longer-term business,” NPD’s Powell tells Fortune. He surmises the marketing calculation behind cross-branding to be something like this: “They’re saying, ‘if x-percentage of our customers are using this activity, then there’s an opportunity to mine that relationship and make us that much stronger to the consumer.'”

In a 2017 article, Racked‘s Chavie Lieber described marketing SoulCycle’s branded gear and how design executives bounced ideas off each other. “I was trying to think about words and phrases that our rider feels strongly about, and there are three things that she wants: To ride front row, drink green juice, and be on the cover of Vogue,” a designer said. “So what if we went with those? Just give into the basicness of SoulCycle and give it back to them.” In 2017, SoulCycle reportedly released collections of 40 to 60 new apparel styles monthly, including Nike and Lululemon gear, which the company buys wholesale.

—How Etsy crafted an e-commerce comeback