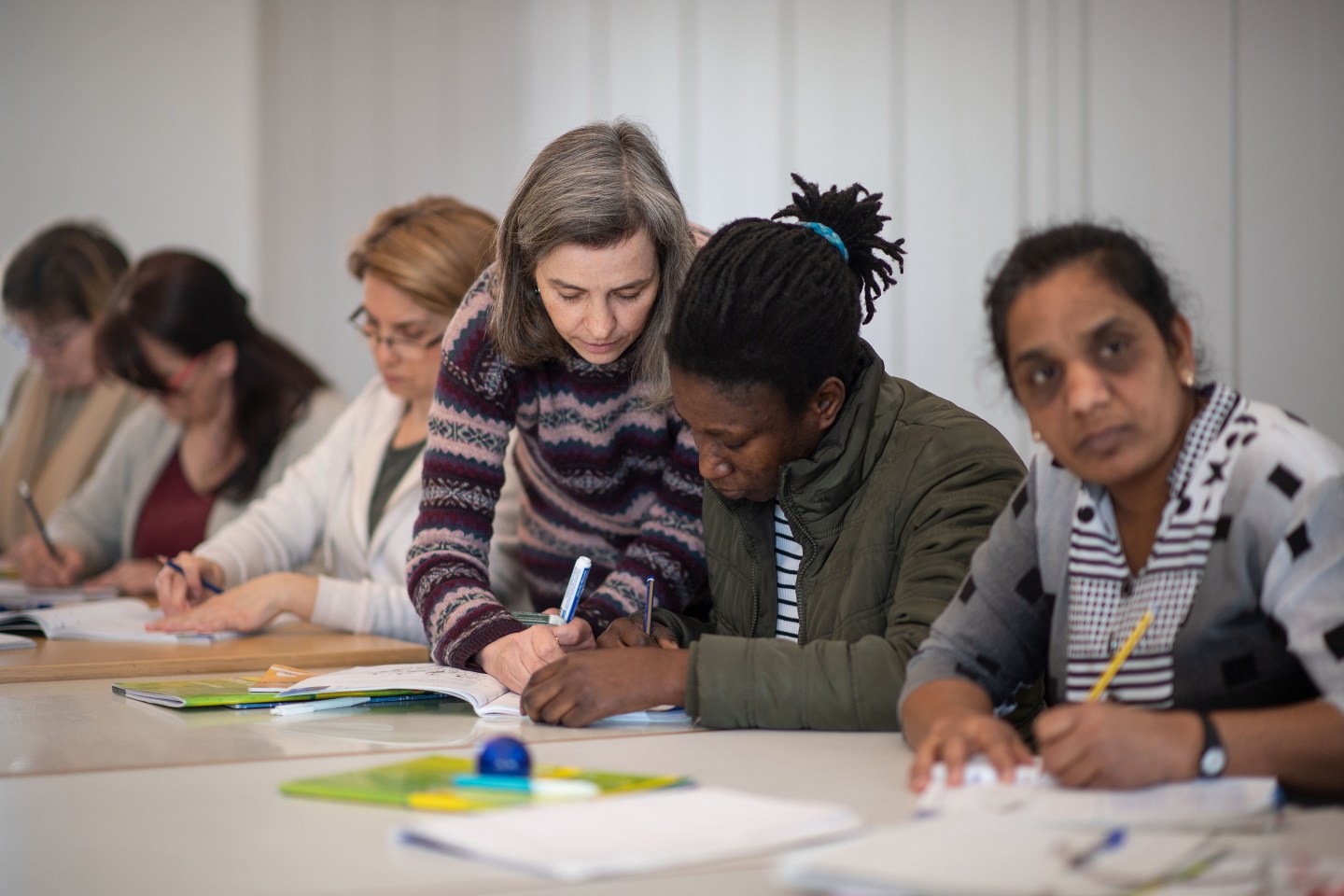 27 March 2019, Baden-Wuerttemberg, Eppingen: Stefanie Graupner (m), teacher of a women's language course, talks to a student. The course is sponsored by the Heilbronn District Office and was originally organised with federal funds. Municipalities warn against the plans of the Federal Ministry of Finance to cut a large part of the federal government's refugee funds to the states. (to dpa "Fewer refugees, less money? Municipalities run storm against Scholz" from 31.03.2019) Photo: Marijan Murat/dpa (Photo by Marijan Murat/picture alliance via Getty Images)
Marijan Murat—picture alliance via Getty Images

Underutilized. Underpaid. Underemployed. And the global economy is $1.4 trillion worse off because of it.

That’s the assessment of an extensive new report covering the untapped economic—not to mention, societal—value of refugee women released on Wednesday by the Georgetown Institute for Women, Peace and Security (GIWPS) and International Rescue Committee (IRC).

Refugee women don’t just face a pay gap worthy of the loudest “equal pay!” chant, they are systematically and routinely shut out of the market by restrictive labor laws, increased threats of violence, all forms of discrimination, as well as regulatory and administrative barriers in their host countries. That all adds up to big losses for the global economy. The report’s authors calculate that were those employment and earnings gaps to be closed, the global GDP would climb $1.4 trillion annually. (Add refugee men and women and the estimate climbs to $2.5 trillion.) Locking refugee women out of the U.S. economy alone costs the country $1.6 billion.

From Washington to Brussels, immigration policy is dividing countries from within, with leaders on the right and left drawing starkly different positions on how to handle the flow of migrants—it’s estimated there are 70 million displaced people around the world—across the border. Hardline politicians and their base want more barriers on new entrants into their home markets. This week, the Trump Administration sought expanded powers to fast-track the deportation of undocumented individuals in the country. Economists and civil rights activists, meanwhile, have repeatedly warned that by excluding this group from the labor market, the entire economy suffers. Refugee parents often are forced to keep their children out of school, and their skills as shopkeepers, artisans and entrepreneurs are never allowed to flourish in the marketplace.

“This is not a zero-sum game,” said Melanne Verveer, GIWPS Executive Director. “When refugee women are gainfully employed, they and their families benefit—along with their communities and host countries. Our findings underscore the need for regulatory reforms and policy change to unlock refugee women’s potential.”

The country-by-country findings make for a tough read. The report found:

A vast disparity in employment rates across the six countries it surveyed. At 40%, the U.S. had the highest refugee women employment rate. Germany, Jordan and Lebanon had the lowest at 6%.

Closing the pay gap and discriminatory labor barriers could boost overall GDP by $53 billion in the six countries studied.

IRC’s president and CEO David Miliband said they plan to use the findings of the report to push policy makers for meaningful change in refugee labor practices. “For example,” he said, “candidates to lead the International Monetary Fund, must be asked if they will continue Christine Lagarde’s focus on closing the gender pay gaps around the world, and how they plan to address the specific issue of women refugees.”