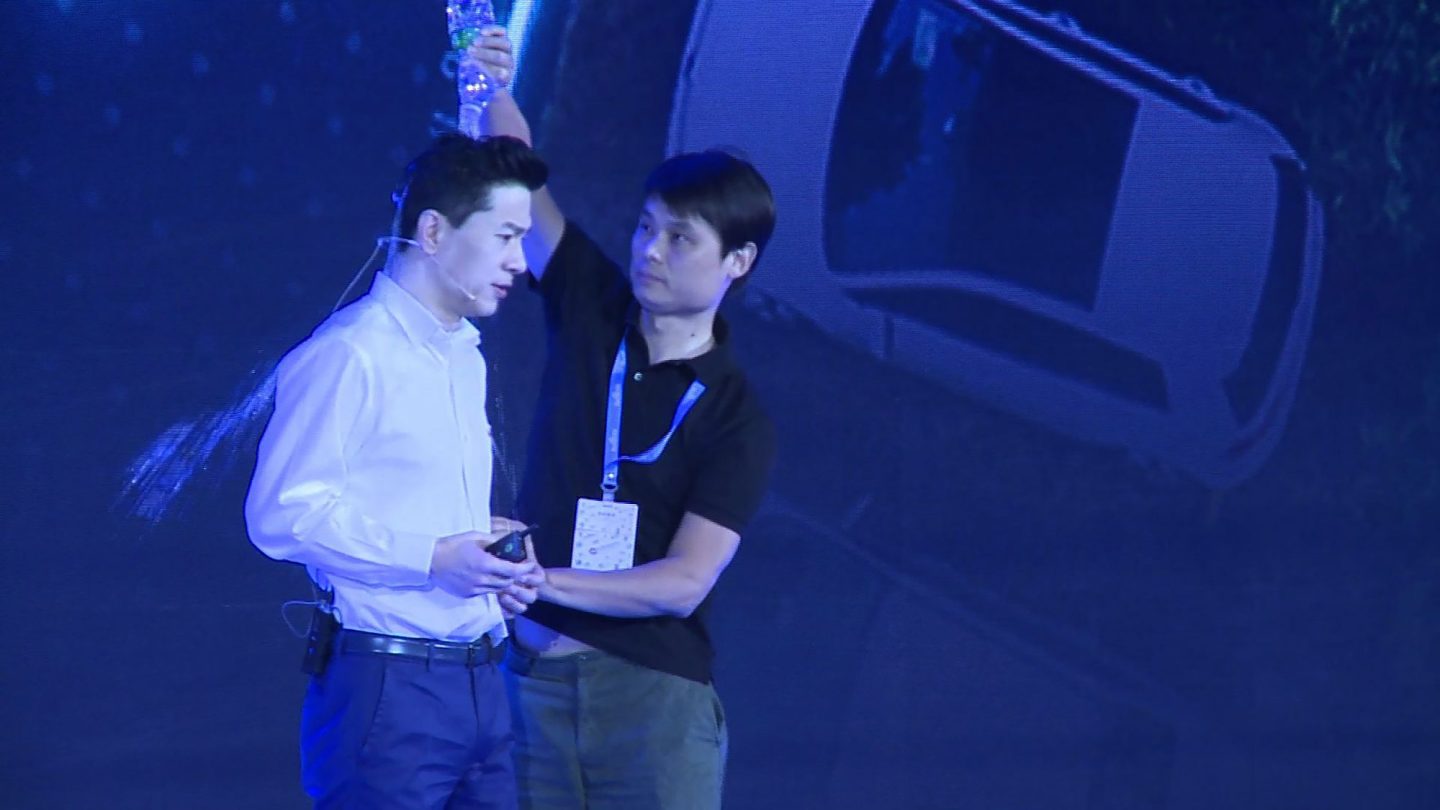 We still don’t know much about the motives of the man who doused Baidu CEO Robin Li at Baidu Create, the company’s annual developer conference, in Beijing last week. Li was onstage before 7,000 people and a phalanx of cameras delivering a presentation on the future of artificial intelligence when his assailant appeared, seemingly out of nowhere, and poured a bottle of water on his head.

I’ve long considered Li the most likable of China’s Internet billionaires. He’s thoughtful, unassuming, and (unusually for a Chinese tech tycoon) has a sense of humor. So it was almost painful to see him so publicly humiliated.

But many Baidu shareholders, not to mention users of the company’s search engine, took delight in Li’s disgrace. Some praised the attacker as a “hero.” On Taobao, China’s leading e-commerce site, vendors did brisk business selling snarky T-shirts and handbags lampooning the incident and Li’s reflexive, English-language response: “What’s your problem?”

In May, the company posted a quarterly loss of $49 million, the first since Baidu’s 2005 Nasdaq debut. One recent survey found a consensus prediction among analysts that Baidu profits will slump 42% in the current year. And Baidu’s share price has tanked nearly 40% since April.

Baidu still gets mentioned as part of the “BAT,” the troika of leading Chinese Internet companies with Alibaba Group and Tencent Holdings. But its market capitalization has shriveled to $40 billion, less than one-tenth that of the other two tech giants. Baidu is now worth less than Meituan Dianping, China’s leading food delivery business, and Beijing Bytedance, an unlisted A.I. rival.

Baidu has struggled since 2016, when users boycotted the company after it was revealed that a university student died of cancer after spending thousands of dollars on a treatment advertised on Baidu’s search engine. The treatment was experimental, but Baidu’s results pushed that critical piece of information far below the paid ads.

In January, veteran Chinese journalist Fang Kecheng attacked the company in an “obituary” entitled “Search engine Baidu is dead.” Fang’s essay, which quickly went viral, alleged Baidu had done nothing to change the way it positions paid results and is less of an index of the Internet and more of an intranet with only sponsored content. The company’s reputation also has suffered from a parade of departures by top scientists.

Baidu’s larger challenge is that its advertising business, which generates about three-quarters of its revenue, has been dragged down by China’s slowing economy. The search giant has been slow to adapt to the mobile age and faces increased competition from other platforms like Tencent’s WeChat.

For investors, though, the question is how long it will take these new wonders to yield a profit.

Pulling the blinds. Remember way back on Monday when Zoom Video Communications said that nasty security vulnerability in its Mac app wasn't a bug, it was a feature, kind of? That didn't last. Zoom is altering its app to eliminate the potential for hackers to trigger your Mac's camera without your permission. Thank you, Zoom.

Fragmentary authority. As the cord cutting wars heat up, AT&T said it would call its new streaming service HBO Max in honor of the red-haired, fictional teen character of the same name in rival Netflix's Stranger Things show. Just kidding–about that last part. The company's Netflix rival will actually be called HBO Max. And it will become the exclusive home for the back catalog of 1990s fave Friends. Sorry, Netflix viewers. In happier news, Google and Amazon agreed to drop their anti-consumer war. Amazon Fire devices will get YouTube once again and Chromecast will get Prime Video.

Thin is not so in. Pour one out for the super-thin MacBook Apple laptop. Never the speediest and limited by having just a single USB-C port, the MacBook was still a triumph of industrial design. Apple discontinued the MacBook while announcing some upgrades to its MacBook Air and Pro lines. And the company finally slashed the pricing of SSD storage to more reasonable levels across its entire line of devices.

Block that block. A federal appeals court ruled on Tuesday that President Trump may not block people on his Twitter feed. "[The] First Amendment does not permit a public official who utilizes a social media account for all manner of official purposes to exclude persons from an otherwise-open online dialogue because they expressed views with which the official disagrees," the panel of three judges wrote.

Shh. Travel in style, or at least quiet, with Uber's new "comfort" option. For a surcharge of 20% to 40%, riders can get picked up in a newer vehicle with at least 36 inches of legroom and can opt for no talky during the trip.

Crime doesn't pay. A few days after fining British Air $229 million over theft of customer data, the United Kingdom's Information Commissioner's Office is back on the beat, this time saying it plans to fine hotelier Marriott International $124 million. Marriott, which disclosed a massive hacking breach last year that included the leak of 30 million European customers' data, said it will contest the penalty.

Puts and takes. Finally, a little bit of M&A news to get you over the midweek hump. Cisco Systems is acquiring optical networking equipment maker Acacia Communications for $2.6 billion. Google is grabbing cloud storage provider Elastifile for an undisclosed price. And IBM closed its largest acquisition ever, the $34 billion purchase of Red Hat.

In the past few weeks, we've been hit by serious though brief outages for apps and cloud services from Google, Amazon, Apple, Facebook and others. TechCrunch's Zack Whittaker has compiled a list of all the big problems and drawn lessons for those of us dependent on our Internet big buddies:

These past few weeks have not looked good for the cloud, shaking confidence in the many reliant on hosting giants — like Amazon, Google and more. Although some quickly — and irresponsibly and eventually wrongly — concluded the outages were because of hackers or threat actors launching distributed denial-of-service attacks, it’s always far safer to assume that an internal mistake is to blame. But for the vast majority of consumers and businesses alike, the cloud is still far more resilient — and better equipped to handle user security — than most of those who run their own servers in-house. The easy lesson is to not put all your eggs in one basket — or your data in a single cloud. But as this month showed, sometimes you can be just plain unlucky.

What Investors Should Know About Virgin Galactic, the First Publicly-Traded Space Tourism Stock By Erik Sherman

If you are as much a fan of the animated films of Hayao Miyazaki as I am, then you don't need a reminder to go watch (or re-watch) classics like Spirited Away, Kiki's Delivery Service, and My Neighbor Totoro. But race, don't walk, to check out Japanese broadcaster NHK's new four-part documentary on the legendary director, all online with English subtitles (and a hat tip to blogger Jason Kottke for the link).