U.S. Airports Open for ‘Terminal Tourists’ to Hang Out, Shop, and Eat 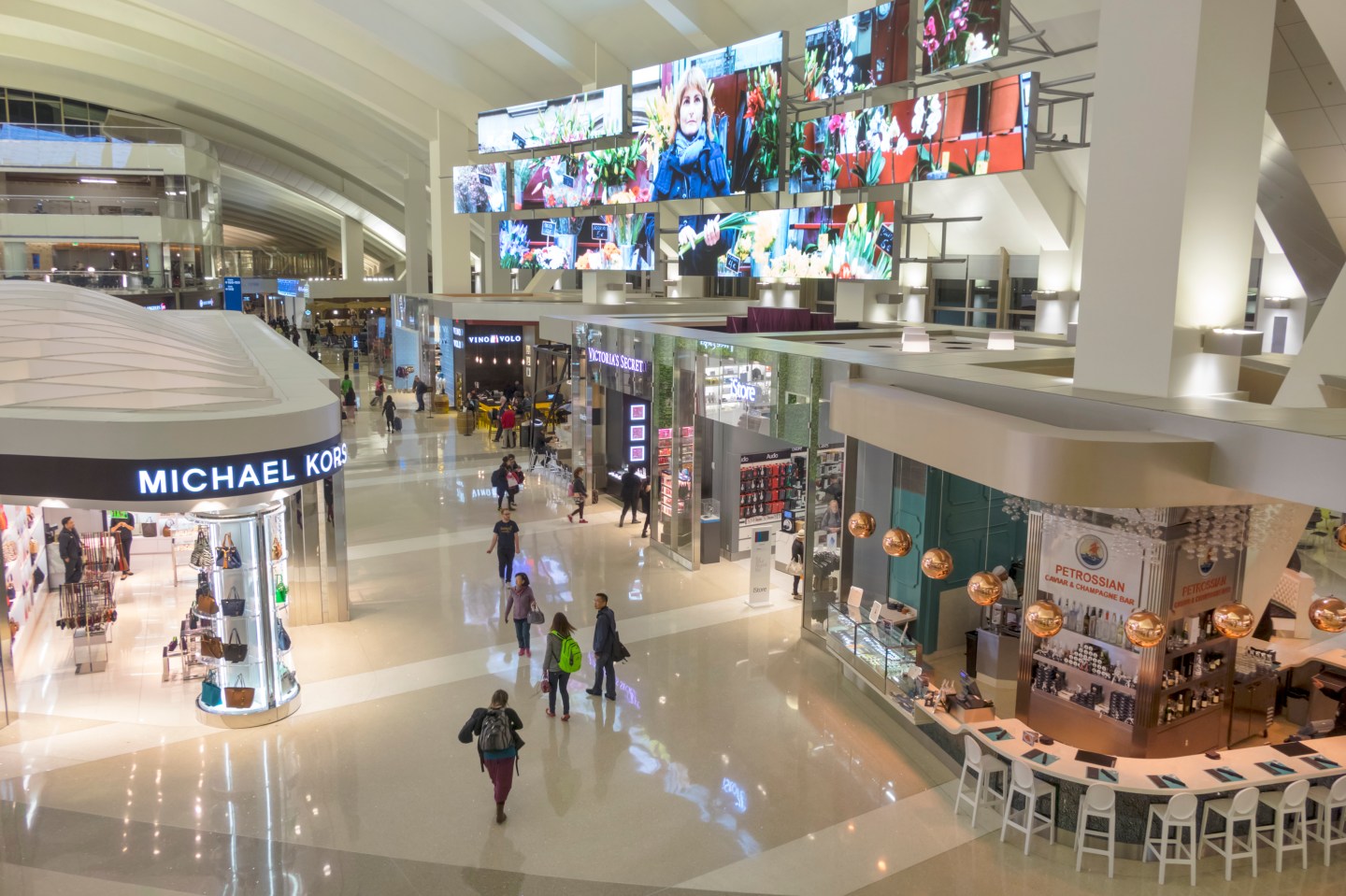 Chuck Hughey braves security lines at Pittsburgh International Airport at least once a week. Not to catch a flight, but to get an ice cream cone or cruise a few of the concourses, which increasingly look like shopping malls.

Is he nuts? Not at all, he will tell you—just a doting grandfather. He and 3-year-old Cleo spend quality time there, riding the trams between terminals and gliding along the moving walkways.

“It’s so convenient, so safe and so secure,” Hughey,  a 72-year-old retired school superintendent, said after a recent visit on what’s called a non-traveler pass. “She loves to look out the big picture window and have a bottle of milk she got from Dunkin’ Donuts and sit there and watch airplanes coming and going and the baggage carriers loading up the planes. We have a great time.”

Hughey’s at the vanguard of a new phenomenon: terminal tourism.

Programs adopted or being considered by a number of airports allow people beyond security checkpoints so they can meet arriving relatives or just hang out. It’s a bit of a return to the days before the 9-11 terrorist attacks, when airport security was more relaxed and you didn’t need a ticket for a flight to get inside.

The programs are taking root as airports expand options to fill passenger dwell time, as it’s called—those often mind-numbing hours after people make it through security and before their flights. Now many airports feature live music and art exhibits. There are spas, microbreweries, playgrounds, gourmet restaurants, clothing stores, and wine bars.

Pittsburgh was the first airport to open up to non-travelers, in 2017, and Tampa started doing so last month. Seattle-Tacoma is evaluating a pilot it tested earlier this year and Hartsfield-Jackson Atlanta International, the nation’s busiest, may seek approval for a trial run. The idea is under consideration in Detroit and Austin.

The seed was planted in 2006, when the Transportation Security Administration allowed access to restaurants and shops for overnight guests at hotels connected to terminals in Pittsburgh, Detroit, and Dallas-Fort Worth. Today, broadening post-security access is an option for any U.S. airport, said Jenny Burke, a TSA spokeswoman.

Some view it as a potential money-maker; officials with the facilities in Atlanta and Detroit figure they might see additional revenue from parking and concessions. A survey of visitors during Seattle-Tacoma’s trial showed people stayed an average 2.5 hours—though they spent only an average $10.29.

At Pittsburgh International, the impetus was popular demand, said Chief Executive Officer Christina Cassotis. She was peppered whenever she appeared at public forums. “In the top five questions was always, ‘Why can’t we go back to the airport and see what’s going on out there?”’

Terminal tourists must have background checks ahead of time and go through the usual TSA security screenings. Each airport will need to continually evaluate security concerns at their location, and weigh those against the benefits of non-traveler access, said Richard Bloom, who teaches aviation security and global intelligence at Embry-Riddle Aeronautical University. After weighing intelligence information and specific vulnerabilities, the program “might be fine for certain locations and not for others,” he said.

Pittsburgh doesn’t limit the number of passes, and between 50 and 150 people use them daily. In Tampa, 100 non-travelers are allowed in on Saturdays. The available slots are fully booked through July and August is filling up, said Danny Valentine, an airport spokesman.

The draw? According to Valentine, it’s the 69 new shops and restaurants that recently opened, including RumFish Grill, with locally caught seafood on the menu, and Cigar City Brewing. The program was “in response to the desire from the public to try some of these.”

During Seattle-Tacoma’s six-week experiment, the daily cap was 50 and about 1,100 people took advantage, most of them to surprise incoming passengers as they disembarked, said Perry Cooper, a spokesman. “People were super excited right off the bat.”

Airports work with TSA to determine the best days of the week and times of day to offer access, and how many visitors to allow. It doesn’t appear to have created any bottlenecks so far, said Christopher Bidwell, senior vice president of security for Airports Council International-North America. “A lot of that is attributable to the fact it is coordinated well at the local level between the airport operator and the TSA.”

There’s concern, though, that some facilities just can’t handle any more foot traffic.

A non-traveler program “is certainly an appealing prospect” as a revenue generator, said Paul Brown, assistant general manager of commercial development at Atlanta’s airport. But the facility’s screening checkpoints are straining to handle passengers, with 4% growth expected this year. Brown said a decision won’t be made until there’s an expansion of screening stations, a proposal awaiting city approval.

In Tampa, “It’s been tremendously popular,” said Valentine. “Not only with people who want to come out to our shops and restaurants, but people who come out to do planespotting, to accompany a loved one or friend to see them off.”