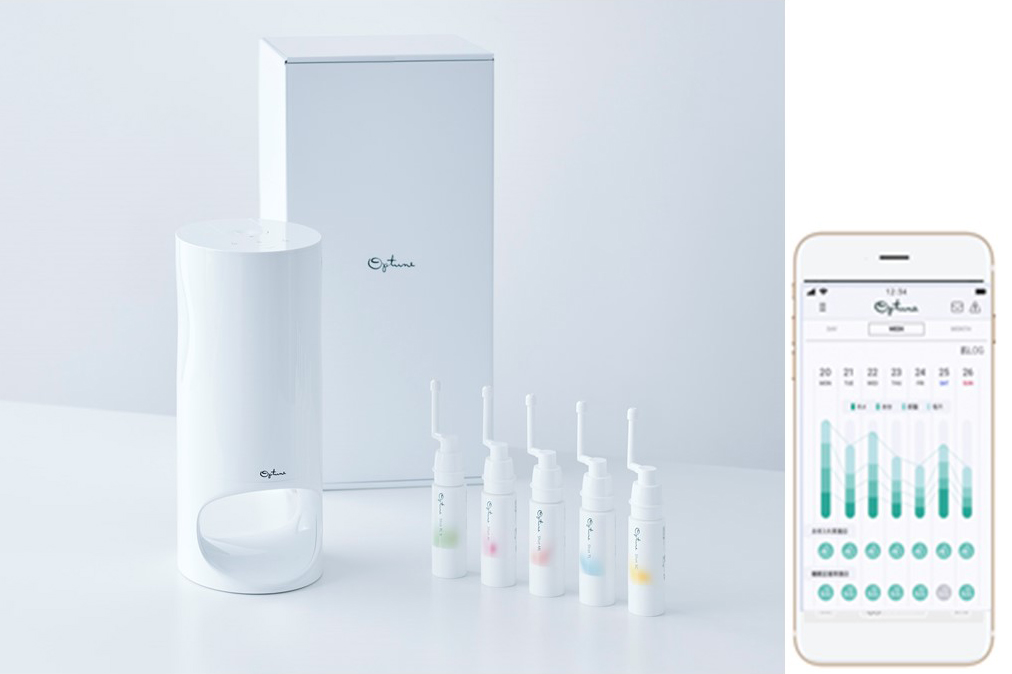 Japanese beauty brand Shiseido has entered the skincare industry’s latest competitive realm with a personalized high-tech moisturizer and serum, formulated by pairing augmented reality and artificial intelligence. Called Optune, it’s one of the first Internet of Things smart appliance systems in the beauty space combining an intelligent app with a physical dispenser.

Optune launched this week in Japan after a year of beta testing.  For about 10,000 yen (or $92) a month, users can assess and modify their skincare regime on a twice-daily basis. The app, which only works with iPhones, collects data from faces using the phone’s front-facing camera. Images are analyzed by A.I. Data is then sent to a cylindrical appliance loaded with five Optimum Shot serum cartridges, which dispenses a lotion formula deemed suitable for users’ skin.

The company said it has identified 80,000 skincare patterns the app can match, based on a user’s daily skin conditions, living environments, and weather. In turn, the Optune dispenser can create 1,000 “patterns of serum and moisturizer combinations” best suited for your skin, the company said.

The app also analyzes skin for “biological rhythm disruption,” measured while a user sleeps. “When users set the sleep measurement function provided, the app detects movement during sleep…and reflects results in the skincare solution provided the next day,” the company said. Other data collected by the app figuring into the personalized lotion are menstrual cycles, mood swings, and environmental factors such as humidity, pollen levels, and temperature.

As in other consumer product sectors, the beauty business is increasingly focused on developing products tied to smart technology.

Industry giants like Shiseido are at an advantage because they have the budget and manpower for in-house technology incubators.

In 2018, L’Oreal teamed up with Apple on a wearable UV sensor that communicates with iPhones in real time, detecting sun exposure. According to a press release, it “measures both UVA and UVB rays, and provides instant status updates while storing up to three months of data.” The sensor is battery-free and activated by the sun, using the iPhone’s “near-field communication” for power. L’Oreal also released a smart hairbrush in 2017, collaborating with Kerastase.

“Consumers are no longer satisfied with just purchasing a product. They want services that bring convenience to their lives and experiences that embody the brand purpose they’ve bought into,” said Laura Gurski, senior managing director, global industry lead for consumer goods and services at Accenture.

A 2018 Technavio report concludes the smart beauty appliance industry will likely see growth of 6% between 2019 and 2023.

As with other wearables, adoption has been slow. “It’s been sort of a mixed response to be honest,” said Sarah Jindal, senior global analyst of beauty and personal care at market research firm Mintel. “The majority of consumers are living on a budget of some sort, so when it comes to a lot of these things that cost $500, or $700, most people just think, what if it doesn’t work for me and I’ve made this huge investment? So [price]…has been a stumbling block for a lot of what we’ve seen…like home laser hair removal.”

However, thanks to the recent popularity of home surveillance appliances and Apple Home integration with kitchen and media appliances, consumers seem to be getting more receptive.

“We’ve seen such a shift in the comfort level with all of the smart technology with all of the stuff people have in their house now, so it’s starting to open up the avenue for acceptance,” Jindal said. “That creates a potential. But price is always going to be a challenge for most people.”

“Moving forward, by combining new digital technologies with the research knowledge we have accumulated, we will continue to further expand personalization in beauty,” Shiseido said in its 2018 annual report.

In 2017, L’Oreal acquired ModiFace, which uses A.I. and A.R. technology for users to virtually try on the brand’s makeup and hair color. (As a startup, ModiFace was presented at the 2016 TechCrunch Disrupt conference in New York.) It also allows for try-on simulations on live video.

According to a L’Oreal spokesperson, “Modiface’s patented AR SDK is the most widely used A.R. technology in the beauty industry; utilized and trusted by over 70 of the top global beauty brands. (That goes beyond L’Oreal’s portfolio.)”

In 2016, Sephora launched its Virtual Artist app, which allows users to upload a selfie and see how makeup from the online store would look on their face.

Drugstore brand Rimmel London launched a “Get the Look” app in 2016, which allows users to take a picture of a beauty look in a magazine, on a billboard, or elsewhere and receive a list of products that would replicate it. CoverGirl, too, launched an app that year, called BeautyU. Both apps seem aimed at mimicking the try-on experience, since drugstore products don’t have testers or beauty counters, unlike prestige cosmetics stores like Sephora or Ulta.

While these apps can be a lot of fun, they don’t always translate to a purchase, Jindal said, because they don’t allow consumers to get a feel for the physical product. “People tend to download the app and move away from it, so the challenge is, how do you get someone to purchase from something like that? With makeup, there really is that thing where you like to try it and smell it and see how it feels,” she said.

Still, these beauty apps have significant value to companies because of the data generated. They allow companies to get a clearer picture of who their consumer is and what they want.

“Even if people aren’t buying, the brand is still getting a ton of information based on engagement with the technology,” Jindal said.

—Is Amazon’s new store for beauty professionals disrupting the industry?