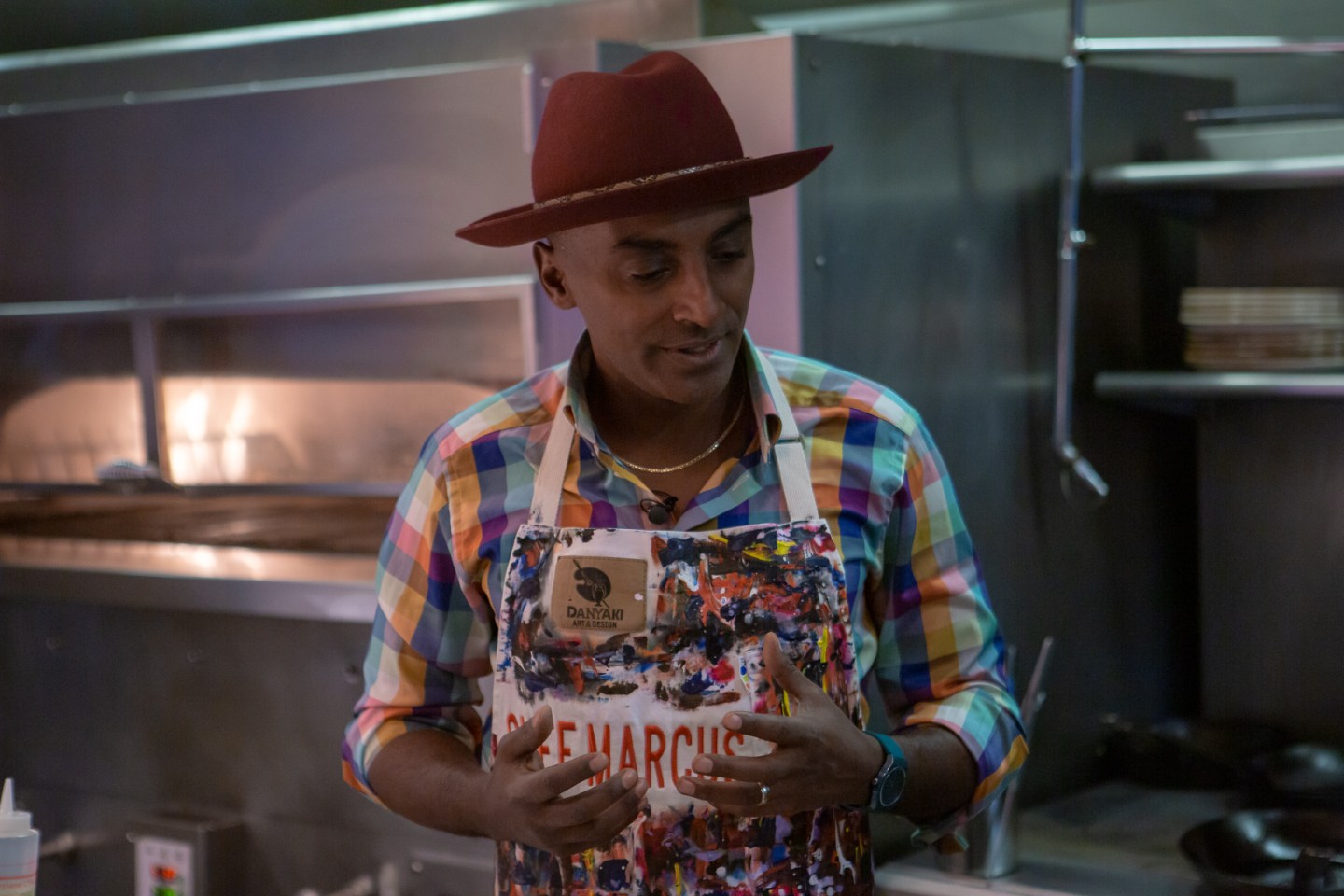 Numerous think pieces and hot takes have already dissected how podcasts have eaten the world in the past few years. (At least since the 2014 debut of Serial.) The audiobook—though a medium that has long existed digitally, as well as in CD- and cassette tape–form—arguably has not necessarily caught on with readers in the same way.

Audible, Amazon’s audiobook subsidiary, has been seeking to change that with a subscription model and support for virtually every mobile device, from Android phones to the Apple Watch (and, of course, every Alexa-inhabited piece of hardware available).

Collaborations with celebrated authors are also crucial, but the latest project goes beyond what might have been thought possible—especially for something as critically visual as a cookbook, of all things.

This June, chef Marcus Samuelsson and Audible will release Our Harlem: Seven Days of Cooking, Music, and Soul at the Red Rooster, an audio production that aims to redefine the cookbook experience for the audio space while celebrating identity and culture through food.

Samuelsson, a James Beard Award winner multiple times over and the youngest person to ever receive a three-star review from the New York Times, recently spoke with Fortune about the project and what the evolution of audiobooks could mean for the future of culinary publishing.

Fortune: Our Harlem feels like a memoir-meets-cookbook and even a love letter to the neighborhood that is home to your most famous restaurant: Red Rooster Harlem. What inspired you to launch this project as an audiobook versus a print version?

Marcus Samuelsson: I was intrigued by the space, especially as a new space for cookbooks. I think this is very exciting. As a chef, I’ve always been so inspired by great storytellers, whether it was Anthony Bourdain or Leah Chase, and the way they told stories through a diversity of mediums.

How does the audiobook complement, or even replace, the traditional cookbook experience?

I think there’s room enough for both, especially because they are very different experiences. Overall, I think there aren’t going to be fewer cookbooks—there’s going to be more of all types. Our Harlem will hopefully not only drive people to Harlem and the restaurant, but also to read even more cookbooks.

Our Harlem is a very intimate listen. You can pick up sound in a way that gets you closer than what a traditional cookbook could do.

How do you see audiobooks pushing food and culinary publishing forward?

I think television was massive in terms of making food and cooking a more democratic space, and the Internet had the same impact—that made it a global conversation. Then social media changed it again, bringing food and cooking to everyone everywhere. And I think the audio cookbook could be next. At the end of the day, having more people cooking and breaking bread together, getting to know different communities and cultures—this is a way to do that.

What were some of the obstacles in translating this into a cookbook compared with previous literary projects?

Anytime you do something brand-new, it’s about building trust. Neither of us [Audible or I] had done this before, so it was the excitement of thinking about how we actually do this through trusting and leaning on each other.

How else would you like to play with the audiobook form? What kind of potential is there for young chefs, authors, and entrepreneurs when it comes to digital storytelling?

I think this is just the beginning, and I’m already excited. I think we’ve just scratched the surface, and digital storytelling will continue to provide a voice and make storytelling more democratic and diverse.