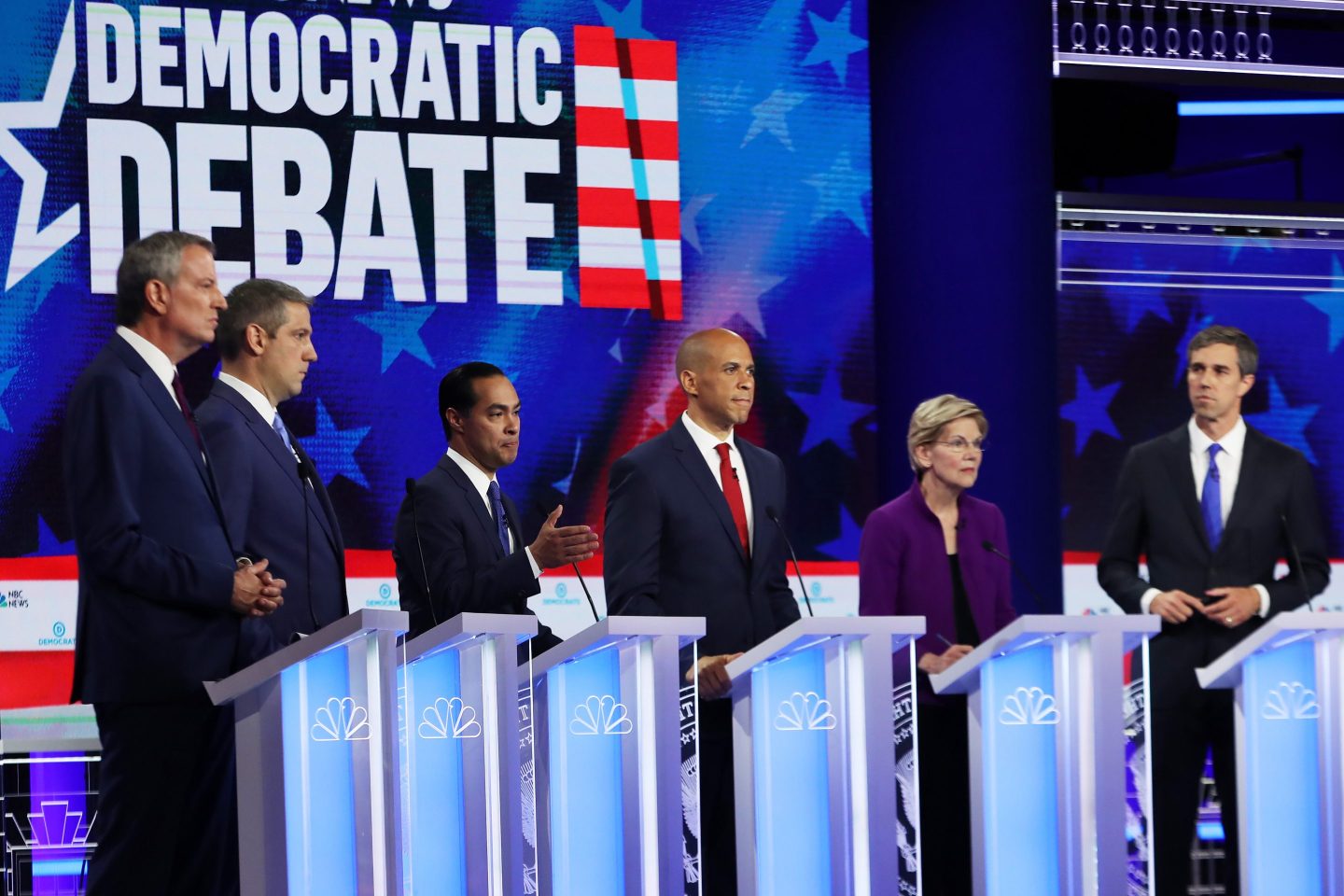 The first night of the 2020 Democratic debates was loaded with hot-button issues such as health care, gun control, and immigration. Hosted by NBC in Miami, round one included just 10 of the 24 Democrats vying for the White House.

Single-issue candidates like Governor Jay Inslee (climate change) and Rep. Tulsi Gabbard (foreign policy) got their moments to shine, and Julián Castro was able to dive into the details of his immigration reform plan, but it remains to be seen if single-issue voters were all satisfied by Wednesday’s debate. With 10 presidential candidates and just two hours of airtime, not every subject made the cut.

Reparations for black Americans has been in the spotlight during this campaign cycle, especially following the House Judiciary Committee’s Juneteenth hearing on the matter, but the subject was absent from the debate stage.

Many candidates addressed the need for criminal justice reform and changes in police enforcement. Sen. Cory Booker, formerly the mayor of Newark, New Jersey, spoke of the gun violence he sees living in a majority black and brown community. New York City Mayor Bill de Blasio said he’s had to have serious talks with his black son about “how to protect himself in the streets of our city and all over the country.” Still, while race and discrimination were addressed, reparations were not mentioned.

NBC’s debate moderators attempted to breach the subject of a wealth tax, but former congressman Beto O’Rourke, to whom the question was addressed, spoke more about raising the corporate tax rate (a subject on which many Democratic 2020 contenders agree). Indeed, most of the candidates had a fair amount to say about the need to break up corporate concentrations.

Not even Sen. Elizabeth Warren used the stage to champion her proposed ultra-millionaire tax. This is despite the fact that more than a dozen of the country’s richest citizens—including George Soros, Abigail Disney, and Facebook co-founder Chris Hughes—recently published an open letter to the 2020 candidates calling on them to pass such a measure.

The debate moderators also didn’t press the issue of infrastructure, even though two of the candidates present have outlined plans to address the subject. Sen. Amy Klobuchar released a $1 trillion plan in March, outlining how she aims to connect households to the internet by 2022 and rebuild U.S. highways, public transit, and more with sustainable solutions. Former congressman John Delaney has proposed $2 trillion to reach similar goals.

Despite the price tag and potential impact of these plans, the issue of infrastructure was left out from the debate. Instead, many of the candidates spoke about topics such as the need for green energy investment and remodeled manufacturing. Congressman Tim Ryan in particular addressed the need to remain accountable to those losing their jobs to factories overseas.

Finally, the participants on Wednesday night’s stage came with varying degrees of political experience—a fact all but Klobuchar left untouched (Klobuchar said her peers could not match the amount of legislation she’s sponsored or co-sponsored). Although President Donald Trump won the 2016 election without having previously held elected office, some 2020 Democrats are likely to take similar shots at the resumes of their opponents when the field narrows.

Most candidates are current or former members of Congress, while others hail from state or even municipal offices: de Blasio is mayor of the nation’s most populous urban center New York City, and Inslee is governor of Washington. Castro, meanwhile, served as Secretary of Housing and Urban Development in the Obama Administration.