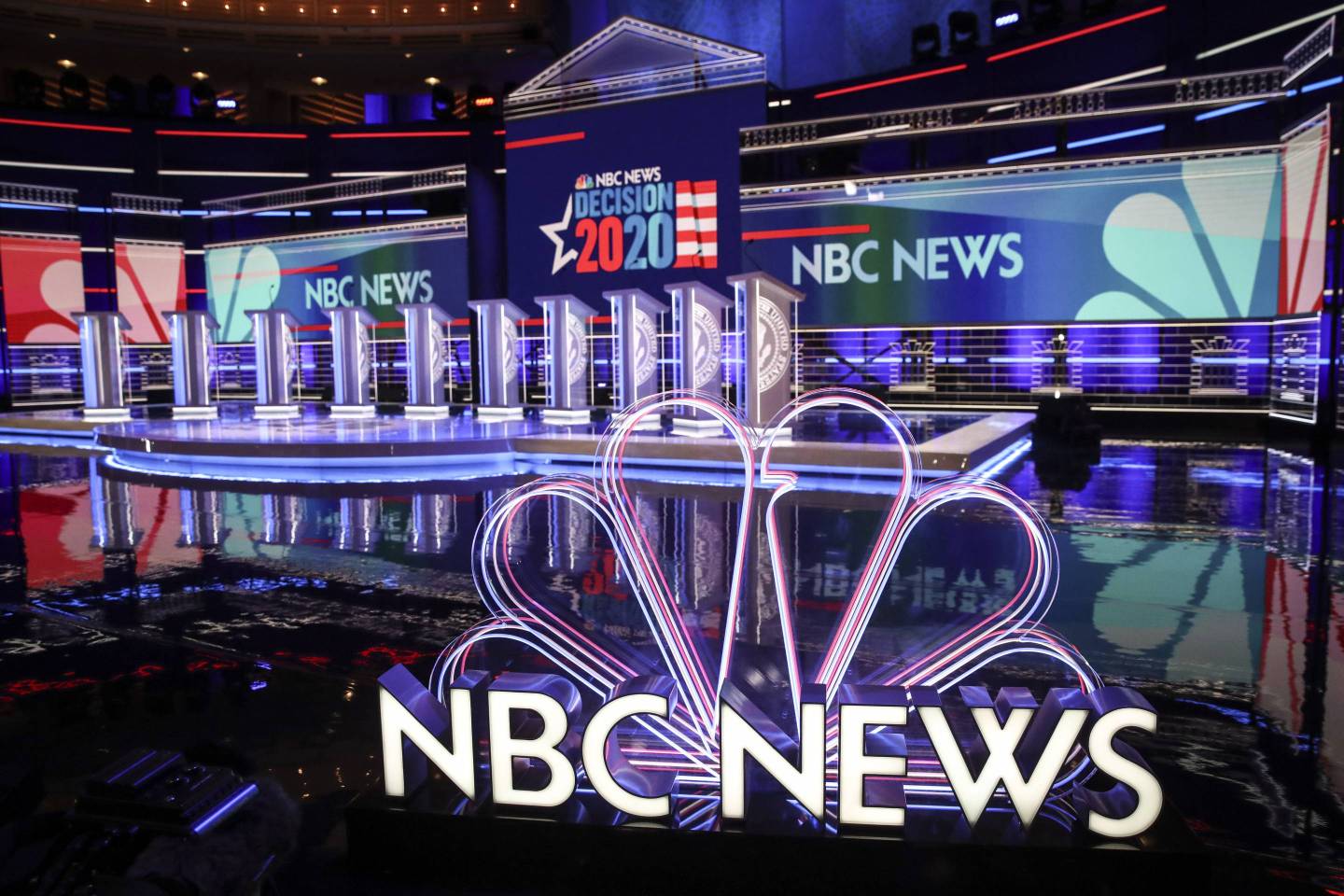 MIAMI, FL - JUNE 26: The stage is set for the first Democratic presidential primary debate for the 2020 election at the Adrienne Arsht Center for the Performing Arts, June 26, 2019 in Miami, Florida. A field of 20 Democratic presidential candidates was split into two groups of 10 for the first debate of the 2020 election, taking place over two nights at Knight Concert Hall of the Adrienne Arsht Center for the Performing Arts of Miami-Dade County, hosted by NBC News, MSNBC, and Telemundo. (Photo by Drew Angerer/Getty Images)
Drew Angerer Getty Images

As the first Democratic presidential debate on Wednesday may be seen in boxing parlance as the undercard match, Thursday’s highly anticipated matchup will definitely be the main event.

Four of the 10 leading Democratic candidates in the polls will face off in Miami to these posing issues: Will Bernie Sanders waste no time and go all-in on former Vice President Joe Biden? Will Biden, the early frontrunner, take a “Joe vs. Everybody” mindset to stave off a possible pile-on from the other candidates? Which candidate will be called “too progressive”?

And how many times will President Donald Trump’s name be mentioned?

“There’s definitely going to be a Hunger Games-type mentality,” said Dan Sena, former executive director of the Democratic Congressional Campaign Committee. “Each candidate has been cross-training for the moment where they can emotionally connect with Americans.”

Brian Sobel, a San Francisco Bay Area political analyst, agrees. He thinks each of the 10 candidates needs to have standout remarks and a snappy closing to separate themselves from the pack.

“For at least half of them, they have to embody the traits of a viable presidential candidate as there may not be enough time to go after your opponents as you really have to make a case for yourself,” he said.

Besides talking about Trump, the topics of health care, climate change, and immigration will surely be up for debate, Democratic National Committee Chairman Tom Perez told MSNBC on Wednesday.

“Elections are about the future and what voters want to know is who’s going to have my back on the issues that matter most, and what we’ve seen is that Donald Trump said he was going to have your back on healthcare and other things and he’s got a knife in people’s backs,” Perez said.

Here are five things to watch out for:

Can Biden withstand an onslaught?

Despite leading his fellow 24 Democratic contenders by a comfortable margin in many polls, it won’t come as a surprise if Biden faces scrutiny during the debate. Many, including California Senator Kamala Harris, may confront Biden for his recent controversial comments. Biden said during his six terms as a Delaware senator he dealt with some segregationist Southern Democratic colleagues whom he didn’t always agree with, but was able to be civil to in order to get things done. Although Biden tried to clarify his comments, Harris and Sen. Cory Booker were among the most outspoken candidates on the issue.

“This could be an early test on whether Joe will be the experienced statesman and the adult in the room, or if this pulls him in with the rest of the candidates because of a generational mindset,” said Sena, referring to a recent “generational change” comment from Pete Buttigieg. “Joe will have to decide who he is.”

Sobel thinks Biden will not play games with the other candidates and will likely stick with, “‘Here’s why I am worthy of being the President of the United States….vote for me.'”

Will Sanders seize the moment?

While the Vermont Senator is in second place in most polls (and beating Trump) in others, many wonder how he will respond to sharing the same stage with Biden. Will Sanders go “Full Bernie” at Biden for supporting the Iraq War and free trade deals. Or will Sanders tout himself (and his new plan that would cancel all student loan debt) and seek a moment that could go viral on social media.

“Sanders is going to be Sanders, but he isn’t going to be disorderly,” Sobel said. “He’s got a story to tell, and he’s got his message really honed about taking from the rich and giving to the poor, and health care for all. Sanders has become well-rehearsed. He will stay on point this time around.”

How much will immigration spark debate?

Sena said immigration will lead to several moments for candidates as it will be a chance to attack the Trump administration. The candidates will likely discuss the House of Representatives passing a $4.5 billion border aid bill, and the unsettling images released showing the bodies of immigrants Oscar Alberto Martínez and his 23-month-old daughter, Angie Valeria of El Salvador, who drowned while trying to cross the Rio Grande.

“The question is which candidate can capitalize the discussion in the most emotional way,” he said.

Will Trump live tweet his way into the discussion?

Of course, there’s the matter of whether President Trump will inject himself into the debate by live-tweeting his comments to rouse up his base, despite reportedly being told by some advisers not to do so. Trump tweeted several times about Wednesday night’s debate.

“I sense that Trump will stay in the lane of branding all democrats as socialists,” Sena said. “Any of the moments that seem a bit further left than the Democratic mainstream, the president will be quick to pounce on them and say they are all out of touch. That’s what he loves to do.”

What about the other six candidates who need a boost?

Sena said candidates including California Congressman Eric Swalwell, Senators Michael Bennet, and Kirsten Gillibrand; John Hickenlooper, the former governor of Colorado; writer and religious activist Marianne Williamson, and businessman Andrew Yang will “all be fighting to create a moment for their campaign to break through each other’s noise.”

Sena adds as some candidates will have to differentiate themselves, there will be increasing friction. He said future debates could see candidates saying to each other they would be great cabinet members for an incoming Democratic presidential administration.

“They will start putting each other in boxes, and say ‘That’s great for what a Vice President or a Secretary of State would do, not a president,’ or ‘You would be a great cabinet member, but you’re not ready for the top shelf,'” he said.

Sobel thinks the low-polling candidates are long shots and Thursday’s debate will likely not help them resonate with voters.

Perez, the DNC chair, when asked by MSNBC if he thought the first debates will possibly thin the field of Democratic candidates, he believed that it may be too early for him to make that assessment.

“That’s going to be up to the voters and the candidates,” he said. What our job is to make sure everyone gets their fair shake on the stage and beyond to communicate their vision.”