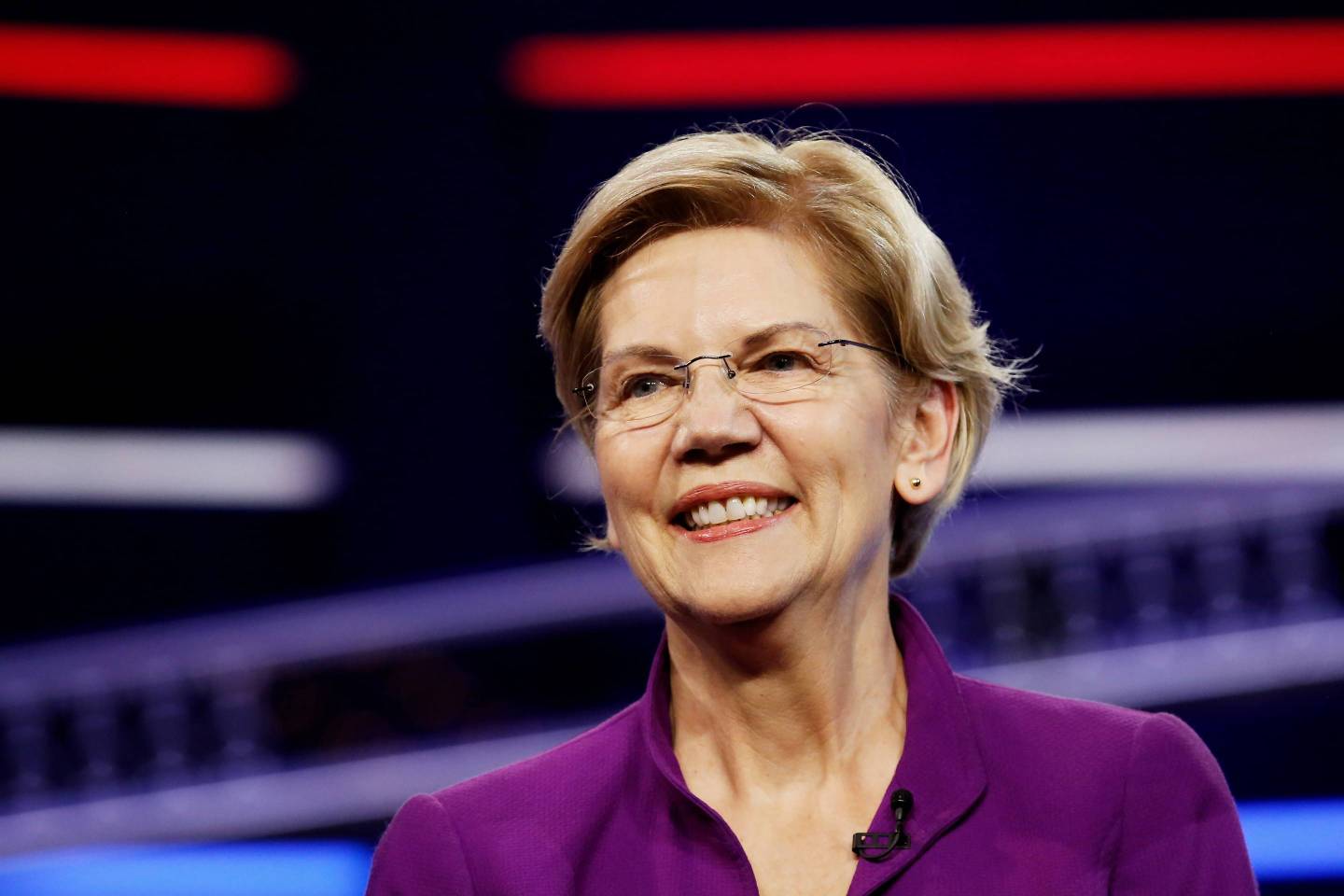 MIAMI, FLORIDA - JUNE 26: Sen. Elizabeth Warren (D-MA) takes the stage during the first night of the Democratic presidential debate on June 26, 2019 in Miami, Florida. A field of 20 Democratic presidential candidates was split into two groups of 10 for the first debate of the 2020 election, taking place over two nights at Knight Concert Hall of the Adrienne Arsht Center for the Performing Arts of Miami-Dade County, hosted by NBC News, MSNBC, and Telemundo. (Photo by Drew Angerer/Getty Images)
Drew Angerer Getty Images

Wednesday night’s inaugural Democratic debate for next year’s race for the White House was every bit as contentious and lively as pundits predicted, with the field of 10 candidates all touting their support for universal health care, immigrants’ rights, taxing corporations and reforming gun laws—while speaking at times in Spanish if the opportunity presented itself.

Night one of the 20-candidate event spread over two nights included candidates interrupting one another, interrupting moderators, sometimes insulting one another, or even complimenting their rivals occasionally. A technical glitch occurred midway through the two-hour event in Miami, as moderator Chuck Todd indicated he and fellow moderator Rachel Maddow were hearing the microphones of the moderators who’d handled the first hour. The issue prompted a break while debate organizers at the 2,200-seat Arsht Center for the Performing Arts repaired the audio.

The candidate spreads for Wednesday night and Thursday night in Miami were chosen at random by NBC, and U.S. Sen. Elizabeth Warren of Massachusetts fulfilled pundits’ predictions that she would perform well as the highest-polling candidate in her field of 10 on the stage. Warren carefully outlined various plans that all fell under the umbrella of paying attention to the little person, ending the trend of breaks to large corporations, and doing real research on national problems like gun violence.

“Just who is this economy working for?” asked Warren. “It’s doing great for a thinner and thinner slice at the top.”

As of Wednesday, Warren was polling as third from the top of Democratic candidates behind former Vice President Joe Biden and U.S. Sen. Bernie Sanders of Vermont.

Political observers agreed Warren won the debate but other lesser knowns successfully seized the opportunity to stand out, interjecting often with solid concepts.

“Many of them were quite strong tonight,” said Democratic strategist Rebecca Katz, who was watching from the audience in Miami. “I thought Warren won early on with her plans and folks had to react to things that she laid out. I thought Castro and maybe de Blasio did the best of breaking through a little bit and making folks interested in their candidacies.”

“If you had to name a winner, I think it was probably Elizabeth Warren simply because she had the clearest and most coherent sort of approach to everything that was asked,” political consultant Ed Kilgore said. “She never went over time, she never shouted, she never had to beg for attention.”

Over the course of the two hours, some verbal sparring over immigration became heated as Castro condemned Section 1325 of the U.S. Code that, he said, authorities have used to justify the separation of children at the U.S.-Mexico border from their families. And he attacked fellow Texan and Democratic candidate Beto O’Rourke, a former congressman, for not calling for the section’s repeal.

Booker, who frequently mentioned during the debate that he lives in inner city Newark, said such treatment of children happens not only at the border but in communities at the hands of U.S. Immigration and Customs Enforcement.

De Blasio said the images that surfaced this week of a Salvadoran father and daughter who drowned in the Rio Grande at the border should pull at the heart strings of every American. Anyone who thinks immigrants are to blame for hardships in their lives is engaging in faulty thinking, he said.

“The immigrants didn’t do that to you, the big corporations did that too you,” de Blasio said. “The one percent did that to you.”

Ryan made several impassioned mini speeches during the night—as long as the 60-second time limit for answers would allow—including one in which he lamented that U.S. inmates at Guantanamo Bay, Cuba, are treated better than immigrants detained at the border with Mexico.

“What kind of country are we running here when we have a president of the United States that’s so focused on hate and fear and vision?” Ryan asked.

Along with Maddow and Todd, Lester Holt and Savannah Guthrie of NBC News, and Jose Diaz-Balart of Telemundo and NBC News, also moderated.

The Democratic National Committee chose to spread the first debate over two nights because of the large number of candidates who qualified to take part based on number of donors and poll numbers. The highest-polling candidates—Warren and O’Rourke—were at center stage, while the lowest polling candidates—de Blasio and former U.S. Rep. John Delaney of Maryland—held up the ends.

The opening debate stood out not only for its energy, but also because three women were on the stage. U.S. Sen. Amy Klobuchar vowed she would never be influenced by big pharma and U.S. Rep. Tulsi Gabbard of Hawaii said her extensive military experience would serve the country well. At one point, when Washington state Gov. Jay Inslee touted his work supporting a woman’s right to abortion, Klobuchar interjected, “I just want to say there are three women up here who have fought pretty hard for a woman’s right to choose.”

Conversations on criminal justice, race, and gun control also summoned lots of emotion among the candidates with Booker saying seven people were shot in his neighborhood just last week and calling for more attention to harassment and murder of black trans Americans.

O’Rourke said the country needs to stop warehousing the mentally ill in prisons and those with mental challenges need access to the help and support they need.

Night two of the debates takes place at 9 p.m. E.T. Thursday with a lineup of 10 more candidates led by frontrunner Biden.