Who is Masai Ujiri? Meet the Man Many Are Crediting for the Toronto Raptors’ NBA Championship 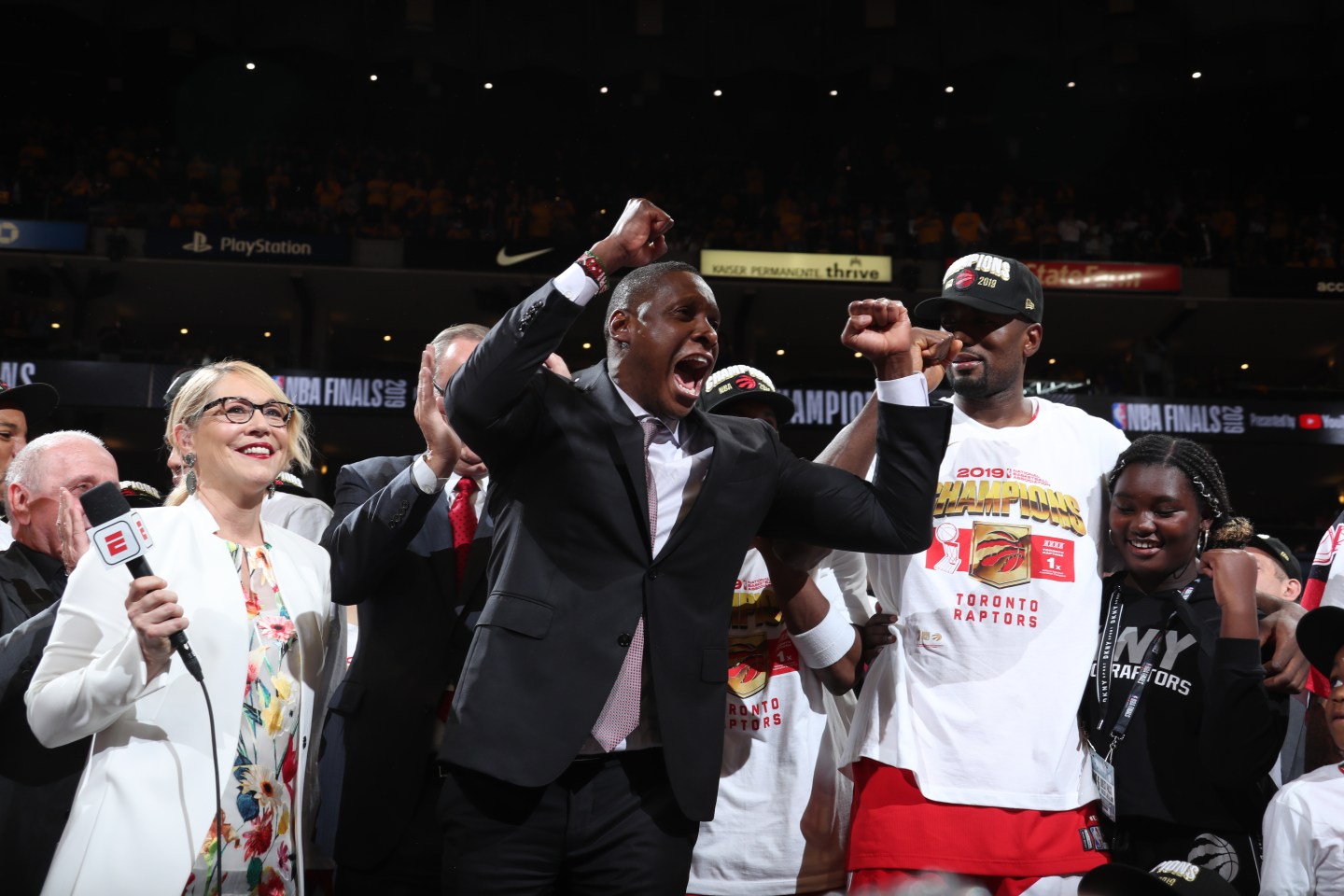 OAKLAND, CA - JUNE 13: Masai Ujiri of the Toronto Raptors celebrates after winning the NBA Championship against the Golden State Warriors in Game Six of the 2019 NBA Finals on June 13, 2019 at ORACLE Arena in Oakland, California. NOTE TO USER: User expressly acknowledges and agrees that, by downloading and/or using this photograph, user is consenting to the terms and conditions of Getty Images License Agreement. Mandatory Copyright Notice: Copyright 2019 NBAE (Photo by Nathaniel S. Butler/NBAE via Getty Images)
Nathaniel S. Butler—NBAE/Getty Images

During a crucial moment in the pivotal Game 3 of the NBA Finals, an immaculately dressed man is furiously pacing in the bowels of Oracle Arena checking his smartphone.

He’s usually too nervous to watch the game courtside or up in a suite. After all, it was his calculated high-risk, high-reward moves that got the Raptors here in the first place. Eleven months ago Masai Ujiri, Toronto Raptors president of basketball operations, stunningly traded away his best player, and then shockingly fired his head coach, who ironically was named the league’s coach of the year.

Fast forward nearly a year later, the Raptors are now the 2019 NBA champions. A champagne-soaked Ujiri’s reaction on Thursday? “Unbelievable.” Ujiri’s also being hailed as a “genius” for executing arguably two of the boldest deals in recent sports history.

“I really don’t see it like that, to be honest with you,” said Ujiri, wearing a cap that reads “The Best in the World,” (created by Raptors superfan Drake’s OVO brand) to reporters surrounding him. “There are so many moves you want to make, and there are so many deals that don’t work, and you’re like, ‘Wow, I’m glad I didn’t do that!’
“To call it risks and gambles, that’s our job. We have to do it.”
Feeling desperate, Ujiri, despite the Raptors winning 56, 51, 59 and 58 games in four consecutive seasons, but with no championships to show for it, last year dealt the team’s best player, All-Star DeMar DeRozan to the San Antonio Spurs for fellow All-Star Kawhi Leonard who was coming off a severe foot injury. The move was so devastating to DeRozan’s best friend, longtime Raptors star guard Kyle Lowry that he famously didn’t talk to Ujiri for months.
“It was a gutsy move that paid off,” said longtime Raptors assistant coach Jim Sann holding a bottle of champagne after his team beat the Golden State Warriors 114-110 Thursday to clinch the NBA Finals 4-2. “We had to trade talent to get talent.”

The usually reclusive Leonard, the Finals MVP, revealed in a postgame press conference late Thursday that he texted a then-despondent Lowry shortly after the trade. Leonard told Lowry, “Let’s go do something special. I know your best friend left. I know you’re mad, but let’s make this thing work out. And we’re here today.”

Ujiri is simply a “genius for such a boss move,” said Jalen Rose, a former Raptors star and current ESPN personality as he stood courtside watching scores of Raptors fans celebrating inside Oracle Arena Thursday night.

“I just told Masai that again—he’s a genius,” Rose said. “He changed the game and he rolled the dice like nobody we’ve ever seen in his position before. And, remember, he let Dwane go, too!”

That would be former Raptors head coach Dwane Casey, who Ujiri fired last May after leading Toronto to a franchise-record 59 wins before being swept by the Cleveland Cavaliers in the Eastern Conference semifinals for the second straight year. Casey was later named the 2018 NBA Coach of the Year and hired by the Detroit Pistons.

But Ujiri’s bold move was seen almost maniacal. Some thought it might soon be his job on the line when he dismissed Casey and hired the relatively-unknown Nick Nurse, a respected coach among players and his peers who had won championships in the NBA’s developmental league.

Before Thursday’s title-clinching victory, Nurse praised Ujiri for taking a huge chance on him.

“(Ujiri) set the goals very high for our organization, similar to what the goals that our staff and our players set, so that’s good to be in alignment with where we’re thinking, where we want to go,” Nurse said. “He’s put together a heck of a roster, and some great players and the blend is really good.”

Ujiri returned the praise to his team. “For me, it’s not all about the moves I made or we made, it’s about the players and the coaches and how they performed under such intense pressure,” he said. “I tell you our jobs isn’t as hard as their jobs.”

Ujiri, who came to the Raptors in 2013, the same year he won the NBA Executive of the Year award as the general manager of the Denver Nuggets, further said Thursday that as an executive you have to make sure the players mesh with each other and the team’s philosophy to have great chemistry.
“We can say potential all we want, but at the end of the day, sports is about winning,” he said. “You have to figure out that balance between younger players and veteran players, star players, and All-Star players, really a team effort.
“And then you have to be lucky.”
But that luck may run out. There’s a price that comes with the cost of winning. Leonard was basically a one-year rental for the Raptors as he’s scheduled to become a free agent in July. Even though the Raptors could offer him as much as $200 million over five years, the Southern California native may not want to play in Canada and instead choose to join the Los Angeles Clippers or Los Angeles Lakers.
As for Ujiri, he reportedly may be offered an executive role to run the NBA’s Washington Wizards in a deal that could pay $10 million annually and an opportunity to be a part of the ownership group that owns the basketball team and the NHL’s Washington Capitals, a team that won the Stanley Cup a year ago.
However, Ujiri might have to handle some legal matters first. He may face misdemeanor criminal charges for allegedly pushing and hitting a sheriff’s deputy in the face Thursday after the game. Authorities say the deputy denied the Raptors exec access to the court for the postgame championship ceremonies because Ujiri didn’t have proper credentials.
Reportedly, it was Lowry, the player who didn’t speak to Ujiri for months, who vouched for him to the authorities.