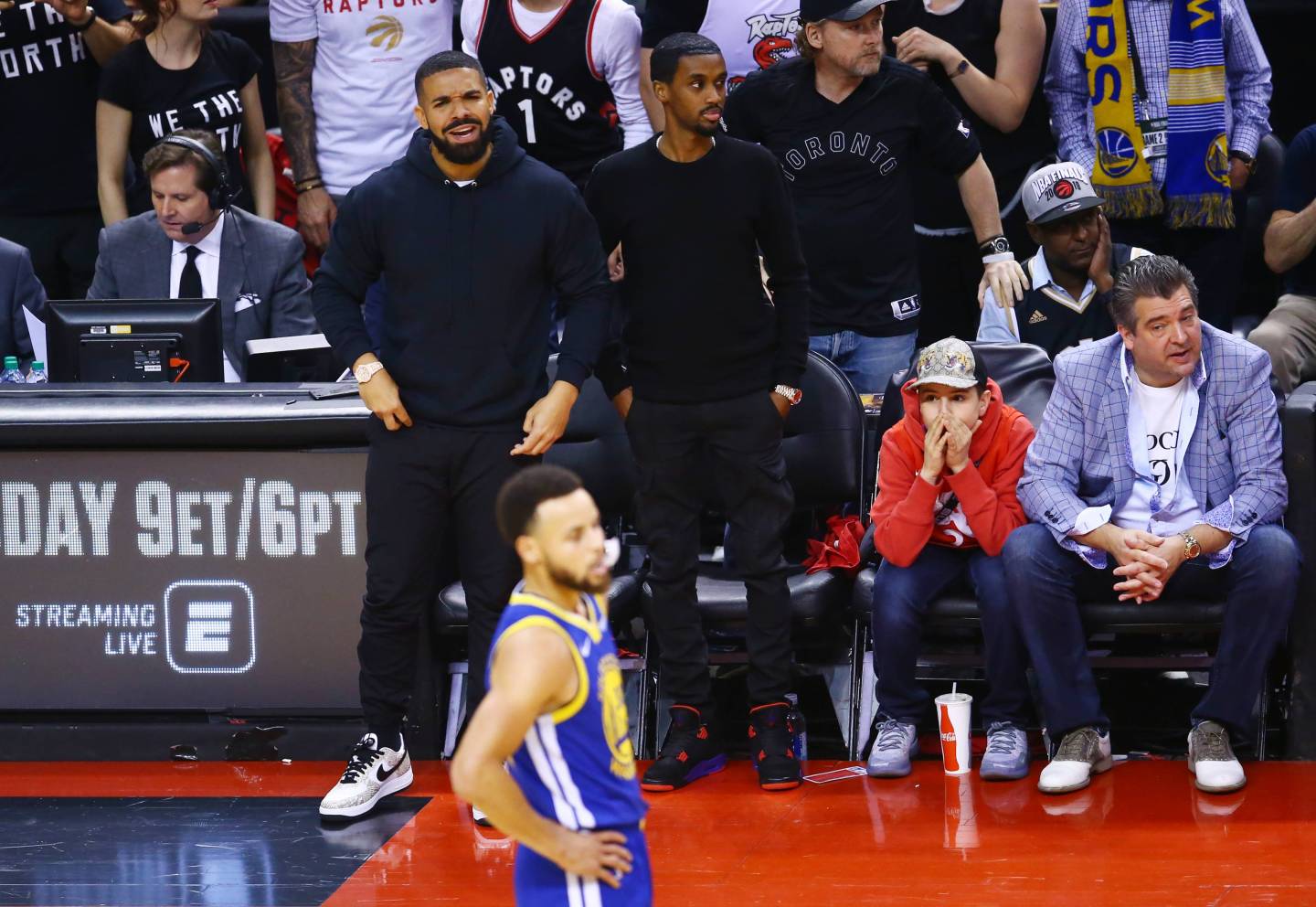 TORONTO, ONTARIO - JUNE 02: Drake reacts in the first half during Game Two of the 2019 NBA Finals between the Golden State Warriors and the Toronto Raptors at Scotiabank Arena on June 02, 2019 in Toronto, Canada. NOTE TO USER: User expressly acknowledges and agrees that, by downloading and or using this photograph, User is consenting to the terms and conditions of the Getty Images License Agreement. (Photo by Vaughn Ridley/Getty Images)
Vaughn Ridley—Getty Images

He taunts, trolls and trash talks his rivals—both on the mic and on the basketball court.

While Drake, officially known as the Raptors Global Ambassador since 2013, will likely appear in the Bay Area to root for his team they take on the Golden State Warriors in Game 3 of the NBA Finals tonight, he apparently hasn’t heeded the warning from the NBA to keep his feelings in check. His high-profile on-court interactions with Warriors’ stars Stephen Curry and Draymond Green are leading some to ask: Is he helping—or hurting—the Toronto Raptors’ brand?

It depends on who you ask.

“I think he’s going a bit overboard,” said Adam Earnheardt, a professor at Youngstown State University in Ohio who specializes in social media and fan engagement. “(Drake) is definitely wrapped up in the moment, and I think he’s trying to embrace it just like every other fan when their team does well. But in his case, you never know if it will have a negative effect.”

Whether he’s known as “Drizzy” or “the God 6,” Drake’s popularity is undeniable. He’s the most streamed artist of all time, according to Spotify, almost single-handedly helping revive the music industry. He has major corporate deals with Nike, his own whiskey line, an Esports team, and a net worth well over 100 million.

And, Drake’s OVO (October’s Very Own) brand includes his Toronto-based record label with his friends that’s distributed through the Warner Music Group. The label also has a popular show on Apple Radio. Additionally, OVO has a partnership with the Raptors that includes the team in March renaming its practice facility as the OVO Training Centre. The OVO and Raptors venture also includes spending millions of dollars refurbishing basketball courts across Toronto and funding Canada Basketball.

“Part of Drake’s appeal is his fire – as an artist, as an entrepreneur, and as a fan,” said Steve Gera, CEO of the Gains Group, a sports innovation consultancy firm that works with the likes of soccer powerhouse FC Barcelona. “The average sports fan sees that and can identify with it because we watch sports because we love competition.”

Drake also has a way with social media, said Ryan Holiday, a Los Angeles-based media critic and author of the book, “Trust Me, I’m Lying: Confessions of a Media Manipulator.” “He’s polarizing, but innocuous in the big scheme of things,” Holiday about Drake. “He’s very aware he’s pushing buttons on purpose. Love him or hate him, you pay attention to him. Social media has an insatiable appetite, and he feeds it.”

That’s part of “The Drake effect,” and doing business with him, Holiday adds.

“Drake has done as much to bring attention to the Raptors as the players do on the court,” Holiday said. “It’s like when Jay-Z rapped ‘I made the Yankee hat more famous than a Yankee can,’ that’s what Drake is doing with the Raptors.”

Before the NBA Finals, the league spoke to Drake and his manager about his on-court behavior. It came after some backlash when the rapper gave Raptors head coach Nick Nurse a shoulder rub mid-game during the Eastern Conference Finals. The coach later said he didn’t even realize he was being touched and that it was Drake. “I think that’s an absolute bright line that we have to draw,” NBA Commissioner Adam Silver told reporters. “So that’s one example, and I would also say that I think the issue for the league is that he has this ambassador-type role with the team. So he is viewed a little differently than any fan sitting there.”

Earnheardt said Drake has “privileged access” that most fans don’t get and with that comes great responsibility. But Drake may also be a secret weapon for the Raptors, he said. “It’s possible that Drake takes some of the pressure off the Raptors by smack talking at opposing players and they can get distracted by yelling back at them,” Earnheardt said. “Every team is looking for the slightest advantage to get a win.”

Both Gera and Earnheardt compare Drake’s fanaticism with fellow NBA superfans, Spike Lee who roots for the New York Knicks, and Jack Nicholson who loves the Los Angeles Lakers. But Drake, onlookers say, is much more dramatic. “Drake is definitely pushing the line, he’s close if not already over it, but the only entity that creates a line, in this case, is the NBA or the club,” Gera said. “His interactions with the players are just out in the open. It’s common at a Lakers’ game to see a player talk and interact with a movie star, but Drake does take it to another level.”

Gera said Drake’s trash talk far exceeds that of Lee, who was demonstrative with the Knicks’ inability to beat Michael Jordan and the Chicago Bulls in the 1990s while also filming classic Nike Air Jordan commercials with the basketball great.

“And that was good for the NBA as the display (was) good for business,” Gera said. “I think the Warriors aren’t too concerned about a diss track (from Drake) because they have their hands full with this Raptors squad.” Warriors shooting guard Klay Thompson told reporters last week he will ignore Drake and even not listen to the artist’s “soft songs.” “If it’s one of his R&B songs, I’m gonna skip it because I’m in kill mode right now, trying to get these four games (to win the championship),” Thompson said.

Interesting, Drake has the numbers of Durant and his Warriors teammate, Stephen Curry tattooed on his left forearm. Curry had said he finds Drake’s actions “entertaining,” especially when the rapper trolled him by showing up at Game 1 of The Finals wearing an autographed Dell Curry Raptors jersey. Curry’s father played with the Raptors from 1999 to 2002.

Curry and Drake had a brief friendly exchange during the game, and Drake clearly picked some lint from a towel out of Curry’s hair Moments later, the rapper was smack talking to Golden State forward Draymond Green who walked near Drake. They had a heated discussion as Drake apparently yelled the word “trash” at Green, who would later say “it’s fun for me.” The two also reportedly went out for dinner the next night as Green wore an OVO brand sweatshirt.

“This is a friendly battle between the Bay Area and Canada,” said Kimmie Tee, a San Francisco radio personality whose station, KBLX-FM, has temporarily dropped Drake’s songs from its playlist in the playful spirit of supporting the hometown Warriors. “All is fair in love and war.”

All of this fervor makes for compelling viewing and heightened curiosity, Gera believes. “At the end of the day, Drake’s actions are representative of that competitive fire that every hardcore fan feels for their team, which is why people are gravitating towards this,” he said.