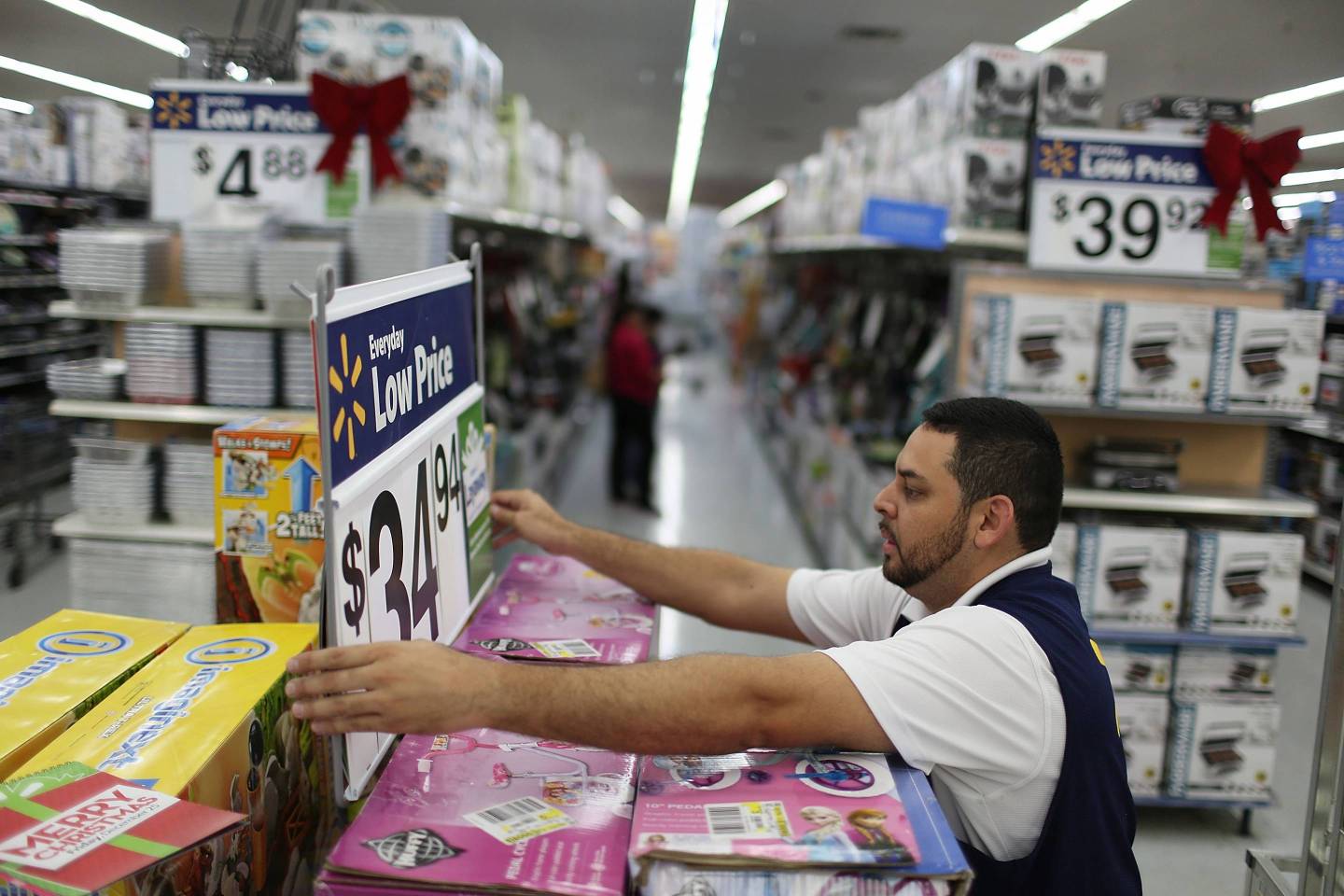 MIAMI, FL - NOVEMBER 24: Jaime Vado fixes a display in the isle at a Walmart store as they prepare for Black Friday shoppers on November 24, 2015 in Miami, Florida. Black Friday, which is the day after Thanksgiving, is known as the first day of the Christmas shopping season and most retailers offer special deals on the day. (Photo by Joe Raedle/Getty Images)
Joe Raedle—Getty Images

The move shows how the world’s largest retailer, which sells billions of dollars of goods made in China annually, is incorporating the reality of tariffs into its day-to-day operations. Walmart emerged relatively unscathed from the first rounds of tariffs on imports from America’s largest trading partner. But that’s changed, with the U.S. bumping levies to 25% on $200 billion of goods, including handbags and furniture, then initiating a separate process to tax another $300 billion, including clothing, shoes and electronics.

The retailer began using the tool, dubbed Cost Change Scenario, a year ago and has been rolling it out across product categories, according to internal memos and emails obtained by Bloomberg.

The online application, whose existence hasn’t previously been reported, replaces Excel-based forms, which vendors had to fill out manually. The new process is quicker and lets vendors choose a reason for the cost hike from a menu, which includes tariffs, labor, transportation, and raw materials.

Tariffs could “wipe out” retail profits

The uncertainty surrounding Chinese tariffs has made their job tougher as Walmart gears up to battle rivals Amazon.com Inc. and Target Corp. during the back-to-school and holiday selling seasons.

Greg Melich, an analyst at Evercore ISI, estimates the latest tranche of 25% tariffs, if instituted, would prompt across-the-board price increases and “wipe out” profit growth among big U.S. retailers.

“I hope that this gets sorted,” McMillon said last week, “but we obviously don’t control that.”

How the tool works

The tool’s name Cost Change Scenario reflects realities of retail supply chains: While suppliers set the cost of particular items, Walmart controls the final price on the shelf. When suppliers raise the cost of a product, retailers have to decide whether to absorb some or all of that increase, taking a hit to profit, or simply pass it along to consumers, which could hurt sales if they choose to shop elsewhere for the product.

Walmart’s previous cost-change forms varied by product category and didn’t let suppliers choose tariffs as the impetus for changes, according to documents obtained by Bloomberg. It’s unclear how often suppliers are currently citing tariffs as a reason for cost hikes, compared with other issues.

The retail giant’s updated cost-changing process is housed inside its Retail Link system, which it developed in the 1990s to provide vendors with up-to-date information on sales and inventory levels as its business rapidly expanded. The system has evolved over the years, and today includes data-mining capabilities that let suppliers predict what items will be in high demand. Around Walmart’s headquarters in Bentonville, Arkansas, self-proclaimed Retail Link Specialists help suppliers interpret the data.

Walmart said last month it will do everything it can to maintain low prices it’s famous for, such as negotiating with suppliers and finding new sources of manufacturing outside of China.

“We’re going to do the best we can to manage through this in a way that our customers don’t feel it, pulling all the levers that we’ve got,” chief executive officer Doug McMillon said in a presentation to analysts last week.

But Walmart has warned higher prices on some items, such as bicycles, are inevitable. “Increased tariffs lead to increased prices,” chief financial officer Brett Biggs said in a May 16 interview.

In turn, higher prices caused by tariff increases reduce consumer’s disposable income, which limits what and how much they can buy.