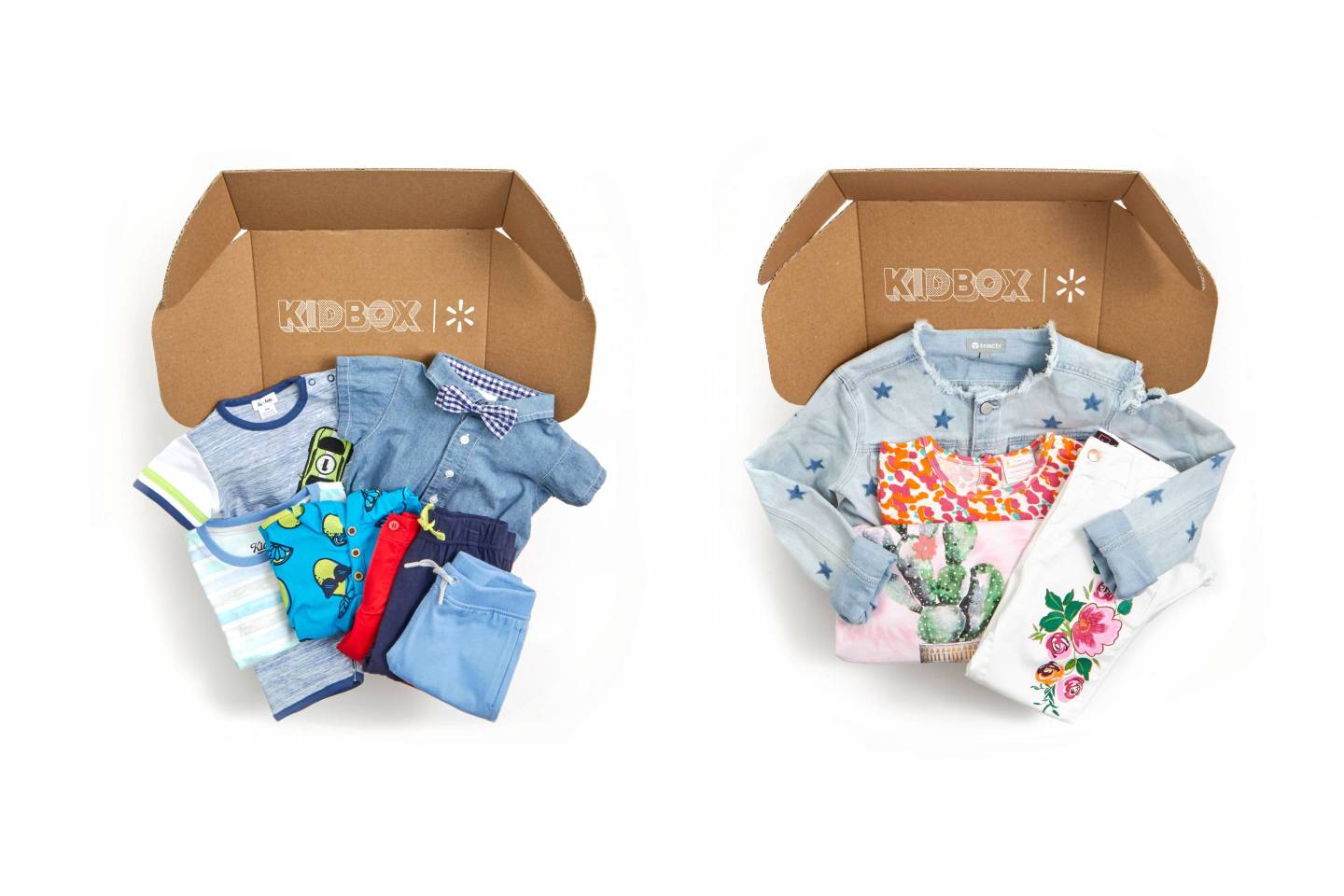 Walmart.com is further burnishing its ambition as an affordable go-to fashion retailer by embracing the e-commerce trend of customizable subscription boxes.

But instead of elbowing into the crowded women’s apparel subscription arena, the discount giant is delivering upmarket kids’ clothes—such as C&C California dresses, BGBG pants, and Puma hoodies—through a partnership with Kidbox, announced earlier this week.

Consumers can receive four to five kids clothing items for $48 a box, up to six times a year. A stylist, without charge, picks the clothes based on results of a child’s Kidbox personality quiz, as well as their favorite color, aesthetic preferences, time of year, location, and size (0 to 14 for girls, and 0 to 16 for boys). Kidbox is bringing a roster of 120 designers to the partnership, some of which overlap with brands Walmart.com already carries, but many of which are new to the retailer’s offerings.

In plotting Walmart.com’s fashion renaissance, “we started with women,” says Incandela, who joined the company in the fall of 2017, bringing high-end fashion credentials such as president of Ralph Lauren Global Business and its consumer insights management, and earlier as EVP at Saks Fifth Avenue for marketing and president of Saks Direct, launching Saks.com.

“Now we are leaning into kids,” she said.

And while Walmart.com’s fashion overhaul is similar to what the company has undertaken at its stores to attract more fashion focused, middle-class shoppers, Inclandela noted, the online “objective is to materially expand our product assortment beyond what we offer in the stores,” which is better known for having value items.

“Because we don’t have real estate constraints online, we can go well beyond the value product into the good, better, best,” she said. “And our customers have told us that they are open to those good, better best price points.”

“Kids make sense,” says Marshal Cohen, The NPD Group’s chief industry adviser for retail, in an email to Fortune. “They always outgrow or out wear their clothes a lot faster than adults.”

Kickbox started in 2015 and its first apparel season was back-to-school 2016. It’s received $28 million in venture capital funding as of April 2018.

“Even in the day of smartphones and Xboxes kids still love to receive things in the mail,” Kidbox CEO Miki Berardelli explains to Fortune. “And millennial consumers”—parents—”are very much an on-demand consumer.”

The market for children’s clothing, like other apparel, is exceedingly competitive, even more so since Gymboree’s January bankruptcy and closing of its 900 stores. That’s left a market gap for big box retailers, e-commerce giants, and niche markets to fill.

“With Amazon pushing to become the leading apparel retailer, Walmart is responding by continuing their drive to acquire the customer segment focused on kids’ apparel,” said Tyler Higgins, retail practice chief of consultancy AArete, in an interview with Fortune.

“With Walmart’s competitive position of low price, they are now able to add brands kids and parents know, along with style advice, to gather greater market share,” Higgins says. “The dynamics are quickly changing as parents continue to trust clothing from retailers such as Target and Walmart, and finding themselves not needing to make special trips to youth-focused retailers for clothing alone.”

Kidbox’s regular subscription costs $98, which is $50 more than at Walmart.com, but it includes more items—seven to eight, instead of four to five from the retailer, and allows customers to try on the items prior to paying.

Berardelli said that Incandela “knows her customers” and the $48 Kidbox price for Walmart.com was the right threshold to test the concept.

However, Incandela said Walmart.com’s Kidbox apparel could eventually have a $98 price range on Walmart-owned Jet.com.

Breaking Into The Box

Although Walmart launched a $5 quarterly Beauty Box in 2014 that delivers makeup and product samples, this is Walmart’s first foray into the highly saturated subscription box apparel model.

And while there is competition in the children’s subscription services, Higgins said the niche remains relatively “untapped.”

There’s also Stitch Fix Kids, which charges a $20 per box styling fee and sends consumers eight to 12 items between $10 and $35 each, which can be partially returned or entirely kept for a 25% total discount. (As a company, Stitch Fix also has faced recent market slumps over worries about its ability to compete with Amazon.)

Although Kidbox allows consumers to trade individual items due to incorrect size or style, they are required to either relinquish the whole box for a refund or keep the entire box—and then choose one out of four charities to donate new clothing to as part of the company’s social mission.

“The most diversified customers I’ve ever seen”

There are similarities between Walmart’s and Kidbox’s customers.

“We were delighted in our first few meetings that we have very similar customer bases from a geographic and socioeconomic perspective,” Berardelli said. “I like to say we are building a brand for the heartbeat in the country. And while we have strong customer bases on the coasts, our strongest base is in middle America.”

Unable to give specifics, Berardelli noted that Kidbox has “the most diversified customers I’ve ever seen” in terms of race, location, and socioeconomic status, ranging from $50,000 per year households to families that fall in the $250k and up bracket. (Prior to joining Kidbox as CEO, she held executive positions at Chico’s FAS, Tory Burch, and Ralph Lauren.)

Kidbox says it has a 1.5 million-person “community of consumers,” which includes customers and members of its email lists and social following.

This partnership has the potential to increase both Walmart.com’s and Kidbox’s reach.

“If we go back to Walmart we have over 100 million unique viewers visit on our site every month,” Incandela said. “One reason why we’re on path to improve is that there’s a huge opportunity to capture more of their share of wallet.”

As is reflected with this new endeavor, Incandela said one way Walmart.com plans to do this is by “playing offense with strategic partnerships.”