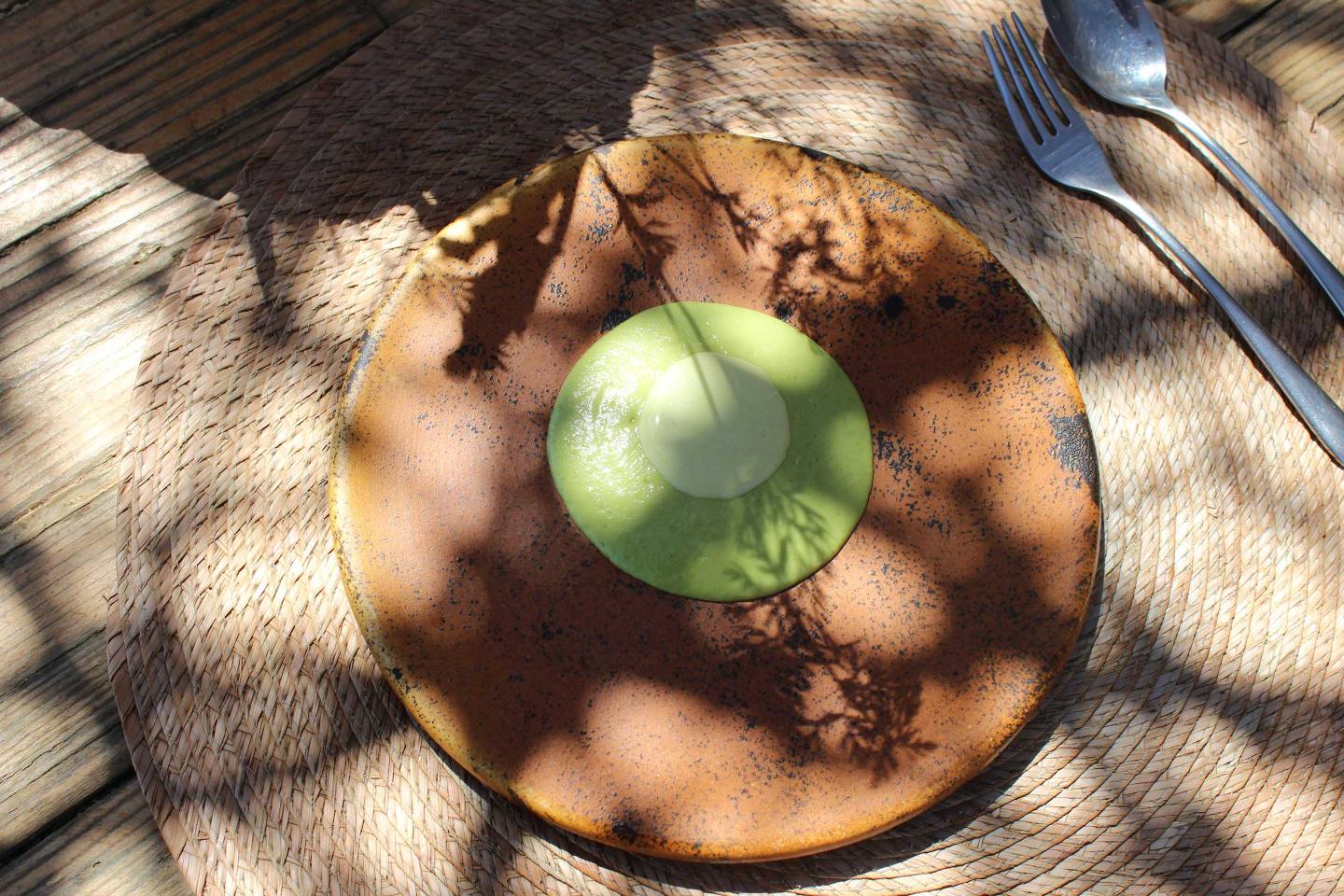 Chef David Castro Hussong of Fauna, the two-year-old restaurant tucked into Bruma, a resort in Baja California’s wine country, bristles when people compare his spot to some of the big names in the industry.

“It’s not Pujol,” he says, of Enrique Olvera’s seminal Mexico City restaurant. “It’s not the French Laundry of the Valle de Guadalupe.”

But the caliber of cooking, if not the style, deserves that kind of praise. Castro, along with his wife, Maribel Aldaco Silva, as pastry chef, has created in Fauna the kind of fine dining that merits the journey along bumpy dirt roads to its hilltop location two hours south of San Diego.

What Fauna is, however, takes more words than those simplified comparisons. It’s grilled lettuce with beans and peanuts, topped with a chicken reduction, that somehow tastes like next-level carne asada straight off the heat. It’s a Mexican restaurant redolent with the flavors of Castro’s coastal childhood in Ensenada, a 45-minute drive down the hill. It’s the hunting lodge warmth of furry throws over the chairs and the wine country elegance of a wall of windows marrying indoors and out. It’s a place where the chef can use his skills, garnered while working at places like New York City’s Eleven Madison Park and staging at Noma in Copenhagen, to showcase the ingredients that swim and grow on the Baja Peninsula. It’s a place where about $100 U.S. will buy you the many-course experimental tasting menu and its pairings—from the on-site winery’s latest rosé to pours from a torso-size bottle of mezcal. It’s a place that lives and breathes the wide-open air of sparsely populated hills but whose roots run deep through the Baja soil.

The first course of crudités—served with a two-toned, creamy avocado dip—seems to embody nearly all of Castro’s influences. The tiny spring vegetables, plucked from nearby and stuck into a grand urn full of ice, as if it were the earth and they were still growing, are the elegant Valle de Guadalupe version of the New Nordic trend where vegetables arrive at the table in edible soil. The dual concentric circles of the accompanying dip call to mind Olvera’s most iconic dish, which combines two ages (and thus colors) of mole, while the flavor is purely of classic Mexican guacamole.

As the courses continue, the references to Mexican dishes grow more obscure for those not intimately familiar with the cuisine: a tetela (normally a stuffed and griddled triangle of corn dough) is made with garbanzos and chipotle and wrapped in a cabbage leaf, and the pork jowl plays at the flavors of salpicón (usually shredded beef). “It’s a restaurant for the Mexican palate,” says Castro, who adds he is surprised that Americans like it as much as they do. “It’s flavors that I, as a Mexican, grew up enjoying.”

But it’s almost impossible not to love Fauna, no matter your culinary fluency in the region: The crispness of the skin on the roast duck ballooned with its own juices, the savory complexity of charred cabbage with cabbage puree, and the novelty of serving bone marrow from half a femur, sliced lengthwise, need little translation.

The dishes reflect Castro’s Baja experience—he grew up helping his grandfather at the family’s ranch in these same hills, cooking and working with the animals. At his house down on the coast, he caught octopus, fluke, and grouper. And while he eventually left—cooking at Blue Hill at Stone Barns in New York, MeroToro in Mexico City, and helping Gabriela Cámara open Cala in San Francisco—it is difficult to imagine him anywhere but here on the peninsula, where he started cooking at age 14 at a cousin’s restaurant, which was only 16 years ago itself.

Aldaco, Fauna’s pastry chef, has the same Blue Hill–MeroToro–Cala pedigree as her husband, plus additional fine-dining experience at the NoMad Hotel in New York City and Quince in San Francisco. It gives you the sense that her wildly complex, artistically executed desserts might even be toned down to match Castro’s menu. Caramelized amaranth underneath a meringue and lemongrass parfait calls to mind alegría, the Mexican candy made from the grain, delivering the same kind of allusion to childhood memories as Castro’s cooking; milk ice cream perched on a honey semifreddo with blue cornflakes is a bowl of cereal in refined form. She has somehow managed to perfectly emulate his style in her desserts.

Fauna seems built for Castro—the open kitchen with geometric tiles framing the copper pots that hang above, the sprawling fields of the winery below. He jokes that they are busy on one night because Fauna is the only place around that’s open on Tuesday evenings, that when it rains they are busy because Fauna is one of the only places with a real roof. But the truth is Castro and Aldaco could be cooking in a damp basement during a Monday morning rainstorm, and the meal would be worth sitting down to. Luckily, there’s no need for that—and soon it will be even easier to taste Aldaco’s work: They’ve started plans for a small bakery at the entrance from the highway to Bruma where she can sell her pastries. “She followed me on my dream,” Castro says. “Now I follow her.”

—Toronto is home to a thriving Syrian food scene