How Boutique Mezcal Makers Are Taking on Tequila 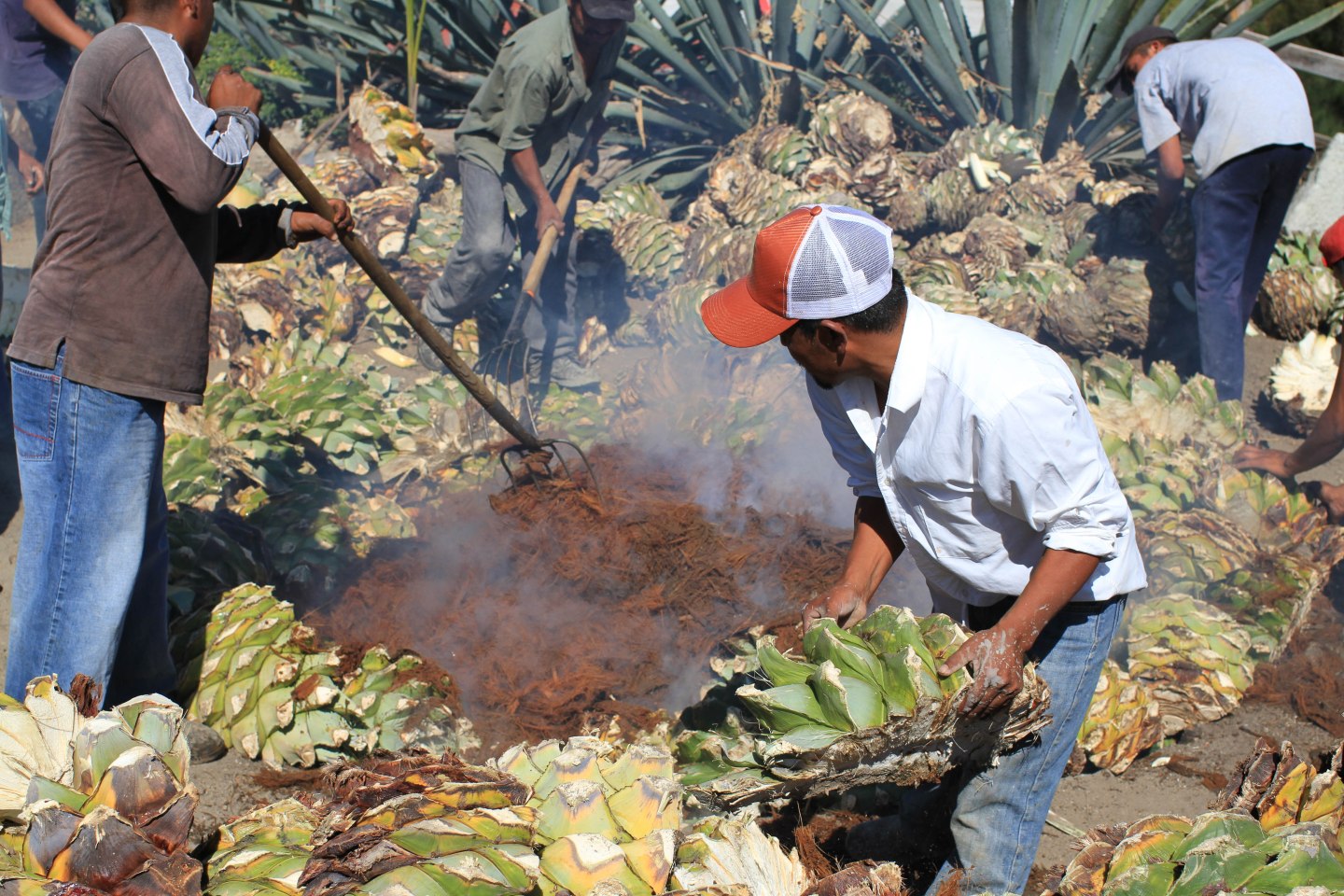 Cooking down agave for mezcal in Oaxaca, Mexico.
Photo by Nathaniel Parish Flannery

In the remote hills outside the provincial capital of Oaxaca, in southwestern Mexico, Pedro Hernandez, a 37-year-old master mezcal maker, stands in the middle of his backyard distillery and inspects a chest-high pile of dirt girded by a simple fence made from heavy tree trunks.

“It’s an underground conical oven,” he explains, holding his hand out to feel the dull heat emanating from the mound.

The rudimentary oven, four meters wide and just under two meters deep, is the heart of Hernandez’s business. It’s also what differentiates his award-winning mezcal from the industrial tequila produced a few hundred miles up the Pacific coast in Jalisco.

Every week the mezcal making process begins when Hernandez lights a raging fire in the center of the pit. “We load in tree trunks and rocks from the river. When the rocks get red hot we load in the piñas,” he says, using the Spanish word for “pineapple” to describe the trimmed heart of the raw agave, a spiky succulent. Once the oven is filled with agave hearts, the piñas are covered with an insulating cap of dirt.

Over a 72-hour slow-roasting process, the tough yucca-like fibers of the agave plant melt into golden, gooey chunks. It’s a time-consuming process that infuses the finished mezcal with an earthy, smoky ensemble of flavors that cannot be replicated on an industrial scale. Industrial mezcal and tequila companies cook enormous batches of agave in steam ovens, and rely on barrel aging to add the smoky edge.

Hernandez picks up a caramel colored chunk of roasted agave and hacks it in half with his machete. Plunging his blade into the heart’s center, he watches a stream of sweet brown nectar bleed out. While tequila is only made from agave azul (blue agave), mezcal can be produced using a wide variety of wild and domestic agaves, a fact that further distinguishes mezcal from its better-known cousin.

“Each agave has its own flavor,” Hernandez says as he pops a piece of the roasted piña into his mouth. “It [tastes] like candied squash,”

While tequila companies use giant juicers called diffusers to extract the juice from the agave, Hernandez’s workers still use a horse drawn stone called a tahona to slowly mill the roasted agave.

After milling the agave, his workers load the dry fronds and pulpy paste into wooden barrels. There, along with water from a nearby spring, the agave ferments in a thick soup. The final step is distillation. While industrial tequila makers employ massive distilleries that resemble oil refineries, Pedro uses four small copper stills heated by wood-fire ovens. Every morning his workers dump in wheelbarrows full of pumpkin orange agave chunks and coffee colored liquid from the fermentation tanks. As the elixir boils and passes through the copper tubes, it condenses and trickles out as mezcal.

“There’s a lot of demand right now,” Hernandez says as he watches the crystalline mezcal weep into a plastic bucket. “[Sales] have doubled in the last three years.”

Mezcal is one of few economic success stories in Mexico’s poor and largely pre-industrial south. Analysts and academics often describe Mexico as a country divided between industrial, globalized, and highly developed urban areas and disconnected, isolated, and underdeveloped rural ones. As central and northern Mexico have enjoyed an influx of foreign capital and an increase in industrial production, the hills in Oaxaca have endured in isolation.

“Oaxaca is one of the poorest states in the country. A lot of towns are indigenous [enclaves] that live in isolated areas in the mountains,” says Salvador Medina, a Mexico-City based economist. But while Oaxaca is recognized as one of Mexico’s poorest states, it is also celebrated as one of the country’s most important destinations for cuisine and culture. “It’s a really rich state in terms of culture—in terms of history, indigenous languages, and all the food they have, including mezcal,” Medina says.

Sitting at an outdoor table at a restaurant in the newly renovated Plaza Cibeles on the border between Colonia Roma and La Condesa, two of Mexico City’s trendiest neighborhoods, mezcal seller Alejandro Champion explains that growth in the mezcal market is being driven by the premium segment. “Four years ago there were 17 brands in that price segment. Now there are 150,” he says.

Mezcal exports nearly doubled from 647,989 liters in 2011 to almost 1.2 million liters in 2014. It’s a market boom that Champion compares to the dot.com bubble of the late 1990s. “The small brands are making a lot of noise. There’s a big boom in terms of the price of the liquid [we sell],” says Champion, who is the co-owner of Mezcal Union, one of the brands that markets and sells the mezcal Hernandez makes.

Mezcal has a long way to go to catch up with industrial tequila exports, however. Thanks to U.S. marketing efforts by industrial brands, Mexico’s tequila exports grew from 65 million liters in 1995 to 172.5 million liters in 2014. The mezcal market is still tiny by comparison, and far more artisanal. At its forefront are small-time craft distillers like Hernandez who produce a few hundred bottles a day.

Rather than being blasted back as a shot, mezcal is meant to be savored one sip at a time, and consumers are acclimating their palettes. As the market has matured, Champion has watched consumers push towards ultra-premium small batch mezcals with higher alcohol contents and stronger and more complex flavor profiles. While Mezcal Union started with a 38% alcohol joven (young) line meant to appeal to people who are first discovering the smoky complexity of the spirit, Champion has since launched a new 45% alcohol line called El Viejo that is a mix of commonly used espadin agave and the rarer tobala variety, which is mostly harvested in the wild.

Picking up a bottle of El Viejo, Champion pours out a small glass and lets a few drops fall on the back of his hand. Rubbing his hands together he explains that as small-batch mezcal evaporates, “what you smell is the process; the firewood, the rock, the earth, and fire.” As with wine, mezcal’s complex chord of herbal, grassy and fruity flavors varies depending on where the agave plants are raised.

Mezcal compares to tequila in the same way that single malt scotch compares to mass-market whisky. Champion hopes that in the long run mezcal can win a similar market share as single malt whisky, an achievement he believes would be a major boon for producers in Oaxaca.

“You feel an explosion of flavor,” he says as he lifts a glass and inhales its aroma. “You really feel the tobala.”