Review: Meroma is the best restaurant in Mexico City you haven’t heard of yet 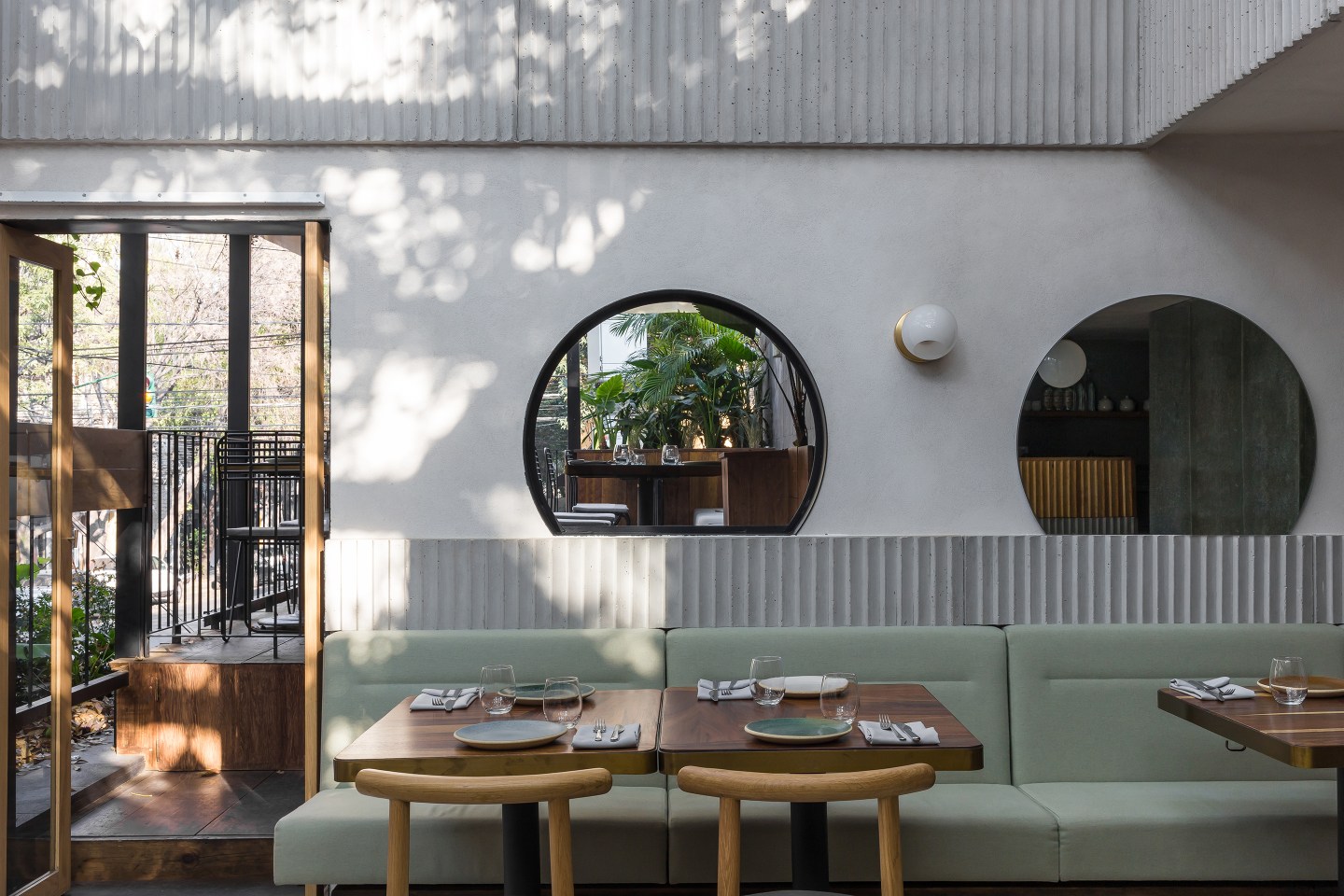 The pivotal moment at Meroma came six months in, triggered by a couple from the Netherlands. Shortly after they arrived at the restaurant in the Mexico City’s gentrifying Roma Norte neighborhood, a waiter hurried into the kitchen to grab Rodney Cusic, the co-chef, co-owner, and this night, translator. The Dutch couple spoke no Spanish, the restaurant had no English menus, and Cusic thought to himself, “Holy shit.”

Cusic and his partner and wife Mercedes Bernal opened Meroma in October 2017 as a neighborhood spot, telling Fortune, “I say this well knowing where we are [ed. note: “the Williamsburg of Mexico City,” Vogue groaned last March], but I never felt we were going to be popular in an international sense.” The Dutch couple was the harbinger of a new audience. Cusic and Bernal had English menus printed.

The menus could be in Dothraki, to be perfectly honest. You could randomly point to any line and be served something supremely delicious, like an escabeche of tender mahogany clams plucked off the coast of Ensenada, julienned, marinated in shallot vinaigrette, and spooned over a raft of grainy house-baked sourdough. The snack is a Meroma microcosm: From the seafood to the wheat, all the ingredients are Mexican, but the techniques range farther. There’s Spain in the pickled shellfish, modeled on a recipe from Bernal’s grandmother, who immigrated to Mexico City from Valencia during the Spanish Civil War. There’s America in the sourdough, a passion for which Cusic, who grew up in Indiana, inherited from his mom, an amateur baker who put herself through school with a cake-making side hustle.

You could describe Cusic and Bernal’s history the same way. They met in New York at the French Culinary Institute and bounced around cooking in Manhattan (Del Posto, Café Boulud), London (L’Atelier Joel Robuchon), Rome, and Jackson Hole, Wyoming. After they got married in 2013 and decided to open a place of their own, they chose Mexico City. “We thought that we could build something very exciting here with my family,” Mercedes says. The “Me” in Meroma is for Mercedes; the “ro” is for Rodney; and the “ma,” for madre, or mother in Spanish. The restaurant’s third partner is Gina Basar, a United Nations accountant and Bernal’s mother.

After looking at spaces for a year, Bernal found a defunct pizzeria housed in the garage, laundry room, and servants’ quarters of a circa-1950s Modernist mansion on Calle Colima. Cusic hated it, Bernal persisted, and with the help of architects from Oficina de Práctica Arquitectónica, the couple now owns one the most compellingly designed restaurants anywhere.

On the approach, the bi-level, foliage-blanketed building resembles a sexy zoo enclosure, with a boundary between indoor and outdoor that’s pleasingly nebulous. The concrete terrazzo bar runs nearly flush with the open-air entrance, creating an impromptu sidewalk cocktail party where drinkers sip on beverage director Ashanty Dawkins’ lovely elixirs. A narrow staircase shoots up from the intimate first-floor lounge to a coral-and-sea foam green dining room. There’s a wall resembling a giant, sideways box grater and a glass ceiling canopied in ash trees, the same lush branches of which embrace an attached 16-seat terrace. Sitting out there is like being behind a waterfall of greenery.

At Meroma, everywhere you look are plants, even down at your plate, where each herb, petal, and leaf leaping off the colorful Guadalajara ceramics feels like a well-considered addition. Celery leaves and cilantro offer cooling, bitter, piney touches to a fantastic young chicken sheathed in tan, crispy skin. Peppery nasturtiums and hoja santa, a plant whose leaves taste like rainforest sarsaparilla, act like spices on a gold and violet beet salad. Sweet purple basil balances tart Yucatan passion fruit in a scallop and grilled shiitake tiradito.

It might not seem like a big deal that the tuna crudo with rowdy lemon vinaigrette and pecan butter comes clad like an emerald piñata in crêpe papery fried parsley leaves, but if you took the herbs away, it wouldn’t taste the same.

The orecchietti wouldn’t taste the same, either, without the chopped braised broccoli hiding among the semolina pasta, fresh cheese, and crumbles of racy North African-style merguez sausage. This broccoli is so super-charged with flavor, I was psyched when its broccolini cousin showed up later in the meal, draped over a block of perfectly cooked mahi-mahi.

“If you told somebody you had really good broccoli in Mexico, they’d probably think that didn’t sound very Mexican,” Rodney says. “But it grows really well here!” And they’ve got the country’s eminent broccoli farmer, Ijiel Goldswieg, in the small grower network they built over the course of a year, because, Mercedes says, “Here it’s not like in L.A. or other [U.S.] cities, where the farmers just come to the market and you can meet them.” They’re sharing the connections with other like-minded chefs in their neighborhood, cooks who “have worked in some of the more important high-end restaurants like Pujol or Quintonil and have gone to Europe for a little bit, or to the U.S., kind of like us, and come back here to open something.”

Another farmer, Bonfilio Dominguez, tends a herd of 25 dairy cows in Zacatlán de las Manzanas, Puebla, and his craftsmanship touches so many parts of the meal. The butter paired with Cusic’s sourdough is the introduction, a smoky maroon swoosh flavored with a quintet of crushed dried chiles. That’s his ricotta mingling with mushrooms inside the al dente agnoloitti, and his harvest of wild oranges illuminating the silky mousse of Cuernavaca foie gras speckled with Veracruz cacao and crushed macadamias.

One of Dominguez’s retired cows supplied the meat for the steak tartare, as well as the tallow that’s brushed on the toast that accompanies it—a profound expression of beef when eaten together.

The only thing I didn’t love at Meroma? A braised block of chuck roll from the same animal, a last-minute substitution for lamb in one entrée that arrived unevenly cooked and dried out.

Just under the radar

Three of Dominguez’s quesos, including a fudgy Camembert-style laced with black truffle, grace a cheese plate with strawberry preserves and chopped pecans drenched in honey. They bridge the savory side of the meal with desserts, which show zero drop-off in creativity or precision. There’s a crunchy and creamy napoleon of whipped yogurt, almond praline, caramelized purple plantains, and chips of fried dough, as well as a chamomile-dusted tart filled with thick, tangy cajeta, the goat’s milk version of dulce de leche. Topped with fennel fronds and refreshing mandarin sorbet, the supple panna cotta tastes like toast because the milk has been steeped with buckwheat and Cusic’s leftover bread. Even something as standard sounding as chocolate pot de crème makes your eyes roll to the back of your head thanks to a ripple of passion fruit caramel, like sweet-and sour lightning raking through the darkness.

You know those restaurants you just feel good in? Meroma is one of them. Open a year and half now, people have caught on, and the clientele at dinner is evenly split between locals and visitors.

But the restaurant is still under-the-radar compared to vaunted CDMX dining destinations like Pujol, Quintonil, and Contramar, the three most likely to show up in the Instagram feeds of your friends traveling there. While those restaurants are wonderful, I’d argue if you’re going to Mexico City it’s more important you eat at Meroma. Cusic and Bernal have created a clear expression of what a modern Mexican restaurant looks like right now—inclusive, thoughtful, and fun, rooted in one of the deepest culinary traditions in the world, but still eager to see the rest of it.