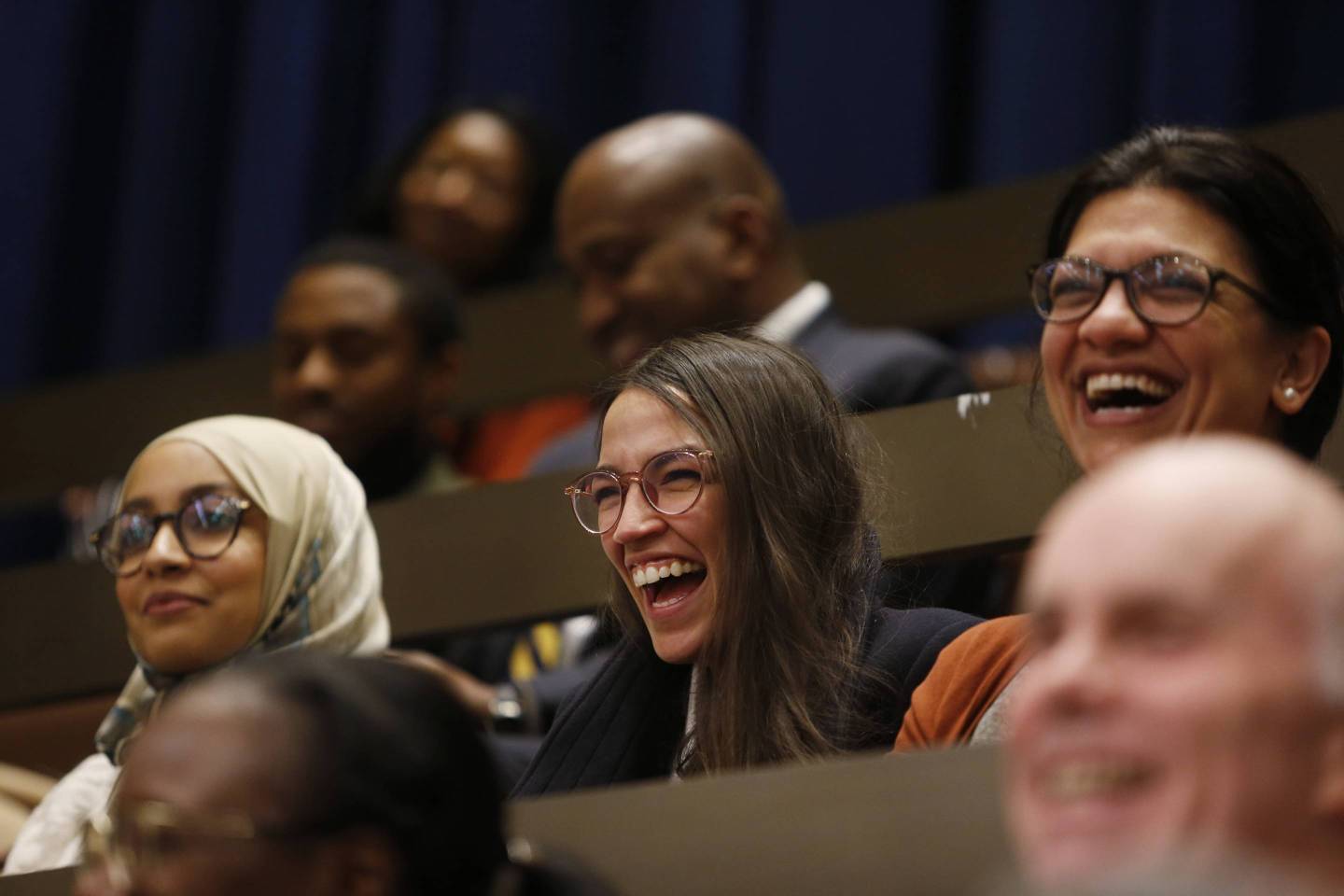 BOSTON, MA - DECEMBER 5: Fellow congresswomen-elect Alexandria Ocasio-Cortez, center, and Rashida Tlaib, right, laugh as City Councilors referenced them in their farewell speech to Ayanna Pressley during Pressley's last meeting with most members of the Boston City Council, where she has served nearly a decade, at Boston City Hall on Dec. 5, 2018. (Photo by Jessica Rinaldi/The Boston Globe via Getty Images)
Jessica Rinaldi—The Boston Globe via Getty Images

The Trump presidency may be the best thing that’s ever happened to the Democratic Socialists of America (DSA). The DSA reports that it acquired 13,000 new members, most between the ages of 18 to 35, between November 2016 and July 2017—an increase of 153%.

The DSA’s growing membership reflects a deeper current, well-noted in recent polling, of capitalism skepticism among Democrats and people under 30. The DSA now has two sitting members in Congress in Alexandria Ocasio-Cortez and Rashida Tlaib, and Sen. Bernie Sanders, a democratic socialist (though not a DSA member), is a front-runner for the Democratic nomination for president. This doesn’t exactly add up to a new democratic socialist majority, but it is indicative of a remarkable development since the 2016 elections: the return of a powerful American leftist movement, last seen in the early 20th century.

It’s safe to say that big business isn’t on board. JPMorgan Chase CEO Jamie Dimon warned in last year’s annual letter to shareholders, “Socialism inevitably produces stagnation, corruption, and often worse …” Earlier this month, Warren Buffett identified himself as “a card-carrying capitalist” in response to a question about his own politics in the current political environment. The website Votesmart.org documents that Bernie Sanders and Rashida Tlaib have very low levels of support from major business associations including the U.S. Chamber of Commerce and the National Association of Manufacturers.

Indeed, the DSA’s agenda, on its face, is not business-friendly. Its advocacy of democratizing private business (granting workers greater control), moving the health and financial sectors toward public control, and raising taxes on the wealthy do not suggest an inclination to see existing business leadership as a potential ally—or vice versa. Democratic socialist candidates’ reliance on small-dollar donations is an explicit strategy to avoid dependence on very wealthy donors.

Yet a closer inspection of historical and contemporary trends reveals that working relationships between leftists in government and businesses aren’t impossible. Any government, democratic socialist or otherwise, needs the economy to thrive if it hopes to stay in power—and, if anything, greater public control of important economic sectors requires more collaboration with business leadership, not less. This becomes even more true if the economic situation goes south. Think of how closely government agencies worked with bank executives as the financial crisis unfolded and you’ll get the idea.

Meanwhile, there are glimmers of recognition in the corporate world—for instance, by Ray Dalio of the hedge fund Bridgewater Associates—that the income and opportunity gaps created by extreme capitalism pose “existential threats” to the U.S. There may be more room here for business-friendliness to democratic socialist politics than CEOs’ public declarations of fidelity to capitalism suggests. Even as Dimon issued warnings of socialism’s deleterious effects in his shareholders’ letter, for instance, he also made a strong distinction between “traditional socialism” and social democracy, which “successfully combine market economies with strong social safety nets.”

Historically speaking, the combination of purportedly anti-business forces in government, economic worries, and concern about political unrest has pushed business leadership and politicians—of whatever political stripe—into closer working relationships. Consider, for instance, the establishment of the Committee for Economic Development (CED), which originated in the Commerce Department in 1942. Amid worries of a post-World War II recession, the CED became a collaborative research initiative of prominent business leaders, economists, and spending-friendly New Dealers meant to promote free enterprise and full employment, paying particular attention to the needs of small business.

From the perspective of officials in then-president FDR’s government, more intervention in the economy necessitated collaboration and information-sharing with business leadership, not to mention allies capable of bringing businesses as a whole on board; for business leadership, the prospect of being able to work from within an otherwise interventionist government to preserve free enterprise made sense. The CED helped to create today’s Council of Economic Advisers (CEA), the Marshall Plan, and an Eisenhower-era tax on excess profits to support wartime expenditures. It’s hard to say how likely an initiative like the CED might be if a democratic socialist should win the White House—but it’s not impossible.

Another possibility is that socialist politicians will find allies in certain corners of the worlds of business and finance—which are internally diverse and differentially affected by economic trends and policy decisions. An important consideration here is the interests of large versus small businesses. Mergers and acquisitions, which rose sharply since the 2008 financial crisis and spiked in 2018, fuel monopoly and the concentration of revenue in big firms’ hands, especially in the retail, IT, financial, and transport sectors.

As the financial crisis and Great Recession showed, the risky practices of giant financial firms endanger small commercial banks and credit unions—which, in turn, threatens the credit lines of the small businesses that depend on them. Given that around 90% of U.S. firms have fewer than 99 employees, this is hugely important for the economy as a whole.

Democratic socialists are focused on these kinds of concerns. The Sanders campaign, for instance, emphasizes its support for entrepreneurship and low-rate small business lending.

The biggest question hovering over the prospect for collaboration between democratic socialists and business leadership concerns socialist politicians’ strategy for handling the finance and tech worlds. A great deal of American enterprise—as well mention politics and government—depends on these two sectors. Though their leaders often profess progressive inclinations, it is difficult to conceive of a world in which they are amenable to enhancing worker or public control of their business operations. (Unionization rates in tech are abysmally low—around 3.7% of those in “computer and mathematical occupations,” according to the Bureau of Labor Statistics, lower than the 6.4% overall private sector rate.) After all, a large part of their success owes to the capitalist, entrepreneurship-driven economy from which they’ve emerged.

If such an alliance were to form, democratic socialists in government would be even more empowered to take on the systemic concerns they are so devoted to solving. But for now, they’re likely to find more success working with small businesses and sympathetic companies—and working up from there.

Stephanie L. Mudge is an associate professor of sociology at the University of California, Davis.

—Joe Biden is wrong. Businesses will—and want to—pay for Medicare for All

—Why we need a public health insurance option