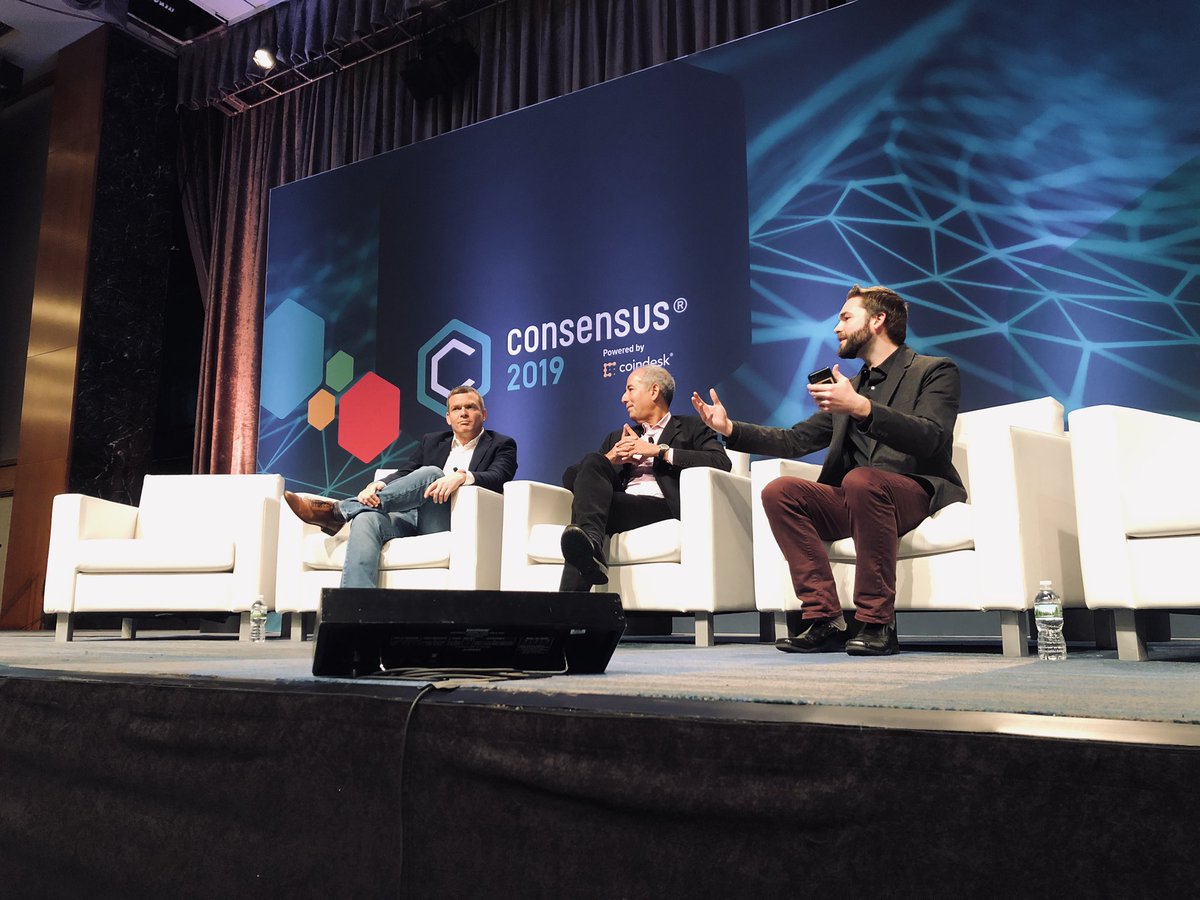 New York City’s just-concluded “blockchain week” was palpably more subdued than it has been in years past. (Or maybe I was just not invited back to the parties after my 2018 travelogue.)

In any case, I took a brief break from the madness of the Fortune 500 issue close to drop by the Consensus conference, the week’s marquee event, where I moderated a security-themed panel on Monday. My panelists were Tom Glocer, the lead board director of Morgan Stanley and former chief executive of Thomson Reuters, and Nadav Zafrir, the CEO of startup foundry Team8 and former head of the Israeli Defense Forces’ Cyber Command and Unit 8200, Israel’s equivalent of the U.S.’s National Security Agency. (For a recording, see video No. 15 here.)

Below are some soundbites from our conversation. I asked Glocer about a post he had published in the fall on his excellent personal blog in which he pondered who, or what, should own people’s data. His response imagined a world in which people might own their own information and where they would, using individual digital wallets, license the rights to corporations.

Rather than the current situation where we just weren’t paying attention and Google and Facebook, etc., built up huge caches of our private information, you would have the choice to sell Google your search history in return for a micropayment. Or you would sell Apple your photos in return for a micropayment, etc. I think it’s an interesting way of turning the current model on its head. But we’re not going to get there without some very significant government intervention along the lines of the debate that’s been raging about Facebook. Tech alone won’t achieve this jiu-jitsu move.

Since he brought it up, I asked Glocer for his thoughts on breaking up Facebook.

Just breaking up Instagram, Facebook, and WhatsApp won’t be enough. Facebook has over 2.5 billion folks. If you really wanted to go after them, I think you would have to go deeper and essentially declare a date by which they’d have to erase all of the data they’ve achieved to date and start fresh with what I’d call an informed consent and maybe, yes, micropayments. There’s no intrinsic reason why it’s awful that [Facebook] owns Instagram and WhatsApp…. If Mark [Zuckerberg] came out and just declared that on June 30th of next year we’re going to wipe out our histories—here’s your chance to download your own, in case you want to keep it, and here are the new rules of the road that you get to explicitly opt into—I would leave all those companies in his world.

The audience tended to agree. When I asked them whether Facebook should get the Sherman Anti-Trust treatment, only about a third of the crowd raised their hands.

Facebook, through the malicious hijacking of its targeted marketing machinery, has greatly contributed to an erosion of faith in traditional institutions. Nadav Zafrir summed up the predicament well. When I asked him what is the most pressing, most frightening threat the world faces, he replied without hesitation.

In one word: Trust. We are now in a world where it’s very hard for us to trust the simple things that, as my generation grew up, we were accustomed to trusting—our democracies. Our voting systems…. The irony is that the blockchain has a great potential to offer that [trust], yet it has become synonymous almost with the opposite…. At the end of the day attackers are human. They’re ROI [return on investment]-driven. They’re not super-ninjas or super-humans. They have their limitations. They have their vulnerabilities…. It’s an asymmetric battle when the attackers only need to find one single point of failure in the whole system and it’s game over. Hence, if we take that single point of failure and distribute it in a way where attackers need to hack everybody simultaneously and get everybody’s consensus, we’re flipping the asymmetry and taking control of the situation.

Of course, retaking control of the situation is no simple task, even with the advent of blockchain technology. Zuckerberg is, for his part, exploring how he might reestablish the foundations of his media empire on the footing of blockchains, cryptography, and private messaging. With all the consumer backlash and heat from regulators, it will no doubt take expert jiu-jitsu to pull off.

May the groundwork commence.