The Indian Elections Had an Unlikely Influence—Immigrants in the U.S. 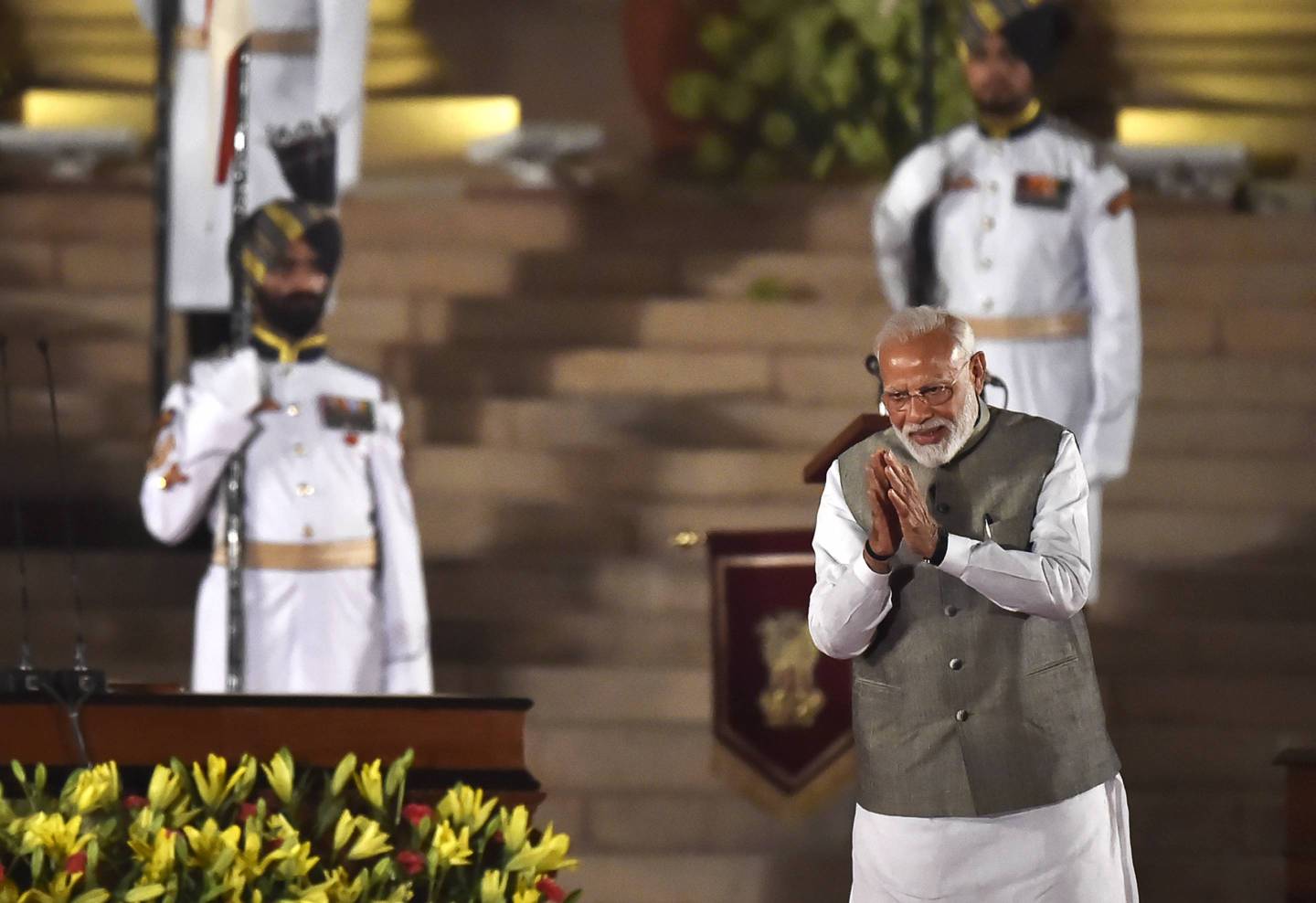 NEW DELHI, INDIA - MAY 30: Prime Minister Narendra Modi gestures after taking oath as the Prime Minister of India for second term, at the forecourt of Rashtrapati Bhavan, on May 30, 2019 in New Delhi, India. Narendra Modi took over as the Prime Minister of India for a second term at a glittering ceremony at the forecourt of Rashtraparti Bhavan. There are 24 cabinet ministers and as many MoS' while nine other were given MoS with independent charge rank. (Photo by Ajay Aggarwal/Hindustan Times via Getty Images)
Ajay Aggarwal—Hindustan Times via Getty Images

Cheers rang out in ballrooms across the country as Narendra Modi and his party were declared as the winners of the majority of seats in the 2019 Indian elections last week. Supporters of his main rival, the Congress Party’s Rahul Gandhi or other candidates up for Prime Minister, took to public spaces in emotional shows of disappointment with world’s largest democracy as well. These scenes did not take place in India though, but all over the U.S.

For months leading up to the seven rounds of voting held over several weeks, Indians across America belonging to the international arm of the two main political parties in India: Modi’s Hindu nationalist Bharatiya Janata Party (BJP) and his rival Rahul Gandhi’s Congress Party were hosting events akin to political rallies from the Bay Area to Edison, N.J., and even the Colorado Rockies while riding atop snowmobiles. There were canvassing strategy sessions over tea and snacks and making phone calls to friends and family back in their motherland on behalf of candidates.

These Non-Resident Indians (NRIs) are often green card holders, if not full-fledged U.S. citizens, but the interest in working on campaigns continents away in their motherland appears to be driven most by a sense of patriotism and duty to the country of their birth and early years. But there are economic considerations as well. It is an immigrant phenomenon driven by connections maintained through frequent flights, e-mail and Whatsapp, global entertainment and business ties, and social media.

Since his visit in 2014, which was greeted by throngs of NRIs in Madison Square Garden and watching on screens in Times Square, he has been somewhat of a sensation in the American diaspora. American politicians, from the likes of Senators Cory Booker and Tulsi Gabbard to Bill and Hillary Clinton, also seemed enamored with the celebrity status Modi enjoyed in the U.S. the past few years.

That is in large part due to the majority of the American diaspora being vocal about their support for him and the BJP. They often call themselves chowkidars, the Hindi word for watchmen, of India’s future and Krishna Reddy Anugula of New Jersey is one of them.

Anugula is the president of the Overseas Friends of the BJP (OFBJP) and following the party’s resounding victory in all but a few Indian states, he said in a statement that Modi will “take India to the next level with the proposed investments in infrastructure, health care, and farming sectors.”

He told Fortune he and fellow supporters made weekly phone calls to family, friends, acquaintances, and business associates back in India and even held several chai pe charcha, the Hindi phrase for conversations over tea, to educate NRIs and strategize about how to best reach voters in India. The purpose of all this: to talk about the benefits of voting for the BJP, and by extension Modi for those living outside of the Prime Minister’s home state of Gujarat, was for a “stable government” for the next five years.

The idea, according to Anugula, is to have an India that is “friendly for…market and businesses at the same time, [while] uplifting poor people” in a way he felt had not happened under the previous party’s rule. He noted that businesses are individuals are more likely to invest in India’s development and its companies if there is some familiarity with the prime minister and his policies.

“What we have seen in the last five years [under Modi] is a big shift in terms of the way we think, the way we do things, and how we can change the country,” Anugula said with the enthusiasm of any door-to-door canvasser you may encounter during an election in the U.S., rattling off several of Modi’s “achievements,” from opening 240 million bank accounts for lower-income Indians who receive government aid to improved sanitation access.

The calls the OFBJP made were usually greeted with enthusiasm, even from those they do not know well.

“They are excited to receive a call from the U.S.,” Anugula noted. The conversations often go like the one he had with Fortune, touting figures on improved access to sanitation and the construction of a national highway system “like Eisenhower did” in the U.S. He explained they rarely get asked why they are campaigning from so far away, an understanding of the ties to India seeming to be appreciated even if not fully understood.

For Anugula and friends, though, one of the more tangible advantages to keeping Modi in office seems to be the way NRIs are treated around the world. He cited evacuations of Indian citizens during times of conflict in Yemen, Iraq, and Syria, which “may have previously been done” but said Foreign Minister Sushma Swaraj and the Indian consulates abroad had taken to being “more proactive…and community friendly” in addressing the diaspora’s issues with passports, visas, property ownership, investments, voting by proxy for NRIs, and even potential dual U.S. citizenship since Modi has come into power.

However, critics have long tied Modi’s rise in popularity to the rise of Hindu nationalism, or Hindutva, in India where 20% of the growing population identify as Muslim, Sikh, Buddhist, Christian, Jain, or other religions.

“While many people may not have any emotional connect with the idea of Hindutva, a majority certainly has emotional investment in the idea of nation,” wrote Suhas Palshikar in an academic journal in 2018. And as Anugula noted, OFBJP canvassers usually do not get asked about Islamophobia on their phone calls but he also said he does not think of it is as a “phobia” in the U.S. either.

It is a matter of “perception,” he said. In the U.S., for instance, Islamophobia has been made into an issue because of “one leader” and his advisers, but it is not reflective of a pervasive problem in American society as a whole. In India, Anugula said, riots “between Hindus and Muslims” were far more frequent in the 1990s but “fear mongering” among politicians opposed to Modi was done in order to drum up votes. Anugula contends India is a country of “everyone gets the same thing” equality.

India, though, is nothing if not diverse and complicated, and that is reflected in the immigrants who have to the U.S. Representing every one of the countries myriad languages, dialects, religions, and cultures, there are immigrants who have varied political stances as well.

Though the majority of NRIs appear to support the BJP, there are plenty who were campaigning for the Congress Party’s center-left position, seen as more progressive and opposing Hindutva. Raj Boda, an IT professional who lives in Minnesota, told Fortune that it was Congress party rule which “built the country from scratch” after independence in 1947.

Roy Manthena, part of the leadership of the Indian Overseas Congress (IOC) and specifically a convener for the south Indian state of Telangana, told Fortune that for he and his colleagues it is not just a love of his birthplace but also a way “to give back” to India after spending half his life in the U.S.

Manthena, an Illinois resident, said choosing to support Congress was not a difficult one because he admires the political process in the U.S. and believes that can help improve the lives of all Indians. Congress “is the party which is secular, democratic, inclusive, diverse…this is the party which built the rivers, roads, and bridges of India,” he said.

Diversity and inclusion are particularly important platform issues for Telangana—the southern Indian state’s capital Hyderabad has long been home to many Muslims.

Manthena spoke of Gandhi, the grandson of former Prime Minister Indira Gandhi, as someone “kind and compassionate” who is focused on development, farmers, employment, and women. According to the Center for Monitoring Indian Economy, the country lost as many as 11 million jobs in 2018 alone, the overwhelming majority of which were in rural areas. Women experienced a loss of 9.9 million of the jobs.

Dr. Mohammed Jameel, a physician and Maryland resident and IOC co-convener, told Fortune: “I believe in the Constitution of India…which has solemnly resolved to be sovereign, socialist, secular, democratic republic. So, the word secular is under threat” as the BJP comes into another five years of power.

Jameel said he sees his role as “an activist…trying to educate the masses back home” on what secularism and “having value for human dignity while developing economically” can look like since they live in countries like the U.S. and Canada. He also said his position as a minority at home and in India also informed his decision to support the Congress party, as he does Democrats in the U.S.

Unlike the OFBJP, the IOC focuses more on furthering social causes in India rather than holding rallies. Jameel noted: “being social activists we took a very clear stance…don’t send money from America” to political candidates or anyone who could influence voters. Instead all efforts are focused on specific projects concerning water access, education, and women’s empowerment.

Manthena said the group does make some canvassing phone calls to family, friends, and associates back in India, but noted it was more for “sharing knowledge” rather than just campaigning for Congress candidates. “We are creating a bigger impact” beyond just securing votes, he noted. Much of the IOC’s work centers around social media, primarily through Facebook and WhatsApp groups.

One of the issues the IOC works to educate voters about is corruption in the political system and how it can mean voting against their interests though there may be an immediate reward. Manthena pointed to some candidates from other parties—not Congress—in this year’s election buying everything from air conditioners to pieces of silver jewelry to essentially “bribe” potential voters.

Unfortunately the group’s work did not translate at the polls, as Congress only held strong in two states but the IOC, its supporters, and those generally opposed to Modi and the BJP appear to remain undeterred.

In New York’s Washington Square there was a small group of mostly NRIs gathered to show solidarity with those fighting what they deemed the BJP’s Hindu extremism, shouting into a megaphone:

Suchitra Vijayan, a New York-based lawyer and founder of the hybrid research and journalism non-profit Polis Project, was in attendance and told Fortune the Indian diaspora will play a key role over Modi’s next five years in power.

Vijayan said not only does the diaspora help with fundraising—through in-kind contributions or donations to particular causes in India—and have a strong Congressional “political clout” to lobby for his positions, but the majority who support the BJP also see Modi as “ as the man poised to “remake the Indian political universe” after decades of Congress rule.

However, she noted, “there are a growing number of individuals and organizations who are… mobilizing and organizing to counter the politics of hate.” She and others at the rally see “a growing recognition that the fight is going to be fought both in India and in the diaspora communities” against the tide of Islamophobia, homophobia, government corruption, and money in politics.

If the disappointment and general mood was reminiscent of the days following Donald Trump’s victory in November 2016, this small group’s rhetoric and sentiments almost mirror those in the U.S. opposed to Trump in the intervening years; the “resistance” as it were.

—For India’s youth, these elections are about more than party politics