For India’s Youth, These Elections Are About More Than Party Politics 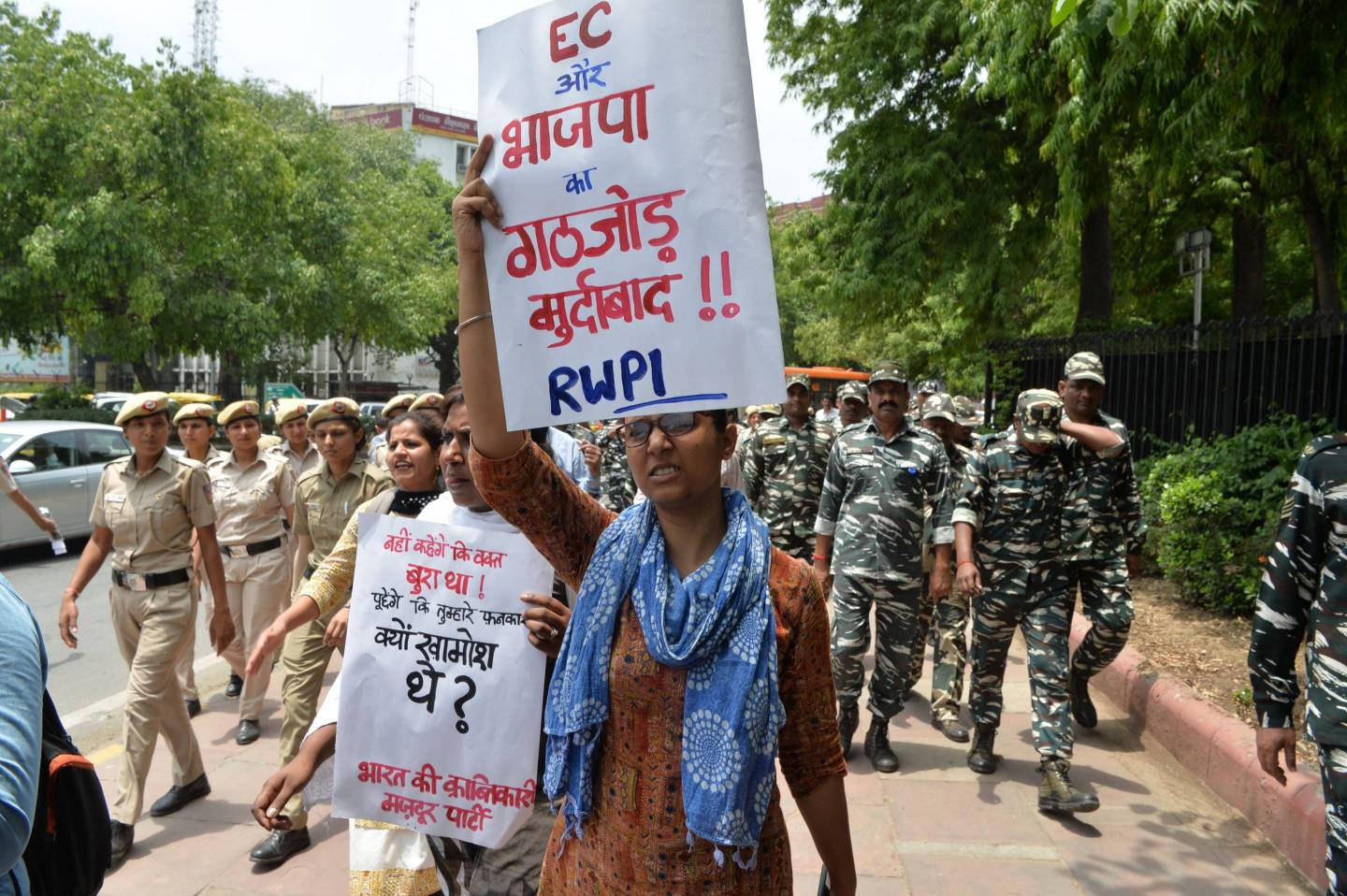 Activists of the Revolutionary Workers' Party of India hold placards as they protest outside the Election Commission office in New Delhi on May 22, 2019. - The Election Commission has rejected the charge by opposition parties that attempts were being made to manipulate the Electronic Voting Machines. The poll watchdog has said EVMs were "absolutely safe in strongrooms". (Photo by Sajjad HUSSAIN / AFP) (Photo credit should read SAJJAD HUSSAIN/AFP/Getty Images)
Sajjad Hussain—AFP/Getty Images

With 600 million people under the age of 35 in India, to say the youth vote in world’s biggest democratic election is crucial is an understatement. Yet, as the results of seven rounds of elections are set to be announced, the majority young Indians—many seeking jobs in the booming tech sector—have felt misunderstood by politicians across the political spectrum, fearing it puts their future, and the country’s, at risk.

“There is incredible hope about what India can be…but politics, particularly is a dirty word for most of them,” Nikhil Taneja, co-founder of Yuvaa, a Mumbai-based nonprofit storytelling platform for India’s youth, told Fortune.

Taneja, whose organization advocates for better mental health in a society which has been resistant to addressing those issues, said most of the students and young professionals he has encountered across India “are not very confident” in either of the main political parties—neither the current Prime Minister Narendra Modi’s Bharatiya Janata Party (BJP) nor main rival Rahul Gandhi’s Congress Party.

Instead, Taneja said, their political involvement seems to stem from supporting individual candidates and specific issues like women’s safety and empowerment, fighting corruption, and poverty, and climate change.

“They are betting on each other—their fellow youth—to bring change, versus age old political parties in India,” he explained.

While they may not have confidence in the system, they still come out to vote as both parties this year tried to court about 45 million new voters in the 18-25 age group. A survey of 200,000 Indians in the 18-25 age group conducted in March by the English-language news app Inshorts found around 85% think voting should be made mandatory because of how crucial they feel it is.

In 2014, voter turnout was incredibly high for that age group, around 70%. It was the youth vote that helped put Modi in power and make him popular among the global Indian diaspora.

As activist and a former leader in the student chapter of the Congress Party, Angelica Aribam, told Fortune, “some of the most vocal movements within the five years have been led by young men and women…[which created] a narrative about the power of the vote, leading to more youth exercising their voting rights to make their voice heard.”

Aribam explained the youth support for Modi in 2014 was largely driven by calls for a more transparent, less corrupt government and massive protests for women’s safety and rights following the heinous gang rape of medical student Jyoti Singh in the capital city Delhi.

They may believe in the power of the vote but what remains to be seen is if that enthusiasm for Modi and the BJP is still fervent as India experiences an unprecedented jobs crisis. According to the Center for Monitoring Indian Economy, the country lost as many as 11 million jobs in 2018 alone, the overwhelming majority of which were in rural areas. Women experienced a loss of 9.9 million of the jobs.

Computer science and engineering graduates from top-tier universities seem to have been spared much of the jobs competition but with millions of graduates in those fields the country faces increased ‘brain drain,’ according to 21-year-old Delhi University political science student Varya Srivastava. She told Fortune that fewer and fewer of her peers stay in India after graduating and even fewer have come back after studying abroad, mostly due to job opportunities.

And yet, as Shamitha Naidu, a 20-year-old student in Mumbai, told Fortune: “literally, no politician that campaigned for my constituency even spoke about employment [or] unemployment rates in India. Doesn’t seem like a priority question these 2019 elections.”

Radio host and Indian Election Commission voting awareness ambassador for the state of Gujarat Harshil Shah, 35, told Fortune that even though there is acknowledgement of the country’s increasing economic status in the world, politicians campaigning around his state “avoided” discussing issues like the current “economic slowdown.”

Shah said most of the people around him are from the private sector and business community who have concerns about Indians having “less cash on hand” these days than before, but politicians were not keen to talk about that and focused mostly on international relations and “creat[ing] buzz about” tensions with Pakistan and in Kashmir.

Exit polls have shown the BJP with a lead as the Indian economy showed some small signs of recovery in the first quarter of 2019, despite decreased consumption. But Srivastava warned that framing the youth vote under the “binary” of the two main candidates up for prime minister, Modi and Gandhi, would be “reductive” and not give a true picture of how youth feel about this election and their government, whoever is announced as winners on May 23.

The underlying anxiety about India’s future—their future—goes beyond political affiliation for her and many of her friends. Despite the Inshorts survey from earlier this year finding that nearly 75% of young Indians “do extensive research before” casting a ballot, that has not been what Srivastava has seen.

She explained that even her well-educated friends “don’t know who their candidates are and I have friends who have gone and voted purely based on party” because of the “binary” system that makes people think they are directly putting Modi or Gandhi into the prime minister seat.

What that thinking “fails to see is is that I’m electing neither of them to power, I’m actually electing a candidate from my own constituency,” Srivastava said, adding that for many people her age, “politics comes down to who the prime minister is and not much beyond that.”

The day-to-day concerns of the so-called Generation Z do not only get addressed by the top leaders of the Indian government, however. This has led to a government with “no investment in building social infrastructure, human infrastructure, or actual infrastructure” to address important issues to these young people, like women’s security, gender and caste equality, LGBT rights, better quality education, and less corruption, regardless of where people may fall on the political spectrum, Srivastava said.

Amanda Castellino, 26, who works as a brand strategist in Mumbai, felt much the same and did not vote this year as a result. She told Fortune the parliamentary and local candidates in her constituency “did not really focus on core issues around civic apathy, safety for women or even the infrastructural mess Mumbai has become…[and] were mostly were divided on religious and caste lines.”

Castellino said “all we have is conversations around religion and terrorism and subtle targeting of minorities which at times becomes criminal and murderous” without substantive policy discussions on a population that is getting younger, more diverse, and less educated about how government works at all levels.

One of major issues is that Modi is “a markets reformer…not a social reformer” which has led to the slight economic recovery, but still too much of a focus on stocks as an indicator and not enough attention paid to making sure she and her friends have better job security and growth within in India.

Still, hope for a bright future remains, albeit with cautious optimism.

Srivastava said India’s youth are not being sufficiently trained to deal with challenges like automation, need for innovation, and agricultural challenges of the future because politicians only look at economic growth in terms of numbers and not “the kind of humans, people we are creating.” However, she does see the immense potential of her generation to adapt and thrive—just not in the current political system where BJP and Congress have dominated the political discussion despite a multi-party system. She said the potential really lies in “larger social movements” pushing for institutional change both in culture and government.

Both Taneja and Shah noted they see a brighter future for this generation of Indians because of the change and activism it has created using social media but as Taneja said: “The challenge, though, is not about the country’s future—but about their place within it.”

—Can Roe v. Wade be overturned?

—Breaking up Facebook is quickly becoming a 2020 campaign issue