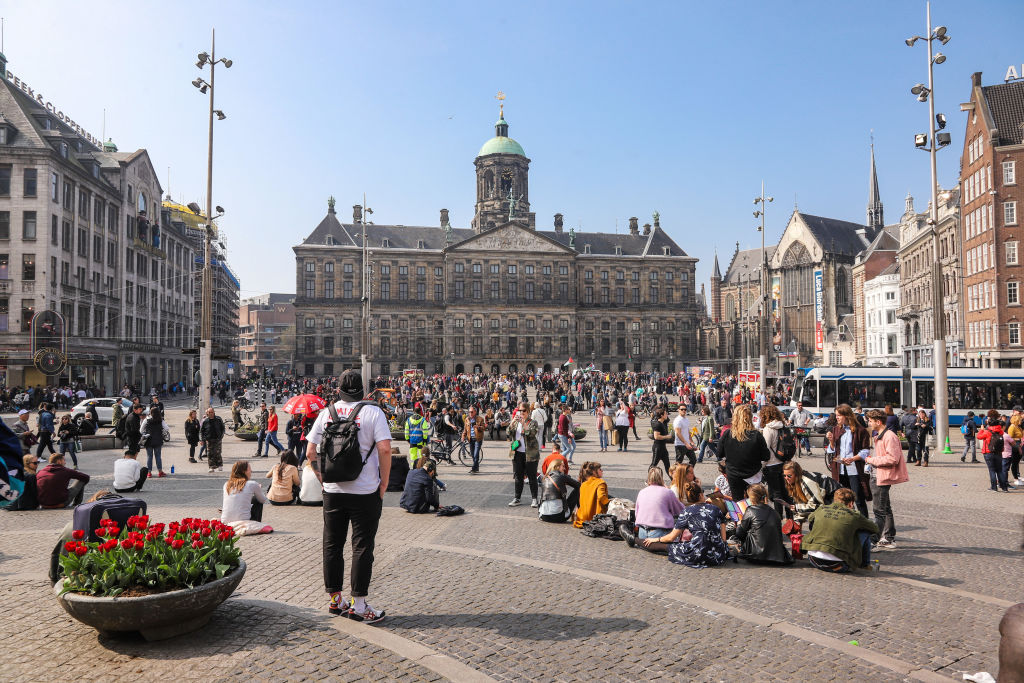 Dam Square in Amsterdam, a town square in the Dutch capital. Dam Square is a popular historic market square in the center of the city for locals and tourists with the Royal Palace, the Nieuwe Kerk ( New Church ), National Monument obelisk a pillar of stones designed by J.J.P. Oud to commemorate the victims of World War II, Madam Tussaud's Wax Museum and various hotels and shops. (Photo by Nicolas Economou/NurPhoto via Getty Images)
NurPhoto via Getty Images

Want to visit Amsterdam? Well, how about a trip to Harderwijk instead?

That’s the message from the Netherlands Board of Tourism & Conventions (NBTC), which has taken the unusual decision to stop marketing the city of Rembrandt as a tourist destination.

The reason? Over 17.5 million sightseers visited Amsterdam in 2016 and based on current growth models, that’s expected to double by 2030. The Dutch believe they’re faced with a stark choice: act now or pay the price later.

“If we do not take pre-emptive action, the livability in cities and iconic locations will suffer due to visitor overload,” says the NBTC strategy report Perspective 2030, adding that “more is not always better” if it means Amsterdam becomes filled with “nuisance” groups.

Residents are feeling increasingly marginalized from public transport and local cultural organizations in their own cities, prompting a rise in tension between the restaurants, coffee shops and hotels that profit financially from mass tourism, and individuals who believe they’re personally suffering the consequences.

The NBTC is going as far as to issue threats: should a coffee shop, bar or hotel fail to reduce the fallout from nuisance groups through better management of their customers, then “alternative measures will have to be taken,” says the Perspective 2030 report. “If all else fails, the attractions [the tourists] are visiting may have to be closed down.”

The NBTC’s objective means dispersing visitors: instead of marketing Amsterdam as a weekend destination offering a heady mix of romance, art, and exotic nightlife, the aim is to now use the city “as a tool” that lures visitors to other parts of the country, says Elsje van Vuuren from NBTC.

“We will say to the visitor, ‘If you are interested in a museum or Rembrandt, then you may be also interested in an exhibition of Rembrandt in DenHaag or maybe a Dutch Golden Age tour in Middleburg,” she told Fortune. The hope is that lesser-known regions of The Netherlands, such as the nine historic Hansa Towns in the east of the country, will then share more of the tourist riches that in 2017 accounted for 4.3% of Dutch gross domestic product, equal to $31.6 billion.

The Netherlands is by no means the only European destination adopting unique methods of tourism-control either. According to the World Tourism Association, more than 713 million people visited Europe in 2018, an increase of 6% over 2017. While this generates billions of dollars in income—the World Travel and Tourism Council (WTTC) estimates travel and tourism accounted for 9.7% European GDP in 2018—it’s also partly responsible for severe overcrowding in places such as Barcelona, Spain; Venice, Italy; and Dubrovnik, Croatia during the peak tourist months of July and August.

This, in turn, impacts the lives of locals, who may not necessarily benefit from the huge crowds. That’s especially true when the hoards are sourced from 6,000-passenger cruise ships, whose hulls fill the streets with day-trippers looking to view the sites without stopping in a neighborhood bar or booking a local hotel.

That’s the rationale behind Venice’s introduction of an ‘entry fee’ of 10 euros in September for its 15 million yearly day tourists (out of a total of 24 million annual visitors).

Money from the fee “will be used to ensure that those who come to the city on the same day can contribute to the expenses necessary for the maintenance of Venice,” says Venice Tourism Councillor Paola Mar.

By 2021, Venice aims to go one step further and implement an early booking system for access to the city. The hope is that Venice will ultimately be able to regulate the number of visitors, while also providing tourists with the information to schedule trips during less crowded months.

The war against ‘Barcelona in a Day’

In Barcelona, the situation is possibly even more acute. In 1990, the city received 1.7 million tourists; in 2018, the figure was 32 million—around 20 times the resident population. This influx has led to protests against the flood of tourists, with accusations that it is harming the landscape, damaging beaches, and pricing residents out of the property market—partly through the growth of home-sharing platforms Airbnb and HomeAway.com, which were fined €600,000 each in 2016 for listing unlicensed rentals.

In January 2017, the regional government of Catalonia responded with a prohibition on new hotels in Barcelona’s city center. Now it’s attempting to alter the pace of tourists’ visits by prioritizing cruise ships that begin or end their journey in the city’s port, Europe’s busiest cruise terminal, so that passengers are more likely to book extended stays in the city—and invest in the local economy—instead of just ticking off landmarks.

“If you go to Barcelona just to take a picture in front of La Sagrada Familia and then leave, this doesn’t actually benefit Barcelona citizens,” says Teodora Marinska, head of finance and public affairs at the European Travel Commission (ETC). “If you stay for one week and you try to taste the local cuisine and go to a local concert and see a bit of Catalonia, then this is the type of tourism that benefits people more, and it’s the type of tourism that we want to see more of.”

Despite these efforts, Europe is not quite as over-crowded as it might appear. The ETC estimates over-crowding only affects 10% of European destinations and is largely restricted to peak tourist season. For every European city suffering from over-crowding, there are dozens more with rooms to rent and restaurants to fill.

Unlike much larger European tourism-hubs such as London or Paris, many of the cities blighted by over-tourism are also relatively small, historic destinations that simply aren’t designed for the masses.

“If you think about Venice, it is a very small place,” says Marinska. “It was built so many centuries ago with a completely different perspective of how it should be used.”

It’s partly for this reason that Barcelona is implementing a new urban plan that aims to transform more than half the city’s streets into mixed-use public spaces, or “superblocks,” where residents can walk, bike, or just hang out.

An integrated approach “to air, rail, road and water traffic” is also one of the ‘Five Strategic Cornerstones’ of Perspective 2030 in the Netherlands, where the hope is that visitors and residents will benefit from “maximum accessibility, from the first to the last kilometer”, making it easy to explore the country beyond Amsterdam.

Amsterdam itself is aiming to diffuse tension between businesses and residents with targeted taxes, increased enforcement of rowdy bars and nightclubs, and by giving locals a greater voice in neighborhood decisions.

So, while overcrowding may be a huge annoyance—and makes it impossible to view a Rembrandt or a Gaudi landmark without taking a selfie stick to the eye—it may also prove to be something of a turning point.

“We are striving to strike a balance between inhabitants, between visitors and between companies,” says van Vuuren from NBTC. “If there is a balance in those three target groups, then a region or city becomes a more livable place. For everyone.”