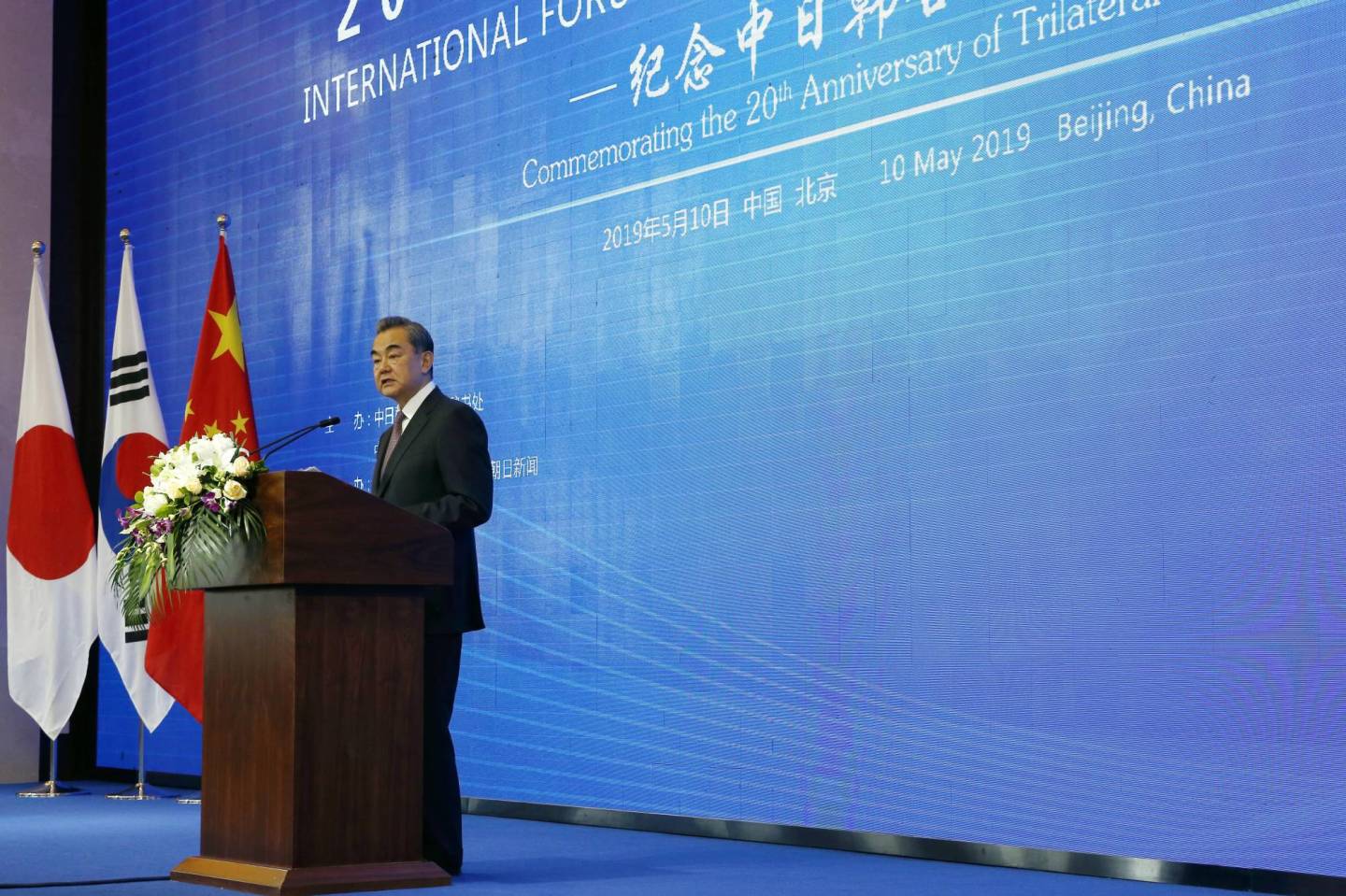 We were just wrapping a dinner panel in San Francisco to promote the upcoming Fortune Global Sustainability Forum in China’s Yunnan province this fall when news emerged that another round of U.S. tariffs against its trade adversary would shortly take effect.

The damage already has had an impact. Lu notes Chinese direct investment in the United States has plummeted. Chung says entrepreneurs have redoubled their efforts to gain access to markets like Indonesia, China, and Malaysia, despite the tension.

If China’s trade delegation leaves Washington, D.C., without a deal, expect markets to get hammered, particularly tech stocks. The market rallied Thursday on hopeful words from the president, then started falling on Friday morning. Actions by trade negotiators will speak louder than words.

All of Silicon Valley focused Thursday on the bombshell op-ed by Facebook co-founder Chris Hughes, who argues that his former company should be broken up. I read his manifesto carefully. It is a thoughtful, erudite, passionate (but not emotional) argument for why his friend Mark Zuckerberg has amassed too much power. He argues that Facebook needs to be cleaved quickly, before it accomplishes the self-serving task of integrating Instagram and WhatsApp with Facebook itself. Hughes’s words pack a punch as much for their well-argued eloquence as his insider’s knowledge and defense of his friend’s humanity. Facebook doesn’t need breaking up because Zuckerberg is a bad person, Hughes argues, but because the concentration of so much power in Zuckerberg’s hands is a bad thing.

Driving range. Marking the largest tech IPO in five years, Uber priced its shares at $45, the low end of its planned range, to raise over $8 billion in fresh backing. The deal values the #1 ride hailing firm in the world at about $82 billion, which could rise or fall when trading, under the symbol UBER, starts later today. What was the prior larger IPO? Answer below. The company also disclosed it has reached a settlement with 60,000 drivers who had sought arbitration over their employment classification. The deal could cost the company up to $170 million.

Mining for moolah. They say on Wall Street that markets don’t hit bottom and start rising until after capitulation, when all the disappointed sellers have given up and gone home. Maybe bitcoin has passed that stage, as the cryptocurrency finally seems to be on the rise. On Thursday, bitcoin nearly reached $6,000, its highest level in 2019.

Dropped in the toilet. Speaking of hitting bottom, smartphones sales in North America in the first quarter totaled just 36 million, the lowest in five years, according to research firm Canalys. The 18% drop from last year's first quarter was also the steepest decline ever seen in the market. Apple grabbed 40% of the shrinking market, Samsung 29%, and LG 13%.

Running up the score. More-than-a-cloud-storage-site Dropbox pleased investors, reporting first quarter revenue rose 22% to $386 million while adjusted earnings per share rose 25% to 10 cents. Shares of Dropbox, already up 14% this year, gained another 7% in premarket trading on Friday. At Chinese e-commerce platform JD.com, service revenue jumped 44% to $1.9 billion, helping push up its shares 10%. They've already gained 31% this year. At Symantec, the story wasn't the $1.2 billion of revenue, but the departure of CEO Greg Clark, who wants to spend more time with his ailing father. The shares had been up 17% this year but plunged 15% in premarket trading.

Rejected. The state-owned wireless carrier of China, China Mobile, won't be offering service to Americans after the Federal Communications Commission voted unanimously on Thursday to reject its application. The state link raises the risk that the carrier could "conduct activities that would seriously jeopardize the national security, law enforcement and economic interests of the United States," FCC chair Ajit Pai said.

Fly me to the moon. Space loving Amazon CEO Jeff Bezos on Thursday unveiled a design for a moon lander that his other company, Blue Origin, could build to help NASA get back to the celestial body in a few years. “We are going to build a road to space,” Bezos said at the unveiling. “And then amazing things will happen.” Rival space loving billionaire Elon Musk couldn't resist tweaking Bezos on Twitter with an off-color joke.

My Cousin Was My Hero. Until the Day He Tried to Kill Me. (The New York Times Magazine)
For years, I was drawn to his strength, his bravado, his violence. But then he forced me to come to terms with how that idea of masculinity poisoned his life — and mine.

Can Bird build a better scooter before it runs out of cash? (The Los Angeles Times)
Today, facing a crowded field of competitors, pushback and fees from local governments, and fundamental questions about whether any company can make money by releasing electric scooters into the wild and charging per ride, staying aloft is proving harder than it first appeared.

The Joy of Watching (and Rewatching) Movies So Bad They’re Good (Long Reads)
Whether we stream our featured attractions, get them from Amazon, or tape them off movie channels, we’ve instinctively learned what makes a bad movie fun.

A Short Seller Bets It All on a Spectacular Market Crash (Bloomberg)
Horseman Capital’s Russell Clark has been bearish for more than seven years. And if he’s wrong? “This could be my farewell interview,” he says.

We've seen emojis entering every realm of communication and even come up in legal trials as evidence of intent. The tiny cartoon symbols have steadily gotten more diverse, to better reflect what people's thumbs up and embarrassed faces actually look like. Now Google is adding 53 gender ambiguous emojis to Android. Mark Wilson at Fast Company delves into the rationale for the latest diversity initiative in emoji-land with Google designer Jennifer Daniel:

She traces it back to the age-old problem with the male bathroom symbol. “That person could be man, woman, anyone,” she says. “But they had to add a little detail, that dress, and suddenly that person symbol doesn’t mean person anymore; it means man. And that culture means a man-centered culture.” While Daniel can’t fix our bathroom signage, as the director of Android emojis, she can fix another problem: The lack of gender-neutral symbols in texting. She can give us the zombies, merpeople, children, weightlifters that are neither male nor female. “We’re not calling this the non-binary character, the third gender, or an asexual emoji–and not gender neutral. Gender neutral is what you call pants,” says Daniel. “But you can create something that feels more inclusive.”

It's Time to Start Planning a (Work-Free) Vacation. Here's Why. By Anne Fisher

Here's What Analysts Are Saying About Uber's IPO By Danielle Abril

You Can Buy an Original iPod on eBay for $19,995 By Chris Morris

Debt Collectors Are About to Call You Less, But Text You More By Chris Morris

Artist Salvador Dalí's death in 1989 deprived the world of his unique wit, personality, and style. Or did it? Now the Dalí Museum in St Petersburg, Fla., has created a walking, talking, A.I.-fueled Dalí video simulation that can interact with visitors to bring the famous quipster back to pseudo-life. “The only difference between a madman and myself is that I am not mad," A.I. Dalí likes to say. Strange times, indeed.