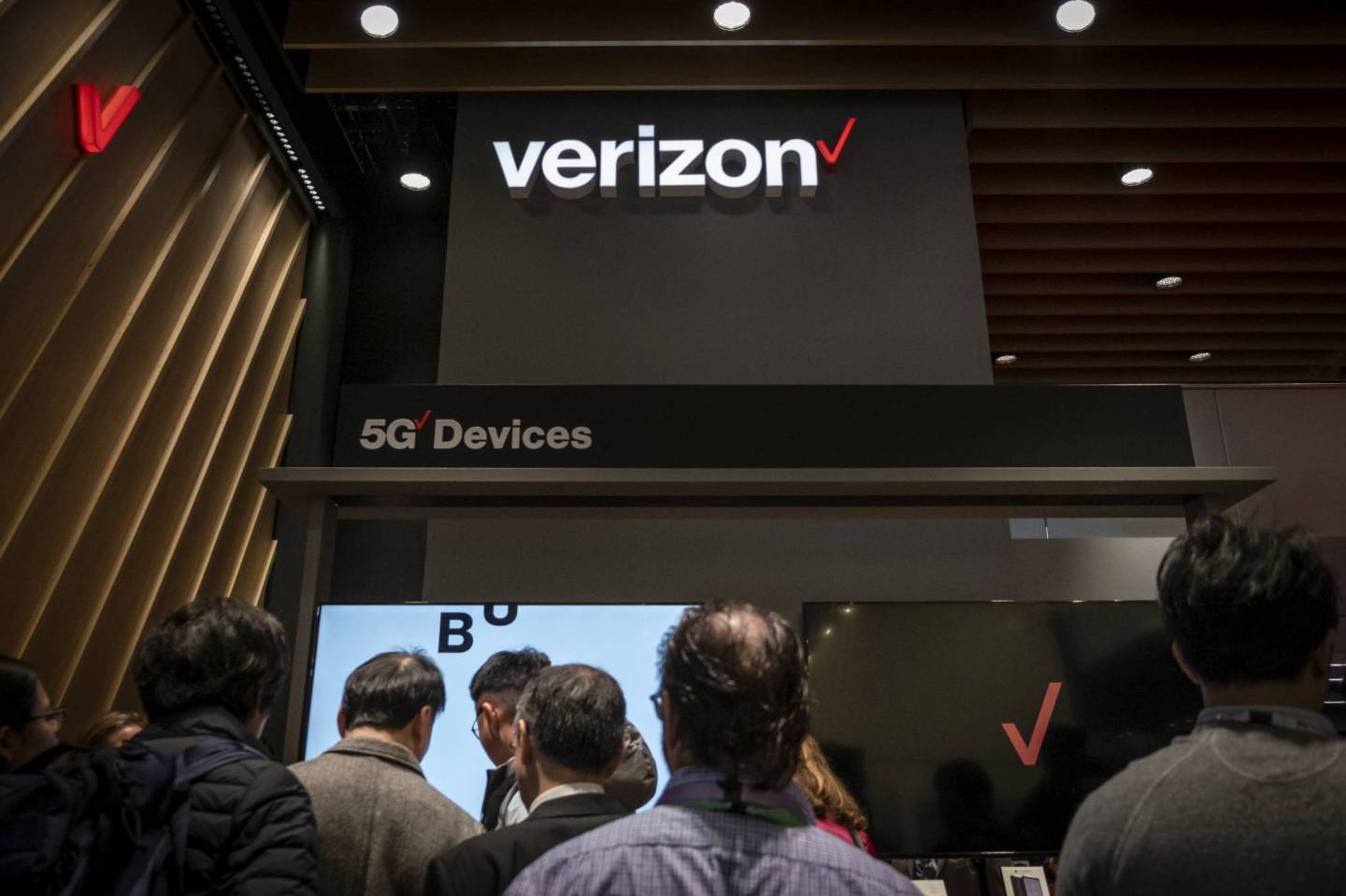 BARCELONA, CATALONIA, SPAIN - 2019/02/25: The Verizon logo is seen during MWC 2019. The MWC2019 Mobile World Congress opens its doors to showcase the latest news of the manufacturers of smart phones. The presence of devices prepared to manage 5G communications has been the hallmark of this edition. (Photo by Paco Freire/SOPA Images/LightRocket via Getty Images)
SOPA Images LightRocket via Getty Images

When Verizon consumer group president Ronan Dunne and his team pressed the button to send out their press release last week announcing the first 5G mobile phone service, they made sure to do it just before 11 a.m. Eastern Time.

That’s because across the globe, on the other side of the International Date Line in South Korea, 11 a.m. Eastern on April 3 is midnight on April 4. And Dunne, who’s headed up Verizon’s push to build a super-fast fifth generation, or 5G, network, wanted the bragging rights of being first not just in the United States, but in the world. Korean carriers, who’d originally said they were launching on April 8, had pushed up their announcement to April 4. Dunne’s press release went out at 10:58.

“So we date stamped it—whether you’re in Korea or whether you’re in the U.S.—we were the first network that launched on the 3rd of April,” a very proud Dunne told me when he was in Boston the next day. “That’s our little piece of history.”

The Irishman who came to Verizon almost three years ago from British wireless carrier O2, where he was CEO, was also sporting a special lapel pin he’d had made up touting the 5G push. And it’s been quite a push, perhaps even a mad dash.

Testing with select customers started back in April 2017. Last October, the carrier started a limited, home Internet 5G service in parts of four cities. Then rival AT&T started a mobile service via a portable Wi-Fi hotspot in 12 cities in December. This February, Verizon said it would finally offer a phone-based mobile 5G service in 30 cities at some point this year. And then just last month, Verizon named Chicago and Minneapolis as its debut markets. With the debut set for…April 11. Fortunately for Dunne, the service was ready to go a week early.

Still, the initial reviews are a bit rough. The service only works in a few parts of the two cities and only with one particular Motorola phone using a special add-on pack. Samsung’s much slicker and (likely) more popular 5G edition of the Galaxy S10 phone is coming “relatively soon,” Dunne says. (Leaks predict a mid-May launch.) Tens of thousands of Verizon customers around the country have signed up to be notified of its arrival, he says. And Dunne promises network coverage will improve and expand “literally day by day.”

While Wall Street and many reviewers have expressed a healthy skepticism about the impact of 5G this year, Dunne remains exultant that Verizon’s winning the race—at least so far. Sprint says its 5G service is coming in May and T-Mobile is targeting the second half of the year. Both say their networks will have much better coverage. For now, only Dunne can take a victory lap, however:

“The reality of 5G is here and unequivocally proven because of our network and technology leadership,” he says. “The timing of whether it’s big in quarter X or quarter Y is a high quality problem. Two years ago, people were debating whether 5G was real. We just proved it.”

Money, money, money. In a race of another sort that's consuming the tech world, video conference service Zoom says it is looking to go public next week at up to $32 per share, which would value the startup at over $8 billion. That follows the news we noted yesterday that Pinterest is looking to price its IPO soon at up to $17 a share, or a valuation of $11 billion. Contrary to some headline you may have seen, these two deals have not been "priced." They've offered an indication of where they plan to price when the deals are actually sold to investors. Stay tuned.

Big air. Drone delivery is coming to Australia. Aviation regulators there approved a service proposed by Google parent Alphabet's startup Wing to bring orders from coffee shops and pharmacies to homes near Canberra.

Turn it off–like a light switch. China is considering banning digital currency mining. The computing-intensive process to generate bitcoin and other cryptocurrencies is seen as an electricity hog that contributes to pollution, according to a notice published by the country's National Development and Reform Commission. No timeline on further action yet.

Turn it off, the sequel. Excited about the recent rumor of the all-new Apple MacBook Pro with a 16-inch or larger screen? Don't be. Original rumor purveyor and analyst Ming-Chi Kuo now says it's not a 2019 product, but more like 2021. Yawn.

Turn it on–like a light switch. So that money you were saving for the MacBook Pro? IKEA and Sonos have a few proposals for you, coming this summer. A combination table light and connected speaker dubbed the Symfonisk lamp will sell for $179. A bookshelf speaker will sell for $99.

The battle over regulating social networks has focused on all the many faults and ills those services have rained down on society. There's obviously another side to the story–why else would billions of people continue using Facebook, Twitter and their ilk if there weren't also major benefits? Writer Don Reisinger explores this other side in an essay for Fortune touching on the recent death of his dad. After his father passed away, Reisinger took a close look at the man's Facebook account. What he discovered surprised him:

As I skimmed through his posts, I realized that what I thought I knew about Facebook and social media was at least partially wrong. To me, social media was a tool—part business, part personal—that was all too often used to sow discord. But for my dad, it was an opportunity to connect, to share.

It didn’t take long for people to find out that my dad had died. Some members of the local history groups he enjoyed noticed that he hadn’t posted in a few days. Others saw his obituary. Soon enough, the condolences poured in. Announcements were made in Facebook groups. Both my mother and I loved seeing all of the comments about how much my dad had helped people in ways that enriched their lives.

Europe Thinks Ethics Is the Key to Winning the A.I. Race. Not Everyone Is Convinced By David Meyer

Apple AirPower Is Vapor, but These 4 Wireless Chargers Are the Real Deal By Emily Price

The prestigious Abel Prize for outstanding work in mathematics this year went to a woman for the first time, University of Texas professor emerita Karen Uhlenbeck. The retired math whiz was recognized for her pioneering work describing how bubbles arise to create a foam. The New York Times has a profile, including Uhlenbeck's actual foam formula, for those so inclined to do a few calculations.