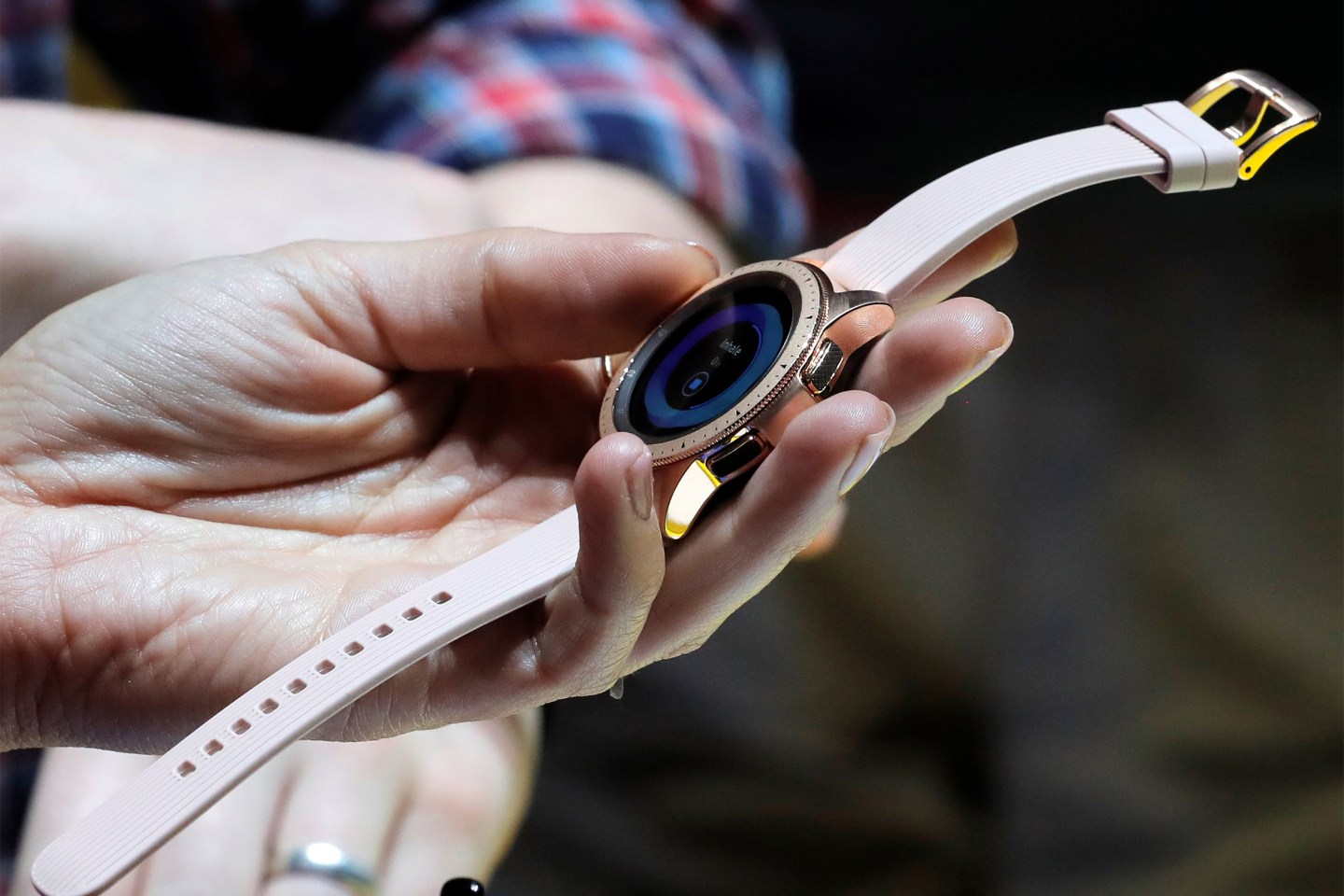 In the Steve Jobs era, a sort of sad thing would happen to competitors all the time.

One example, from about 10 years ago, bit Microsoft. The iPod had been a hit for a while when the software colossus of Redmond decided it was time to join the party. The Zune, introduced by Bill Gates at a big kickoff event in September, 2006, matched the iPod almost feature for feature, included song sharing with friends over Wi-Fi, and had one of the earliest music subscription plans dubbed the ZunePass. And it got pretty great reviews; CNET said it was “a very good start” and its future was “a bright one.”

Then Jobs came out with the iPhone and, a few months later, the iPod Touch. (Although he spent a staggering amount of time at that event showing how to turn songs into ringtones.) That killed the Zune’s momentum, and sales never really took off.

Some people like to whine that Apple is not as innovative as it used to be back in the Jobs era, but it sure feels like the competition is about to get Zuned. Apple hasn’t announced its September event yet, but it’s widely expected for around September 11 with rumored new iPhone and an Apple Watch on tap and maybe a smart speaker addition, too.

Samsung tried to get the jump on Apple on Thursday with its “Unpacked” event at the Barclays Center in Brooklyn. Standing on the home court of one of the NBA’s losing-est basketball teams (the Nets), Samsung’s head of mobile D.J. Koh offered a new Galaxy Note 9 phone, a Galaxy Watch, and a smart speaker dubbed the Galaxy Home. But everything felt like a minor follow-on. The Note had no new major features. (Koh told the Wall Street Journal he stayed away from cutting edge features to avoid a repeat of the Note 7 battery debacle.) The watch got LTE cellular connectivity (like last year’s Apple Watch) and a smaller size better for women’s wrists (like the 2015 original Apple Watch). And the speaker, which doesn’t have a price or release date, looks much like Apple’s not-quite-a-flop HomePod.

I don’t think Tim Cook & Co. will have too much trouble dribbling past that line up.

King of the castle. Web traffic to Facebook's site has almost fallen in half since 2016 and the site is in danger of losing its second-place overall ranking (with Google search in first place) to YouTube, market tracker SimilarWeb reported on Thursday. But Facebook is more than making up for the loss of web visitors via booming usage of its mobile app, the firm said. There's also a battle brewing between fourth-ranked Yahoo, now owned by Verizon, and fifth-ranked Amazon. The e-commerce site will likely pass the fading online portal in two to three months.

Free as in speech. Microblogging service Gab.ai removed two posts by a neo-Nazi that threatened violence after Microsoft, which hosts the site on its Azure platform, objected. Also on Thursday, Facebook added a new category to the types of posts it won't permit: those that "financially endanger people." And the giant social network banned sites that share detailed information on building 3D-printed weapons. Meanwhile, Apple tried to explain why it banned podcasts by false conspiracy theory spreader Alex Jones but didn't remove his iOS app.

Bygones. Taiwan's antitrust enforcer, the Fair Trade Commission, made a deal with Qualcomm over alleged unfair licensing of chips for mobile phones. The commission canceled most of the $773 million fine it had imposed last October. Instead, Qualcomm pays $89 million and agrees to spend $700 million over five years on R&D in the country.

The continuing story of a quack who's gone to the dogs. In day three coverage of the "will Tesla go private" controversy, CNBC reports that the company's board plans to meet next week with financial advisors to discuss CEO Elon Musk's plan, without Musk in the room.

Zoom, zoom, zoom. The first truly electric car from Porsche is coming next year and the latest bits of news make is sound like a real doozy. The 2019 Taycan will have a 310 mile range and generate 600 horsepower. Zero to 60 time is said to be “well under” four seconds. The price is still unknown.

Rollercoasters. On Wall Street, Dropbox disappointed while Yelp stunned on the upside. Dropbox said second quarter revenue increased 27% to $339 million and adjusted earnings per share nearly doubled to 11 cents. Both figures were better than analysts expected, but COO Dennis Woodside is leaving the company. Dropbox shares, which had been up 64% since its IPO in March, were down 8% in premarket trading on Friday. Yelp said its revenue gained 12% to $235 million and earnings per share rose 33% to 12 cents. Both were better than analysts expected but hardly explain why the company's stock, previously down 9% this year, jumped 29% on Thursday.

Kevin Kelly (The Caret)
Renowned tech guru and futurist Kevin Kelly built his career on a knack for knowing what’s next. A hippie and college dropout, he found his way into magazines in the 1980s as editor of the beloved counterculture quarterly Whole Earth Review. The Caret caught up with him to talk about—what else—the future.

In L.A.'s Street-Racing Scene, 'Likes' and Followers Can Be Just As Important As Engines and Tires (Los Angeles Times)
Popular Instagram accounts, YouTube channels and other forms of social media have served as a bullhorn for Los Angeles’ street-racing community in recent years.

The Sadness of Deleting Your Old Tweets (Wired)
I held my breath and pushed the button. “Delete All,” it read. Yes, I clicked, do it. “Are You Sure?” it asked. I wasn’t. But I’d made a decision, about which I’d written an entire article already, and I wasn’t about to renege.

Spike Lee Wants BlacKkKlansman to Wake America Up (Time)
The director’s provocative new film will change the way you think about racism.

When Spotify went public in April, it didn't use a traditional initial public offering. In an IPO, a group of Wall Street banks buy shares from the company and underwrite their offering to the public, while collecting substantial fees, of course. Spotify instead simply directly listed all the shares it had already issued on the stock exchange, allowing free trading to commence. The deal seems to have worked out fine (the shares have gained 26% since the first day) and now CFO Barry McCarthy has taken to the Financial Times to argue that other startups should follow suit.

Many news stories I have read about Spotify’s direct listing also emphasise the fact that, unlike a lot of newly-listed companies, we didn’t need to raise capital to fund our growth. That is true. We deliberately developed our company in a way that enabled us to go public without raising additional money.

Other companies might not have that luxury, but they can still benefit from a direct listing. Here’s why. Deciding whether a company needs to raise money is an important strategic question. So is the issue of whether it needs a public stock listing. But it is a mistake to conflate the two.

Raising money from an IPO is an entirely tactical decision and should be weighed against all the other funding alternatives for private and public companies. Many of the other choices are considerably less expensive than a traditional IPO. If you want to take your company public, that is a different question — one that should not be solely about raising capital.

The Murky Business of Spotify 'Playlist Pitching' By Aric Jenkins

An undersea computer cooling experiment is also providing an interesting window on a weird world. Microsoft in June submerged an automated server farm in the sea off the Orkney Islands near Scotland. But they also hooked some webcams, offering a peek at all the curious creatures who approach. Check it out at the web site for Project Natick.