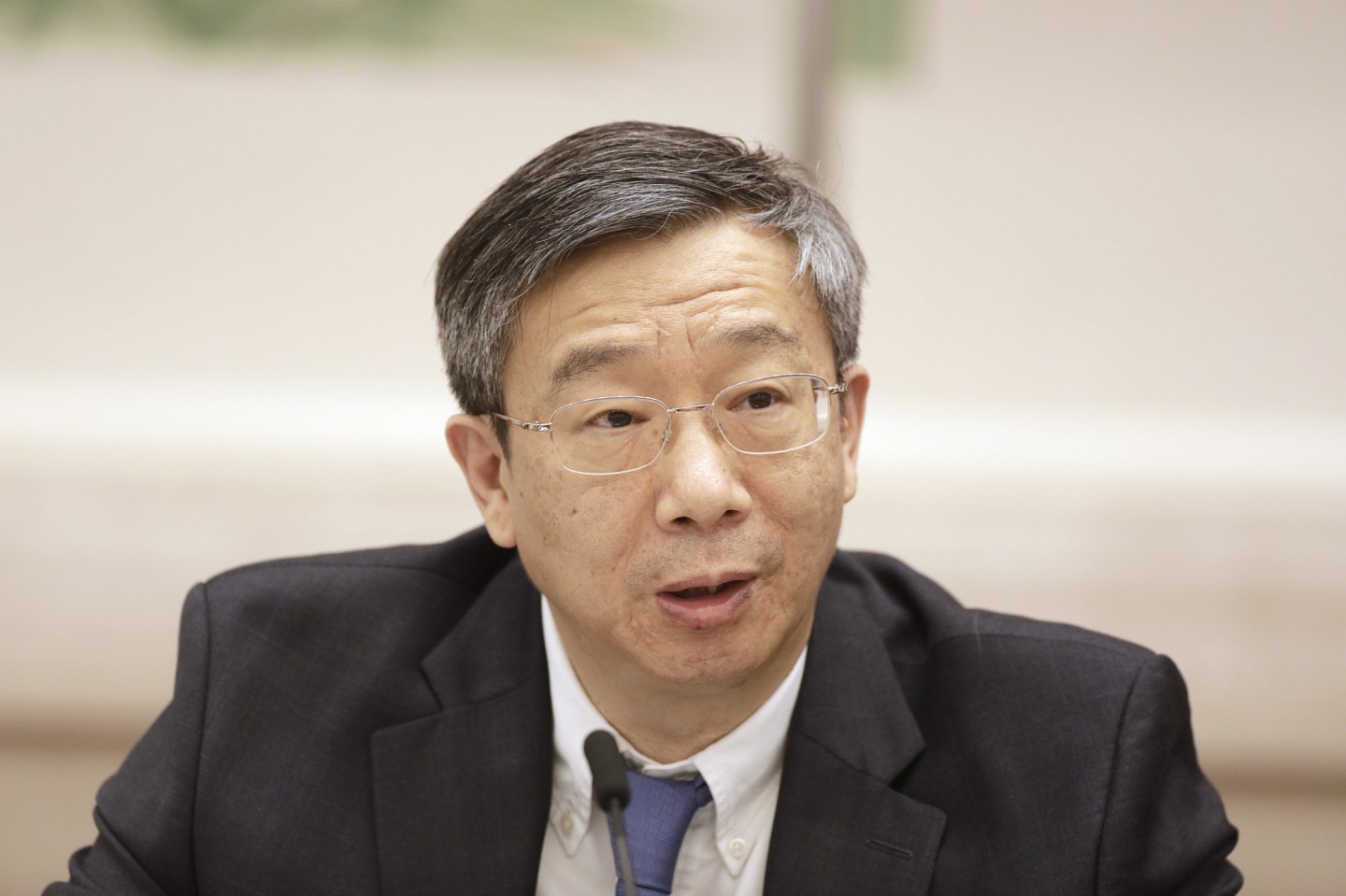 China named Yi Gang to run its central bank, elevating a long-serving deputy governor with deep international links to the forefront of efforts to clean up the nation’s financial sector and modernize monetary policy.

The National People’s Congress, China’s legislature, voted Monday to approve President Xi Jinping’s choice for governor of the People’s Bank of China. Liu He, Xi’s top economic adviser, was named as a vice premier, signaling that he will take the lead role in policy-making with Yi in support.

By promoting an official who has served as No. 2 to incumbent governor Zhou Xiaochuan for more than a decade, China is signaling that it is seeking policy continuity at the central bank. Now set to retire, Zhou, 70, has steered the institution through the global financial crisis, overhauled monetary policy tools and overseen the elevation of the yuan to reserve-currency status during his record 15-year term.

Speaking on Bloomberg Television Sunday, U.S. Treasury undersecretary for international affairs David Malpass said Yi is a “very strong technical leader with lots of skills” and that the U.S. looks forward to a “strong dialog with the leaders that China designates.”

Yi, 60, inherits an institution that, while more influential at home and abroad than the one that Zhou took over in 2002, faces much more complex challenges. The most pressing will be pushing forward with Xi’s financial cleanup without crashing an economy that’s heading toward a debt-to-output ratio exceeding 300 percent.

“The main task is that we should implement prudent monetary policy, push forward the reform and opening-up of the financial sector, and maintain the stability of the entire financial sector,” Yi told reporters Monday at the Great Hall of the People in Beijing following his appointment.

Separately, Liu Kun, a former deputy finance minister, was nominated to replace Xiao Jie as chief of that body, while Commerce Minister Zhong Shan was re-nominated to his post, state media reported.

The PBOC faces those tasks at a time of major institutional changes. China this month merged its bank and insurance regulators, a move that gave the central bank power to write rules for the financial sector, and likely makes it the most powerful body in the new Financial Stability and Development Committee.

Still, with Liu He as vice premier, Yi’s appointment as PBOC governor signals that the central bank will be run by a tested official while overall policy direction will be set by Xi’s top economic adviser.

The succession comes amid changes atop global central banks and their shift away from years of easy money. Jerome Powell succeeded Janet Yellen as Fed chair in February and Bank of Japan Governor Haruhiko Kuroda is set to begin another term. And though European Central Bank President Mario Draghi doesn’t conclude his time in office until late next year, jostling over his replacement has already begun.

Yi faces an immediate task of calibrating the PBOC’s response to monetary policy normalization in the U.S.

“China’s monetary policy should be mainly based on domestic economy and finance situations. We need to consider it comprehensively,” Yi said at a press conference on March 9 when he was asked about whether the PBOC will follow prospective Fed rate hikes.

Yi joined the central bank in 1997 and served in a succession of roles before promotions to deputy governor and administrator of the State Administration of Foreign Exchange. As head of the currency regulator, he presided over expansion of the world’s largest foreign reserve stockpile, which peaked in 2014 at nearly $4 trillion, along with more loosening of currency trading restrictions and greater emphasis on increasing the yuan’s international use.

Like Zhou, Yi is a fluent English speaker with longstanding links to global economic leaders. Yi earned a business degree at Hamline University in St. Paul, Minnesota, and a Ph.D. in economics at the University of Illinois before moving to Indiana University at Indianapolis as a professor in 1986, according to his official PBOC biography.

While lacking the independence afforded the leadership of most major central banks, Yi will influence decisions that help shape the global financial landscape in an economy that contributes about a third of world growth.

He’ll need to keep an eye on inflation that’s forecast to accelerate this year and guard against the risk of a resurgence of destabilizing capital outflows. What’s more, he also must improve communication to global investors and the bond market while pushing for China to have a bigger role in global institutions such as the International Monetary Fund.

The new leadership comes at a time of heightened awareness of the risks facing the economy, from a broader trade-war with the U.S. to a long-feared financial blowup. Even without a negative shock, economists see the effects of the government’s campaign to rein in credit and slow the property market as taking an inevitable toll this year. Gross domestic product growth is seen slowing to 6.5 percent, according to estimates compiled by Bloomberg.

At a tricky time, Yi’s appointment represents stability, Hung Tran, executive managing director at the International Institute of Finance, said in an interview in Buenos Aires.

“The Chinese leadership in the past year or two began to focus on the need to slow down the growth of credit, particularly in the non-banking sector,” he said. Yi “has a very good understanding of the issues and has a forthright approach, and has an open mind discussing issues. I think that’s much appreciated.”