Before the ‘Battle of the Sexes,’ I Was Bested by Bobby Riggs 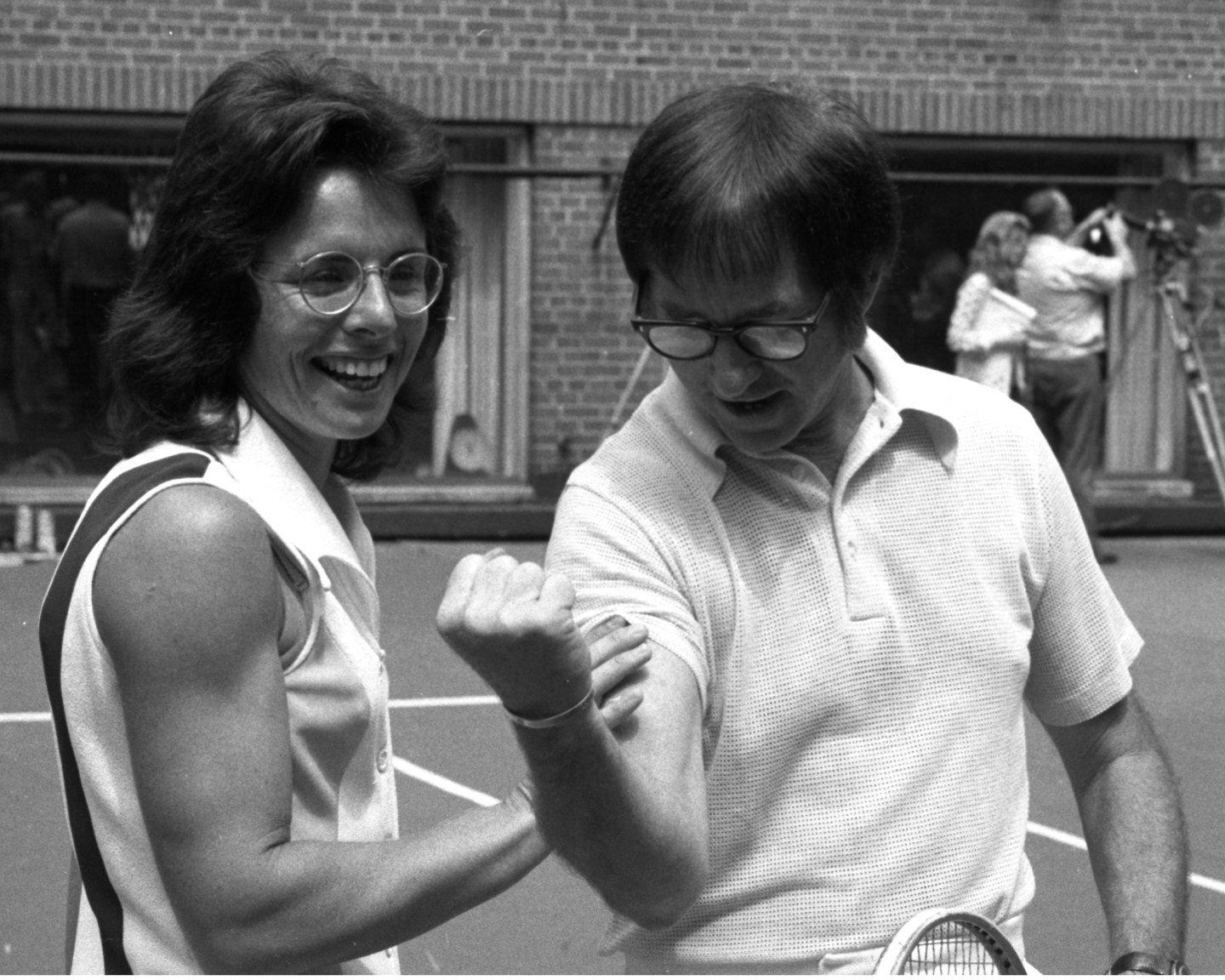 One summer after my freshman year at Princeton, back in the mainly wood racket days, I taught tennis on the university courts for our coach, an elderly, dapper gent named John Conroy. Late one afternoon as the last students departed, a short, slim fellow in tennis whites, advancing in duck-footed gait—he could have been a local banker ready for country club mixed doubles—appeared in the company of a theater-owner friend of mine from from Trenton. “Rapid Robert!” declared Conroy. Shaking the hand of this chipmunk-faced bundle of energy was like clasping an electrode. It was my introduction to Bobby Riggs.

The theatre impresario, a middle-aged showman named Edgar, brought his buddy Bobby specifically to challenge this then-18-year old, at the time a pretty good college player. Bobby tagged along because he loved to gamble, and immediately, coach Conroy, Edgar, and Bobby began throwing down bets on two-out-of-three sets of Riggs vs. Tully. I started strong, winning the first set by rushing the net. As the odds had shifted in my favor, Bobby paused while switching sides to double his bet on himself.

I knew that Riggs was renowned as the greatest lobber in tennis history, and in the second set, when I attacked the net, he lofted ball after ball just over my outstretched racket. Each lob appeared to be looping beyond the baseline, then landed smack on the line as if propelled court-ward by a sudden gust of air. The 49-year old Riggs didn’t generate much power on his own, but he never missed. He returned my swiftest groundstrokes hard by using my power against me, and mixed those faster-paced shots with deep floaters that were tough to attack, and broke up my rhythm.

After sweeping the last two sets, Bobby scooped up his winnings, and I got to spend a late afternoon in the company of the instantly lovable rogue who’s the “villain” now being played by Steve Carell in the new movie, “Battle of the Sexes.”

I haven’t yet seen the film, but the reviews claim that the script and Carell’s portrayal “humanize” Bobby beyond the caricature of the outrageous male chauvinist vanquished by Billie Jean King in the Houston travesty known as “The Battle of the Sexes.” The Riggs of legend sure needs, and from what I witnessed, deserves humanizing. But I also hope the film corrects the perception that Riggs’ greatest exploits on the courts was his previous win over the legendary Margaret Court in the heavily-hyped “Mother’s Day Massacre.” When I met Bobby, he was already revered in tennis circles for his fantastic record as both an amateur and a pro. He won the men’s singles title at the U.S. Championships in 1939 and 1941, and triumphed at the final Wimbledon before World War II, bragging that he’d bet on himself to win the triple crown of singles, men’s and mixed doubles, and captured them all, practically bankrupting the London bookmakers.

After the war, he’d defeated the greatest champion of the day, Don Budge, widely regarded as invincible, on a national tour. He also won the U.S. professional title three times. His reign as world champion ended in 1948, when he lost a tour to another all-time great, Jack Kramer. In Ellsworth Vines’ “Tennis” from the 1970s, one of the best books ever written on the sport, the former champion rates Riggs as the sixth best player in tennis history, besting the likes of Ken Rosewell and Tony Trabert. Vines lauds Riggs as “a classic stylist who did everything right.”

As we toweled off at the Princeton courts, I told Bobby that I’d played as a kid with one of his old foes, Gil Hunt, by then a renowned mathematician at the university. “He beat me one year at the U.S. championships,” said Bobby. “He outsmarted me by hitting all my serves into the net on my service games, and then serving bullets when he served, so I never got warmed up. Then he’s go all out on one of my service games, and win the set.”

Edgar, Bobby, and I then walked into town for a refreshments, and it quickly became clear that Bobby lived to gamble. He wanted to wager on who could come closest to guessing the price of the suits in the window of a fancy clothing store, the Princeton landmark Langrock. Edgar was still aching from his losses betting on me, and I was a nearly-broke teenager, so we declined. At the restaurant, Bobby was joined by his then-wife, Priscilla Wheelan, the heiress whose family owned the prominent Wheelan drugstore chain in Greater New York. The latter-day chauvinist held hands with Priscilla while we all chatted; he apparently showed an egalitarian view of which sex should support the other, enjoying a sinecure job with his wife’s business and enjoying the good life on Priscilla’s estate on Long Island.

A year later, Bobby’s son John came for an interview at Princeton. We played tennis and I hosted him in my dorm. John wasn’t a tennis talent like Bobby, but he was a handsome fellow, a gentleman with perfect manners who idolized his father, and knew every detail of Bobby’s career. Another of his sons with Priscilla, James, would later die under tragic circumstances, dealing Bobby a devastating blow.

Despite that tragedy, Riggs persevered as a household name celebrity, enjoying mainstream fame matched by few if any tennis stars. He got there by doing more to promote tennis more than any other figure in the sport’s history through the Houston showdown with Billie Jean King. The women’s-lib-bashing Bobby Riggs was a showbiz act. The Bobby Riggs I met was irresistibly likable. Even if he won your Rolex on a bet, he’d probably swap it back to you for a beer. After Riggs was diagnosed with prostate cancer, he remarried Priscilla, who nursed him through his final illness.

For Riggs, whether it was winning Wimbledon, or thrashing a Princeton teenager on a bet, or challenging Billie Jean, life was a riotous game. Sure, he lost the match of his life to Billie Jean. But the big winner was the sport he loved.

Correction (Sept. 19, 2017): The original version of this article mistakenly said that “The Battle of the Sexes” match took place in Las Vegas. In fact, it was Houston.