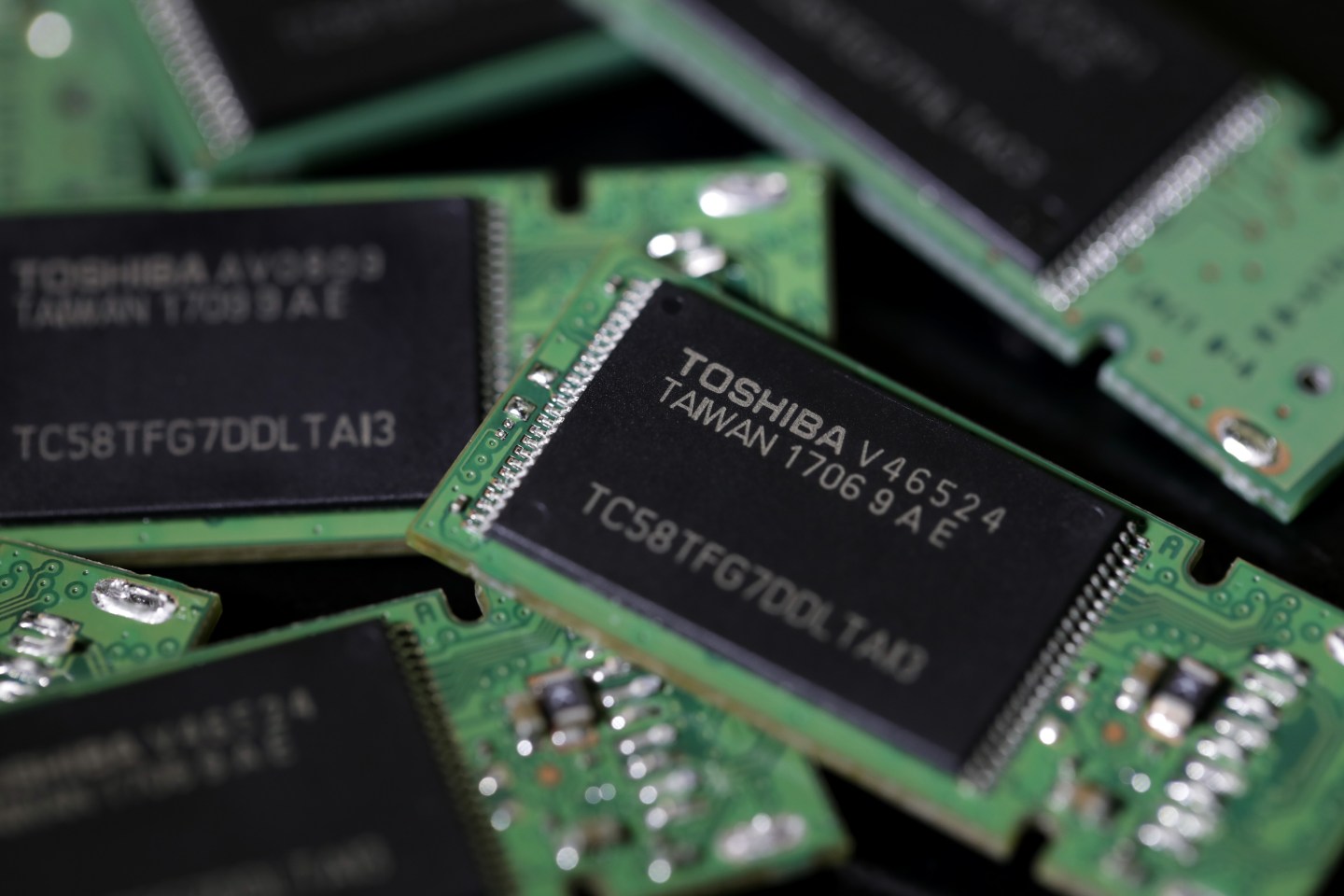 Toshiba Corp. memory chips are seen on memory modules in an arranged photograph in Tokyo, Japan, on Thursday, Aug. 17, 2017. Under pressure from its banks, Toshiba is racing to resolve several final disagreements with Western Digital Corp. before it can complete a deal to sell its chips business to the U.S. company and other investors by the end of August, according to people familiar with the matter. Photographer: Kiyoshi Ota/Bloomberg via Getty Images
Kiyoshi Ota—Bloomberg/Getty Images

Toshiba (TOSBF) failed to seal a deal to sell its prized chip business by a self-imposed deadline of Thursday, raising doubts about whether it can plug a balance sheet hole in time to avoid a delisting and keep the chips unit competitive.

The board of the embattled Japanese conglomerate met earlier in the day to review a $17 billion offer by a consortium led by Western Digital, as well as bids from groups led by Bain Capital and by Taiwan’s Foxconn.

Toshiba said in a statement it was continuing to talk with all three suitors and had not made any decision to reduce the pool of candidates.

“Toshiba intends to continue negotiations with possible bidders to reach a definitive agreement which meets Toshiba’s objectives at the earliest possible date,” it said.

Sources familiar the matter have said talks with Western Digital were in final stages but the two sides were struggling to come to an agreement over the U.S. company’s future stake in the business.

Complicating matters, Bain Capital resubmitted an offer, worth some $18 billion, at the last minute, bringing in Apple Inc to help bolster its bid, sources with direct knowledge of the matter said late on Wednesday.

The Japanese conglomerate has been trying to sell its prized memory chip unit for months, in an attempt to cover billions in of dollars in liabilities linked to U.S. nuclear arm Westinghouse.

A senior banking official familiar with the talks said Toshiba was still likely to sign a deal with the Western Digital group, as legal challenges from Western Digital, its joint venture partner for its chips business, made it difficult to accept other any other offer.

Failure to come to a deal soon could mean that Toshiba might not gain the necessary regulatory approvals by the end of the financial year in March.

Without that, it would have to report negative net worth for the second year running and face a potential delisting, a blow to shareholders and a likely hit for the group’s funding costs.

Frayed trust and wasted time may mean that both Toshiba and Western Digital, the world’s No. 2 and No. 3 NAND flash memory producers, would fall further behind industry leader Samsung Electronics, which is pouring billions of dollars into production upgrades to stay ahead.

“Western Digital and Toshiba really need each other because they can’t compete against Samsung without partners,” he added.