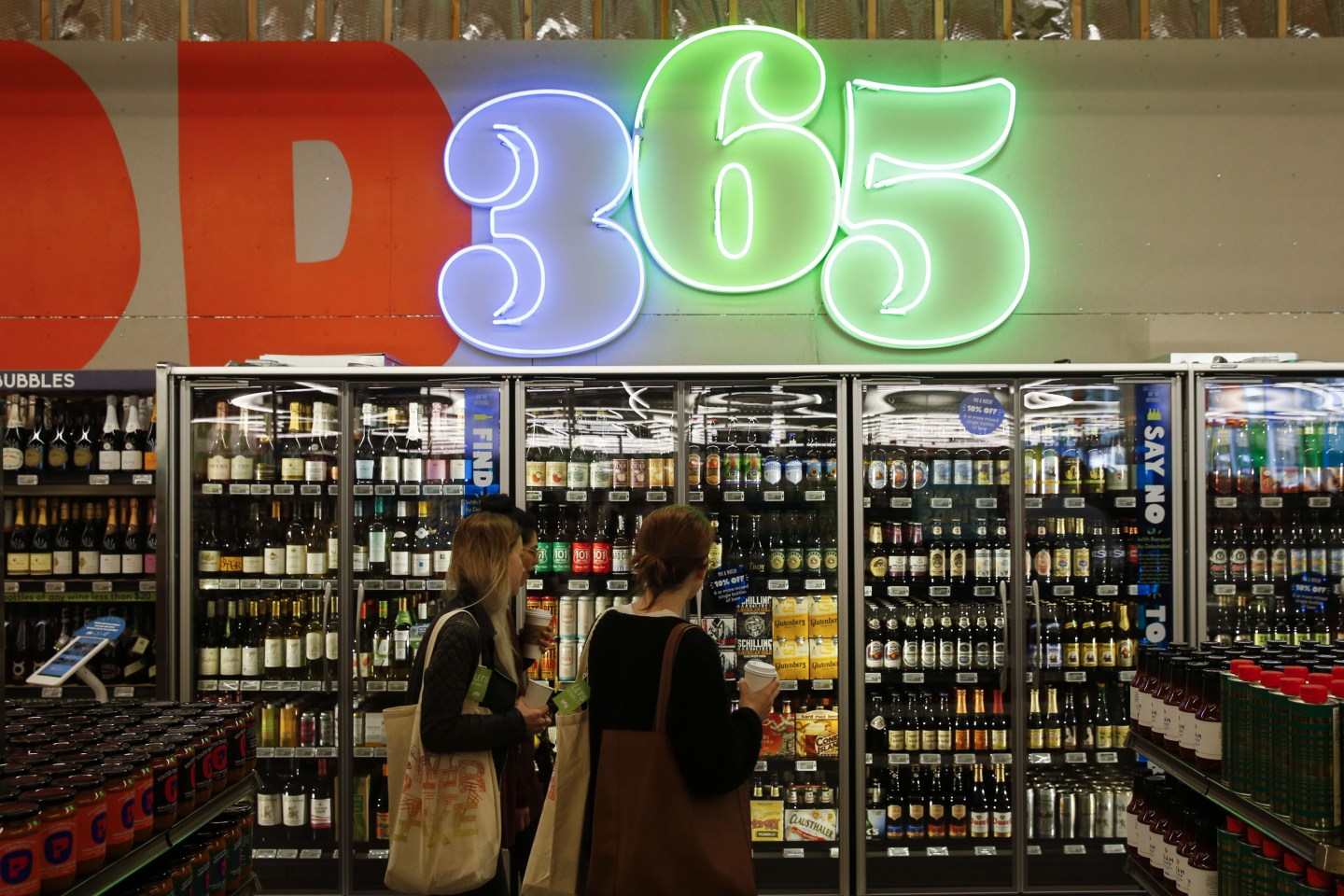 Customers browse the craft beer selection on the opening day of the 365 by Whole Foods Market store in the Silver Lake neighborhood of Los Angeles, California, U.S., on Wednesday, May 25, 2016. Whole Foods Market Inc., plans to open 10 of the grocery stores in 2017 with a focus on everyday low prices and convenience. Photographer: Patrick T. Fallon/Bloomberg via Getty Images
Photo by Bloomberg Bloomberg via Getty Images

2016 isn’t a year that the beverage alcohol industry will be toasting.

On Thursday, industry tracker IWSR reported that Americans consumed less alcohol in 2016 than the prior year, with volume slipping by 3.5 million nine-liter cases last year to 3.39 billion nine-liter cases. It was the first annual decline since 2011 and only the third year the category posted a drop over the past decade.

Weak demand for beer was almost entirely to blame for the decline. Volume for the domestic beer category dropped 1.5% in 2016 and would have been down a steeper 2.8% when excluding volume from the stronger-performing craft beer industry. As Fortune has reported, even craft has struggled due to Big Beer acquisitions and a crowded market that has dissuaded some potential customers that perhaps see too many options on retail shelves. One bright spot within the ailing world of beer: Mexican imports grew by 6%, IWSR reports. Mexican-produced beers like Corona, Tecate, and Dos Equis have all performed strongly in recent years.

Some Wall Street analysts have speculated that the beverage alcohol industry—especially the beer category—has faced a new competitive threat as a result of the legalization of recreational cannabis in a handful of U.S. states including Colorado and Washington. Observers like Cowen & Co. analyst Vivien Azer say domestic beer producers like Molson Coors (TAP-A) and Anheuser-Busch InBev (BUD), which makes high-volume brands like Miller Lite and Bud Light respectively, would be especially hurt by this trend. Executives haven’t yet said marijuana is a competitive threat, though the IWSR figures indicate it may be a trend to keep an eye on.

More broadly, beverage alcohol companies will need to confront changes in how Americans socialize when they do opt to drink alcohol. Thousands of neighborhood bars have closed in recent years, perhaps because more adults are spending time Netflix and chilling and less time (and money) at a local watering hole. IWSR reports that on-premise (i.e. volumes at restaurants, bars and hotels) volume dropped slightly last year, while off-premise sales picked up.

Because the roughly $108 billion beer category is so massive, a decline for that business couldn’t be fully offset by growth in other subcategories. Still, wine volume grew by 1.1% last year as sales improved for pinot noir, rose, and cabernet sauvignon. “Premium” priced wines that generally go for around $10 or more have been selling strongly, a trend that bodes well for big producers like E&J Gallo Winery, The Wine Group, and Constellation Brands (STZ-B).

Within the distilled spirits category, bourbon whiskey (up 6.4%) and tequila (7.4% growth) were some of the strongest performers. For bourbon, the growth was led by a trio of offerings from Beam Suntory—Jim Beam, Maker’s Mark, and Knob Creek—as well as Diageo’s (DEO) Bulleit. Canadian whisky grew 2.4%, driven by Diageo’s Crown Royal and Sazerac‘s Fireball. A pair of upstarts boosted vodka by 2.3%: the domestic-made Tito’s and New Amsterdam. Irish whiskey, brandy/cognac, and gin all grew, while rum slightly declined.

The spirits industry has stolen market share from beer producers for seven straight years, industry advocate Distilled Spirits Council reported earlier this year. Spirits makers have had success launching a ton of new flavorful products like honey and cinnamon flavored whiskeys, as well as higher-priced tequilas, which have all won over consumers. The cocktail scene has also enjoyed a much-needed renaissance, helping those trendy establishments flourish at a time when more downmarket bars have shuttered their doors.