For Trump in White House, Conflicts of Interest Range Widely 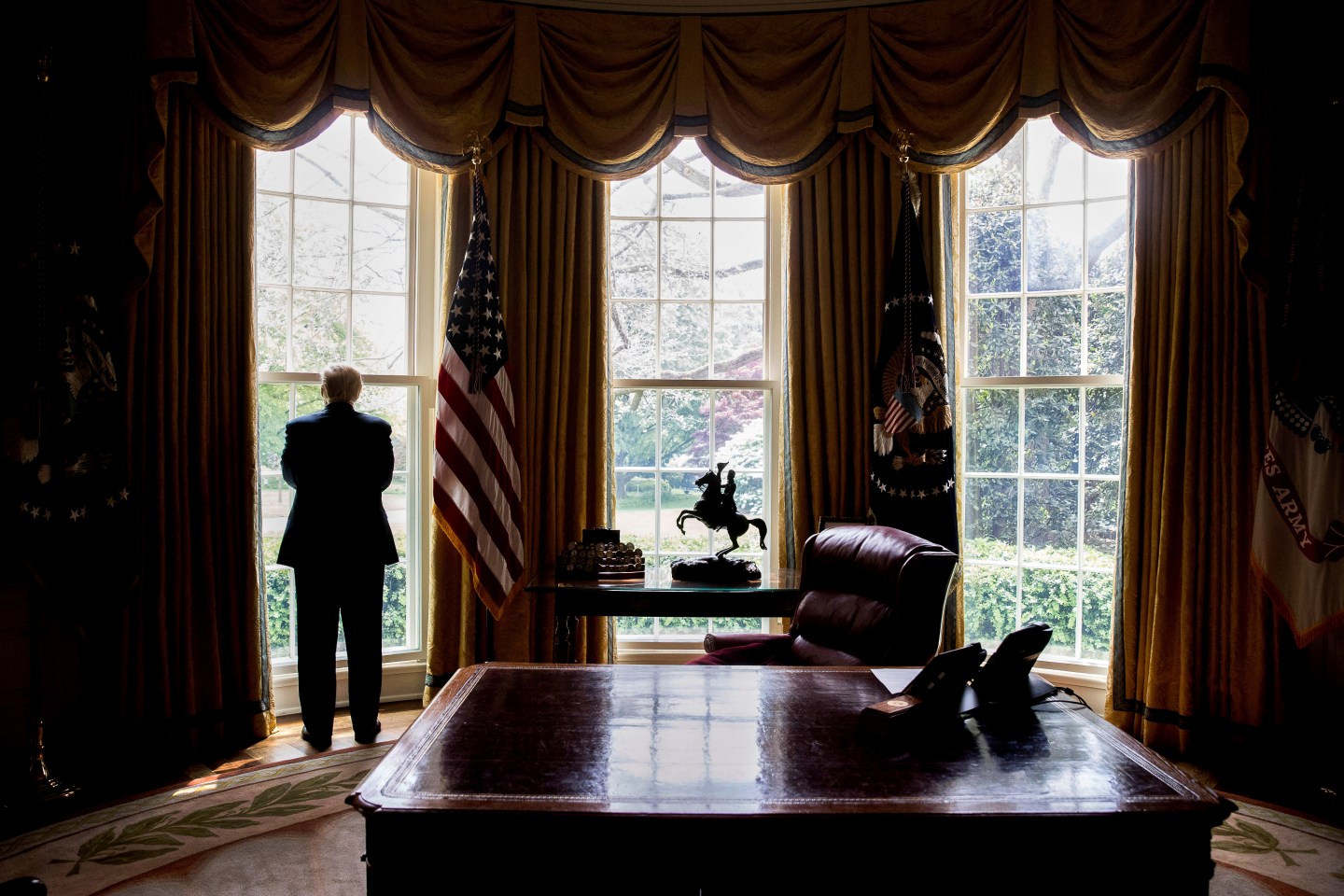 In this photo taken April 21, 2017, President Donald Trump looks out an Oval Office window at the White House in Washington following an interview with The Associated Press. Health care is complicated. China can be a useful ally. NATO is not obsolete. Being president is hard. Over the course of his 100 days in office, President Donald Trump has been startlingly candid about his public education in the ways of Washington and the world. (AP Photo/Andrew Harnik)
Andrew Harnik AP

When it comes to avoiding conflicts of interest in the White House, President Donald Trump has ripped up the playbook in his first 100 days.

Most presidents have taken pains to avoid even any appearance that they might be exploiting their office for personal financial gain. Trump doesn’t seem too worried.

His company has doubled membership fees at his Palm Beach club, whose popularity has benefited from press coverage of his meetings there with political leaders.

The Trump Organization, now under the leadership of his sons Don Jr. and Eric Trump, has proceeded with overseas resort projects, thereby handing foreign governments potential leverage to influence the president. Trump has boasted of the charms of his new luxurious Washington hotel despite the impropriety of having diplomats bent on advancing their countries’ interests spend money there.

Asked about a lawsuit filed by a watchdog group accusing him of profiting off the presidency, Trump was dismissive: “Totally without merit.”

Trump Chief of Staff on Changing Libel Laws; ‘That’s Something We’ve Looked At’

Before taking office Trump did announce some steps to limit personal conflicts for himself or his family. He vowed that his company would strike no new deals abroad, subject deals in the United States to review by an ethics lawyer and cede management control of operations to Don Jr. and Eric.

But given his sprawling worldwide holdings, no one expects the financial ethics questions for the 45th president to end soon.

The latest flare-up involves the tax-cut plan his administration announced Wednesday. Critics denounced it as a brazen giveaway to Trump and his family. The proposal would eliminate the estate tax, repeal the alternative minimum tax that affects some affluent people, deeply slash corporate rates, reduce investment taxes and allow “pass-through” firms to qualify for a much lower rate — all of which could benefit Trump, his family or his businesses.

The White House has argued that its tax-cut plan would help lower and middle class families, too, and speed economic growth.

Below is a rundown of some conflicts in the first 100 days of his presidency.

Since Trump became president, he has spent about half his weekends at his Mar-a-Lago resort in Palm Beach, where he has hosted the prime minister of Japan and the president of China. Since inauguration, he has doubled membership fees to join the club to $200,000.

What Trump Still Doesn’t Get After 100 Days in Office

Presidents have invited political leaders to their properties before, of course. Franklin D. Roosevelt brought dignitaries to his Hyde Park estate near New York City. But FDR wasn’t running the property as a business and making money off it.

THE D.C. HOTEL AND A NEW CHAIN

To limit foreign influence over his policies, Trump said he wouldn’t strike any new business deals abroad. But governments have many other ways to curry favor with him.

Exhibit A: The Trump International Hotel near the White House, where diplomats like to stay and the embassies of Bahrain and Azerbaijan recently threw parties, according to a lawsuit filed by Citizens for Responsibility and Ethics in Washington. The watchdog group argues that the president is violating a clause in the U.S. Constitution barring him from accepting payments from foreign governments without Congress’ consent.

A lawyer for the president says diplomats are just paying their hotel bills — a “fair value” exchange not barred by the Constitution. And Trump has promised to donate any profits from foreign governments that use his hotels to the U.S. Treasury.

Plans by the Trump Organization to open lower-priced hotels in the United States using money from outside investors are also worrying ethics groups. They warn that investors might use their participation in a hotel rollout as a way to buy influence in Washington.

The issue flared after media reports in March that a Texas developer wanted to use money from unnamed investors in Qatar, Kazakhstan and Turkey to build one of the hotels in Dallas. The Trump Organization recently canceled talks with the developer.

The Trump Organization hopes to open as many as 100 of these hotels, called Scion, in three years.

Since his election, the president has been granted preliminary approval for 38 trademarks in China for hotels and golf clubs and others businesses there. In the past, his company has sometimes struggled to secure such valuable monopoly naming rights. Suspicions have arisen that Beijing is giving Trump’s company favored treatment now that its owner sits in the Oval Office.

In its lawsuit, Citizens for Responsibility and Ethics in Washington argues that the trademark approvals violate the U.S. Constitution. China says it handles all trademark applications “in accordance with the law and regulation.”

Ivanka Trump is receiving good news from China, too. Since the inauguration, the president’s daughter and West Wing adviser has received preliminary approval for five trademarks in China. Three of them were greenlighted the same day that she and her husband, Jared Kushner, a senior adviser to the president, sat beside President Xi Jinping and his wife for a lavish dinner at Mar-a-Lago.

The trademarks grant her monopoly rights to use her name for jewelry, bags and spa services. Public records show that her company has more than 180 pending and registered trademarks around the world.

Ivanka Trump’s company says all 2017 Chinese trademarks were filed not with the intention of setting up businesses but to prevent counterfeiters or squatters from using her name. The first daughter has pledged to recuse herself from issues that pose conflicts while her father is president.

Sales and shipping data suggest that her business has boomed in recent months, especially in February. That was the month when Kellyanne Conway, a senior White House aide, suggested that Fox News viewers “Go buy Ivanka stuff.”

The number of Ivanka-branded items sold through Lyst, an e-commerce platform, spiked 771 percent in February from the same month a year ago.

As a federal employee, Conway is barred by ethics rules from using her office to promote a business or product.

White House ties appear to be hurting the Kushner family real estate business, not helping it, at least at one important property.

Its struggling flagship skyscraper at 666 Fifth Avenue needs an infusion of hundreds of millions of dollars, and a giant Chinese company was negotiating earlier this year with the Kushner family to provide the money. But then media reports highlighted the Chinese company’s ties to the ruling Communist Party and how its investment could give Beijing leverage on some issues with the White House. Negotiations were called off in March.

To comply with ethics rules, Jared Kushner has sold his stake in the Fifth Avenue building and some other assets to relatives. He still holds a financial interest in hundreds of entities, though. And it’s unclear who the lenders and partners in many of the entities are and who might benefit from policies that Kushner could affect now.