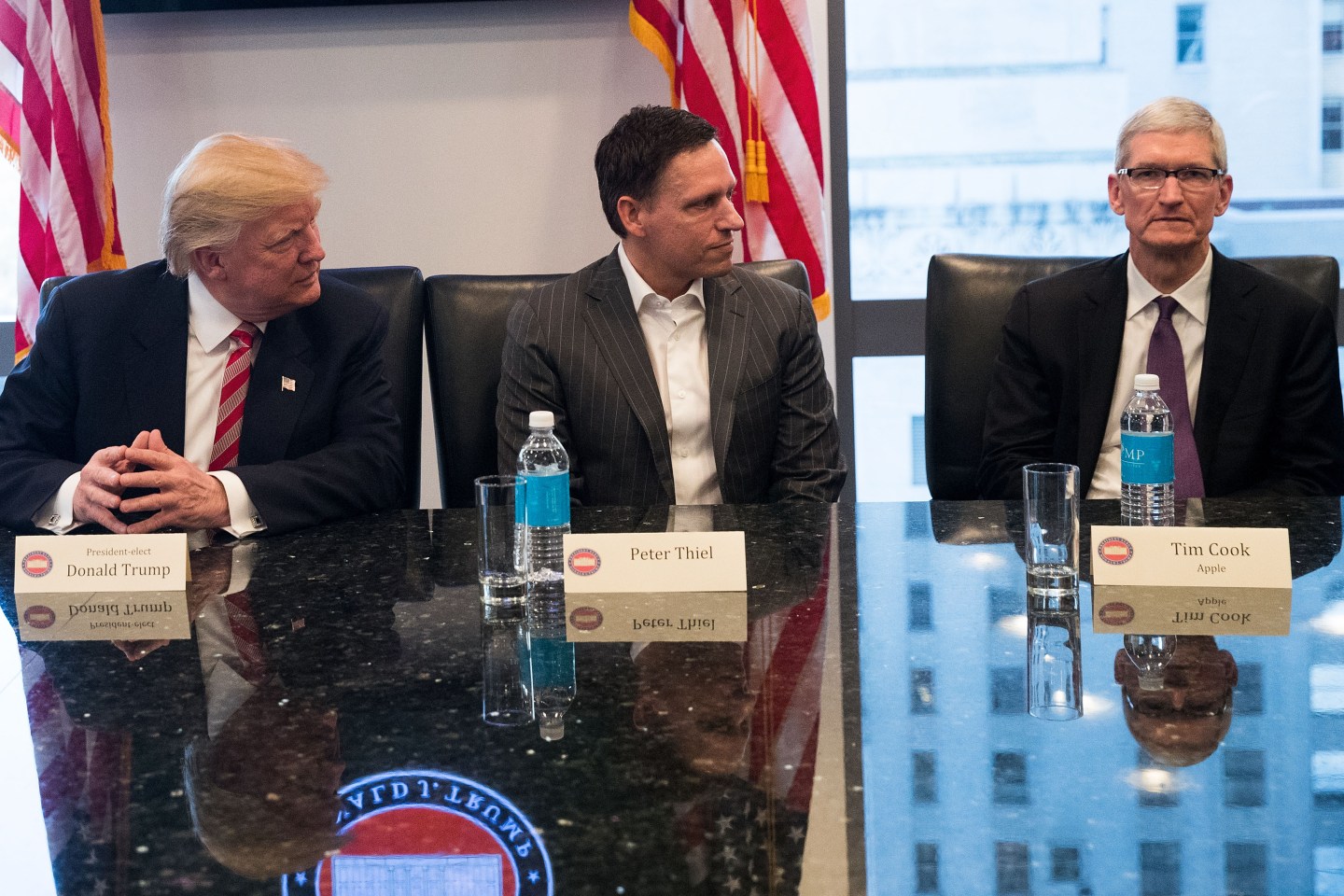 The fate of Apple stock under President Trump was once considered something of a wild card. Apple CEO Tim Cook, after all, has clashed with Trump on everything from iPhone encryption to immigration, and was even reportedly on an early short list of potential running mates for Hillary Clinton.

But as Trump’s first 100 days come to a close, one thing is clear: Apple stock is the biggest winner of his presidency so far. Apple (AAPL) shares have returned more than 20% since Trump entered the White House, making the tech company the best-performing stock in the Dow Jones industrial average during the first 100 days.

Driving Apple’s gains: a great quarterly earnings report, a tax climate that could be a boon for Apple shareholders, and the stock’s growing reputation as a haven for dividend-conscious retirement investors.

Apple stock has run up about four times as much as the market overall, even as the so-called Trump Bump created one of the best 100-day rallies for any president elected since World War II. Since Trump was elected in November, Apple has risen 29%, eclipsing the Dow’s 14% return over that period—though Boeing (BA) just barely scraped ahead, with its shares up nearly 30%.

Even though Apple shares sank after Trump announced an immigration ban from several predominantly Muslim countries in late January, the tech company reversed those losses the following day when it revealed in its earnings report that its new iPhone 7 was a hit, and that it sold more iPhones over the holiday season than Wall Street had expected.

Trump’s proposed policies, though still in flux, have also been a boon to Apple, whose CEO Cook has participated in the President’s summits of business leaders. Most notably, Apple would be one of the biggest beneficiaries of Trump’s promise to cut the corporate tax rate to 15%, which would allow the iPhone maker to potentially bring much of its massive overseas cash hoard back to the U.S. without taking a major hit from taxes. (On the flip side, Trump’s tax reform plan has hurt other stocks like Under Armour (UAA), which was the market’s worst performer in the first 100 days, in part due to fears that the President’s suggested import tax could more than cancel out benefits of a rate cut.)

Still, a flush few months for Apple’s stock haven’t stopped Cook from openly disagreeing with Trump’s agenda, even going so far as to threaten to sue the administration over its immigration ban.

It’s not just Trump who has given Apple a boost in the last few months. Warren Buffett has been taking bigger and bigger bites of Apple stock lately, a bet that has paid off for the legendary Berkshire Hathaway (BRK-A) investor in the form of profits in the range of hundreds of millions of dollars—and helped send Apple shares to new all-time highs.

The octogenarian stock-picker, after all, has long loved dividend stocks, and Apple’s 1.6% dividend yield (relatively high for a tech stock) has made it increasingly popular with yield-seeking investors, especially those planning for retirement.

If tax reform, the Trump Bump and the next iPhone continue pushing the stock higher, retirees who bet their entire nest egg on Apple stock might not seem so crazy after all.