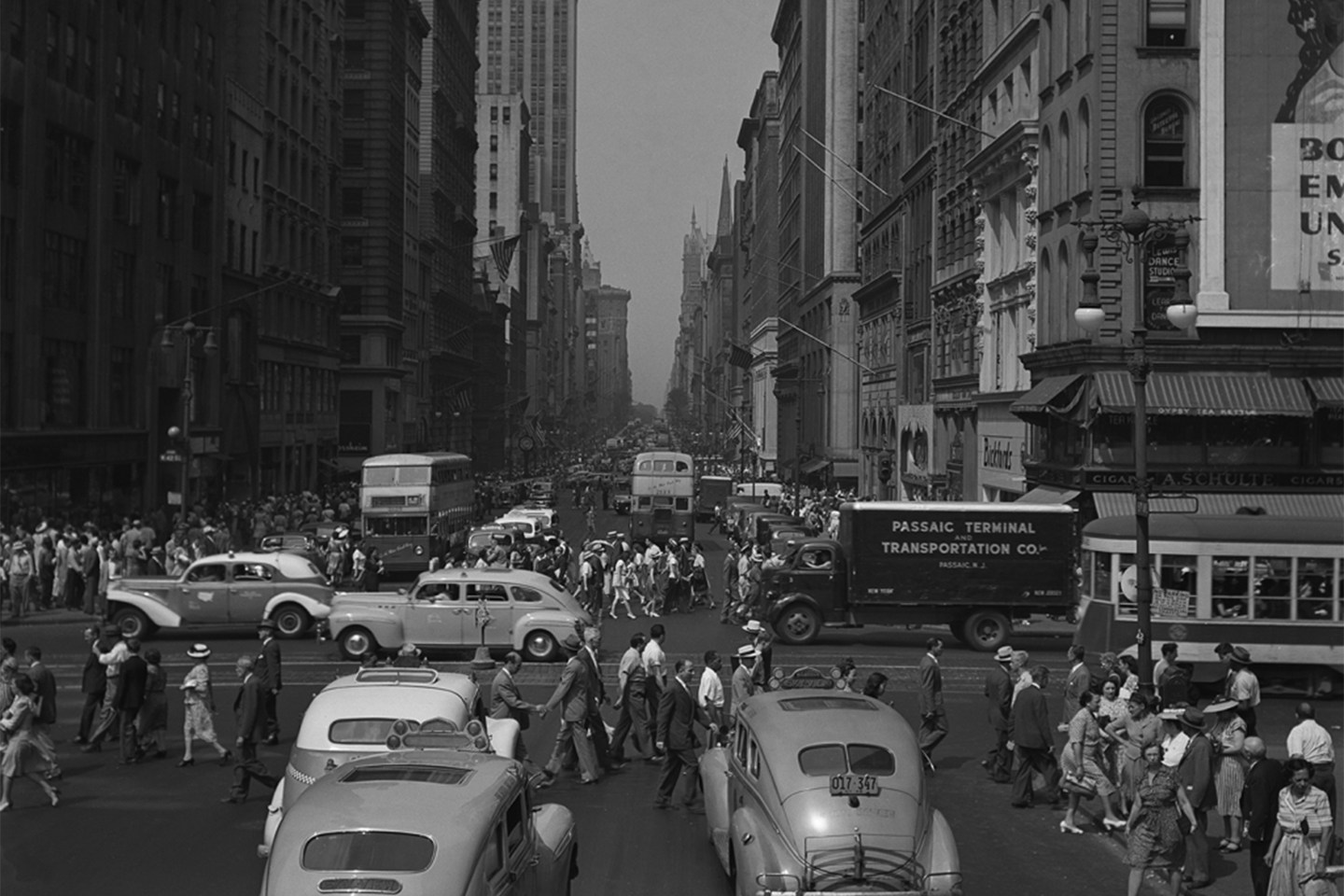 “I am just a simple guy who would rather photograph than eat.”
— Todd Webb

Todd Webb was a Michigan-born photographer who spent his life photographing everyday existence in New York, the American Southwest, and Paris. Though not as well-known as some of his contemporaries, he has been compared to photographers like Berenice Abbott, Eugene Atget, and Walker Evans, the famed chronicler of Depression-era rural America.

By his own admission, Webb tried to avoid photographing anything that was too “Walker Evans-ish,” and a new exhibition of his work showcases work from the urban side of his portfolio, including memorable photos he took for Fortune magazine. Bill Shapiro, former LIFE magazine editor-in-chief, has curated an exhibition entitled Down Any Street: Todd Webb’s NYC Photographs 1946-1960; it opens April 20 at The Curator Gallery in New York’s Chelsea district. Selections from the show can be seen in the photo gallery at the top of this article.

According to Shapiro and others who know his work, Webb’s name recognition never matched his talent. “Part of the reason is, he cares so much about making beautiful pictures, and he’s less caught up in assignments and fame, his own name,” Shapiro told Fortune. “It’s a cliché, but Todd Webb was really about photography.”

Webb came onto the scene during a golden age of photography, in the late 1930s and early ’40s, alongside artists like Margaret Bourke-White, Ansel Adams, Henri Cartier-Bresson, Dorothea Lange, and Gordon Parks, to name just a few. After being discharged from the military, Webb moved to New York, where he met and became friends with the renowned photographer Alfred Stieglitz, and his wife, the painter Georgia O’Keeffe. He also befriended other well-known photographers of the time, like Harry Callahan, Berenice Abbott, and Lisette Model. “The names that run through his life are quite unbelievable,” said Shapiro. “And he, in some ways, is sort of the forgotten name.”

In 1946, Webb started a journal to record his experiences. In it, he documented the most promising and productive year of his career. Before Stieglitz’s death that year, he was able to introduce Webb to Beaumont Newhall, head of the photography department at The Museum of Modern Art in New York. Newhall set up Webb the same year with his first solo exhibition, at the Museum of the City of New York, entitled I See a City.

A chance encounter with Fortune

This led to a Fortune researcher discovering Webb’s work at the museum. Deborah Calkins, then the coordinator for Fortune’s art department, asked Webb if he would like to photograph for a story being written by George Hunt about New York’s traffic jams. This was the first time Webb had ever worked for a big magazine. He stated in his journal:

“I was terrified when they asked me what my fee would be as I had never had a job like that. Mrs. Calkins saw that I was at a loss to answer so she said they were thinking of fifty dollars a day or by space used, whichever was greater. I almost collapsed.”

Webb worked for fifteen days trying to get the best shot. He would hang out the window of a building, stand on the roof of a truck, anything to get above the scene. “He did a great job of showing people in architectural environments,” said Shapiro. While Webb enjoyed the assignment, he did feel a huge amount of pressure. He was poor and needed the money ($50 in 1946 was the equivalent of about $500 today), and he earned $1,375 for his work on the New York traffic scene. But for him, commercial assignments weren’t as satisfying as his first love, black and white photography, and his personal work.

In a journal entry, Webb recalls being reminded by a friend to forget story angles and just focus on photographing his way. “Life goes on about me,” he writes, “and I am a living breathing part of it. I feel things, the people, the buildings, the streets, and I have something to say about them and my medium is photography.”

Webb really took joy in his work: He shot people and architecture in a poetic way and he captured the power of the scene he was shooting. “In spite of being quite broke I am in good spirits,” he wrote. “My photography is alive. In it I find joy without measure. It grows continually and with it I’ve grown poorer and richer.”

Webb went on to be an occasional contributor to Fortune, photographing the housing mess in Buffalo, and taking aerial shots of New York City from the 49th floor of the Empire State Building. He also took jobs with other publications and had photos shown at the Museum of Modern Art. Notably, he also worked with Roy Stryker and the Standard Oil Company. Stryker was known for his time with the Farm Security Administration, where he launched the photo documentary program during the Great Depression. He was hired by Standard Oil to organize a documentation project to show the public what the oil industry was really like. When selecting photographers for this project, he sought out those that had “insatiable curiosity, the kind that can get to the core of an assignment, the kind that can comprehend what a truck driver, or a farmer, or a driller or a housewife thinks and feels and translate those thoughts and feelings into pictures that can be similarly comprehended by anyone.”

Working with Stryker, Webb and photographers like Esther Bubley, Sol Libsohn, Gordon Parks, Elliott Erwitt, and others were given job assignments all over the U.S. and the world. Fortune used one of Webb’s night shots of a refinery on the front of its October 1951 issue: It was one of the first color photographs to be used on Fortune’s cover.

Webb later moved to Paris, where he met his wife, and after a few years there they moved back to New York. He was awarded a John Simon Guggenheim fellowship in 1955. Using that funding, he walked from New York to California, documenting the trails that early 1849 Gold Rush pioneers used. He produced around 7,500 photographs during his five months on the road.

During that same year, Swiss photographer and Fortune contributor Robert Frank was also awarded a Guggenheim. Frank set off driving across U.S. on a tour that resulted in the book “The Americans” in 1958. The photos in that book showed post-war America through a darker sensibility that challenged the way most Americans saw the country. It was highly influential in the photo documentary world and has been an inspiration for countless photographers even today—and helps explain why Frank is far better known that Webb. “Robert Frank exploded and Todd Webb made beautiful work,” said Shapiro.

Webb later moved to New Mexico, where he and other photographers took portraits of O’Keeffe that showed her in a more personal setting. Some of Webb’s photographs of her can currently be seen at the Brooklyn Museum’s Georgia O’Keeffe exhibition, along with images by Stieglitz, Ansel Adams, Annie Leibovitz, Yousuf Karsh, and Andy Warhol. Webb later retired in Portland, Maine where he spent the rest of his life; he died in 2000 at the age of 94. “It’s hard to become famous in some of those places,” said Shapiro.

To offer insight into his work, Shapiro plans to print out excerpts of Webb’s journal for guests to read while they walk around the gallery looking at his pictures. “I want people to feel that they have discovered a photographer that they haven’t heard of before,” said Shapiro. “Hopefully they walk away with a little bit of that sweetness and optimism that Todd Webb sought to capture.”

The gallery show runs from April 20- May 20. On the same day, the Museum of the City of New York will open its second solo exhibition of Webb’s work, entitled A City Seen: Todd Webb’s Postwar New York, 1945-1960; that show will run till September 4. The exhibition will feature vintage prints and excerpts from Webb’s journal.