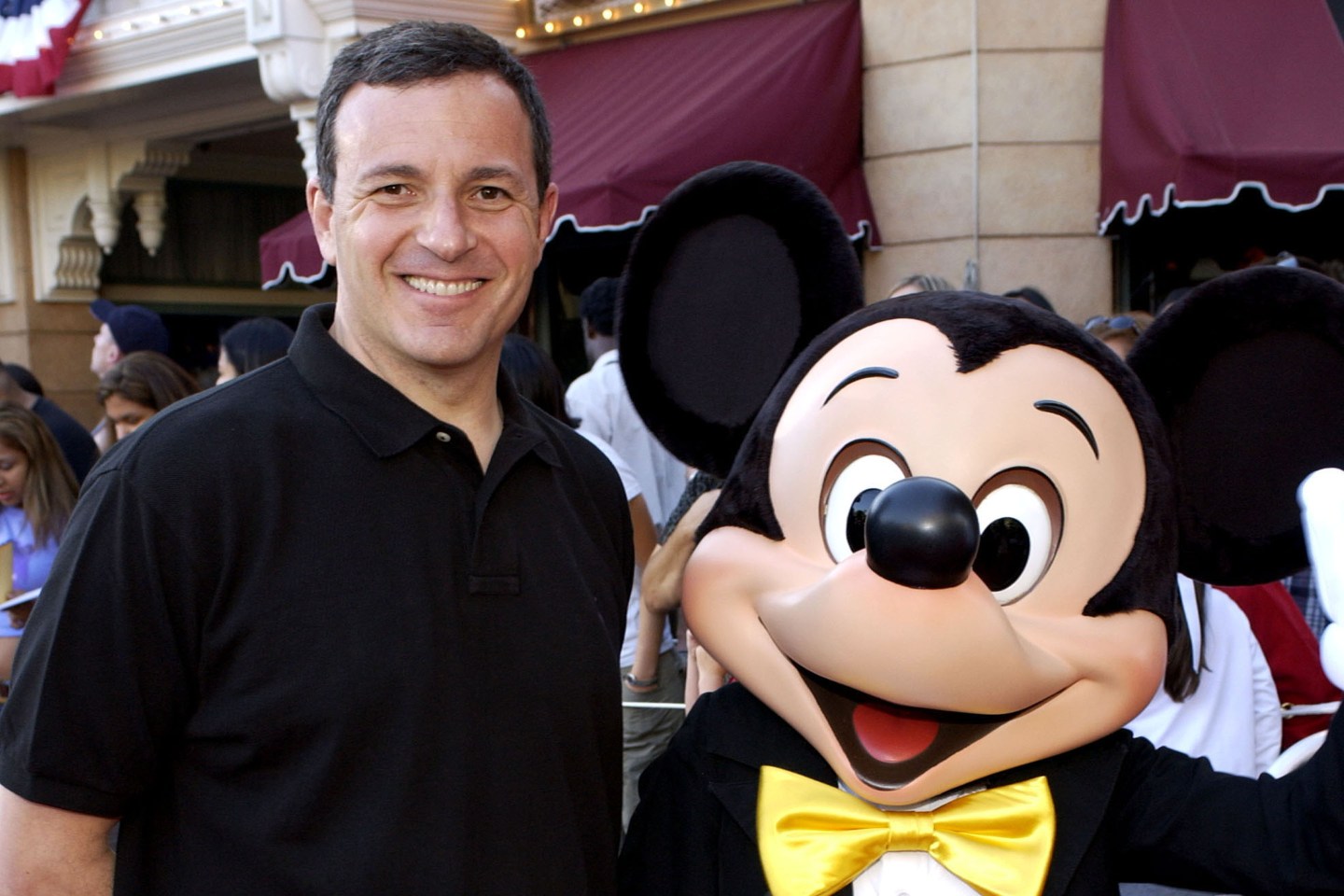 Robert Iger during The World Premiere of "Pirates of The Caribbean: The Curse of The Black Pearl" -Red Carpet at Disneyland in Anaheim, California, United States. (Photo by L. Cohen/WireImage)
L. Cohen—WireImage/Getty Images

They sit on top of the business world today, but many prominent CEOs started at the bottom. Good old-fashioned hard work and an unstoppable desire to succeed helped them rise through the ranks from entry-level employee to head honcho.

Navigating your own ascent up the ladder might feel long and discouraging at times, but you can do it. Take a look at these 15 CEOs’ first jobs, and get inspired to climb the career ladder.

He’s ruled The Walt Disney Company as its chairman and CEO since 2005, but Bob Iger’s introduction to the company wasn’t nearly as glamorous. He graduated from Ithaca College in 1973 and promptly went to work as a weatherman for a local news station.

A few months later, he landed a job in New York City as a studio facility supervisor for ABC — Disney bought the network in 1996 — and the rest is history. His integrity, humble nature and genuine appreciation for creative talent helped him get to where he is today, according to a 2016 Variety article.

In 1980, Ursula Burns landed an internship at Xerox. And by 2009, she was the CEO. She held this role until 2016, when Xerox split into two separate companies. Burns is currently chairman of the board of the document technology company, but she’ll retire in May 2017.

Originally an engineer, her career took a pivotal turn when she accepted a job as executive assistant to the then-president of marketing — a developmental role for high-performers. Burns called this a “risky job” in a 2013 interview with Bloomberg, because her engineering skills weren’t needed. Despite the gamble, this bold move clearly paid off.

Paula Marshall has been the CEO of baked goods company Bama Companies — her family business — since 1984. Immersed in the company from a young age, her first official role as an employee was a production line job as a teenager.

For the next 12 years, she held various jobs in the company, until her father retired and named her CEO. At the time, it was less common for a woman to take the reins of a company, but Marshall stepped up and has since led the company to impressive growth. Use Marshall as an example, and don’t let doubters hold you back.

After graduating from the University of Illinois in 1960, Jack Welsh Jr. landed a job as a chemical engineer in the Plastics division of General Electric. He worked his way up to chairman and CEO in 1981 and remained top dog until 2001. In a 2015 LinkedIn post, Welch said doing two things all the time will lead to personal growth in an existing company.

“The first is over-delivering on results within the values criteria that your boss sets for the team,” he said. “…The other quality that makes you promotable is constantly working to make your boss smarter.”

When she was 18 years old, Mary T. Barra joined General Motors as a co-op student in the Pontiac Motor Division. After 34 years with the company, she landed the role of CEO in 2014 — and chairman in 2016 — becoming the first woman to helm a major car corporation. Barra spoke candidly about her career in a 2016 interview with Esquire.

“The people looking over their shoulder and wondering about their next job are the least successful,” she said. “There’s no decision you should ever make that would embarrass you if it became public.”

Some CEOs’ first jobs turn into powerful careers more often than you might realize. Doug McMillon, president and CEO of Wal-Mart Stores, has been leading the retail giant since 2014. This is especially impressive since his first job with the company was an hourly gig loading trucks at a distribution center during his teenage years.

The youngest-ever CEO to fill Sam Walton’s shoes, McMillon has held various roles with the company, including assistant store manager and a buyer trainee. Eventually, he went on to hold senior management roles in every Wal-Mart business segment, making himself invaluable.

In 1975, Doug Oberhelman landed a job in the Caterpillar treasury department, with the goal of paying off his car and student loans. In a 2013 interview with Leaders magazine, he said if someone would’ve told him he’d become the company’s chairman and CEO in 2010, he would’ve thought they were crazy.

A genuine passion for the work kept him with the company for 41 years, until he stepped down as CEO at the end of 2016. Oberhelman remained executive chairman through March 31, 2017.

Becoming U.S. Secretary of State meant Rex Tillerson had to change employers for the first time in more than 40 years. Chairman and CEO of Exxon Mobil Corporation since 2006, he joined the oil and gas company as a production engineer in 1975.

Prior to commandeering the boardroom, Tillerson developed his leadership skills by holding several senior roles in the company. If you have sky-high career ambitions, holding various roles throughout the company will allow you to develop a well-rounded knowledge of company operations.

Intel CEO Brian M. Krzanich joined the company as a process engineer in 1982, but he made an error 25 years ago that almost got him fired. In a 2017 interview with the Fortt Knox podcast, Krzanich explained what he did.

“I wiped out the output of an entire factory for a week,” he said. “I’m lucky to be employed at Intel, sometimes I say.”

Rather than letting the mistake take him down, Krzanich used the situation to change the company for the better, etching out his legacy. He was appointed CEO and elected to Intel’s board in May 2013.

In 2012, Jim Skinner stepped down as McDonald’s CEO and vice chairman, but his 41 years with the company weren’t all so prestigious. Following a 10-year stint in the Navy, he landed a job as a manager trainee in 1971.

Even CEO first jobs aren’t always amazing, but you have to start somewhere, Skinner said in a 2012 interview with the Quad-City Times.

“You must be willing to go to work,” he said. “In that job, you must add value to that company and gain experience and be committed to the brand. You do the best you can to grow that brand.”

She was born into the family business, but Abigail Johnson — Fidelity chairman and CEO, and one of the richest women in the world — worked her way to the top. Although she’s the third generation to lead the financial services firm, Johnson wasn’t handed her leadership role.

Her tenure with Fidelity started in high school, when she spent a summer answering customer service calls. She eventually returned to Fidelity in 1988 as an analyst, but she quickly transitioned into a portfolio management role. Over the years, she got to know the company by working in most of its main areas, which prepared her to take over for her father as CEO in 2014.

Justin Copie joined technology company Innovative Solutions as a co-op student while attending the Rochester Institute of Technology. After 13 years with the firm, he took on the role of owner and CEO.

Prior to the transition, he spent five years being groomed by former owner and CEO Bob Titus. His thirst for knowledge is likely what led him to the top.

“I always want to progress,” Copie said in an article on the company website. “I always want to move forward… I’m still learning and I’m always seeking more information and trying to figure out what fits (and) what doesn’t…”

Not all first jobs evolve into company leadership, but Karen Kaplan’s did. Now the CEO of Hill Holliday, a prominent advertising and communications agency, she originally joined the company as a receptionist to earn money for law school. Instead of doing the minimum to get by, she put 100 percent effort into the role, which skyrocketed her career.

“I was going to be the best damned receptionist in history and that’s how I approached the job,” she said in a 2014 interview with Fortune. “I took it really seriously. I didn’t just bide my time out there.”

In 1973, Samuel Palmisano landed a sales job at IBM and, 30 years later, he became chairman, president and CEO. He reigned from January 2003 until December 2011.

Palmisano cited “phenomenal resilience” as the key to a successful career in a 2015 interview with The Washington Post. Beyond that, he emphasized the importance of forming good business relationships.

He’s the chairman and CEO of Johnson & Johnson, but in 1988, Alex Gorsky started his career as a sales representative for Janssen Pharmaceutica — a Johnson & Johnson subsidiary. He spent years in various sales, marketing and management roles. This, paired with his West Point education and six years in the U.S. Army, helped him develop leadership skills that took him to the top.

“People are not looking for a perfect leader,” Gorsky said in a 2014 interview published on Knowledge at Wharton. “They want a leader who cares about them and is going to help them try to be better.”

This article originally appeared on GoBankingRates.com