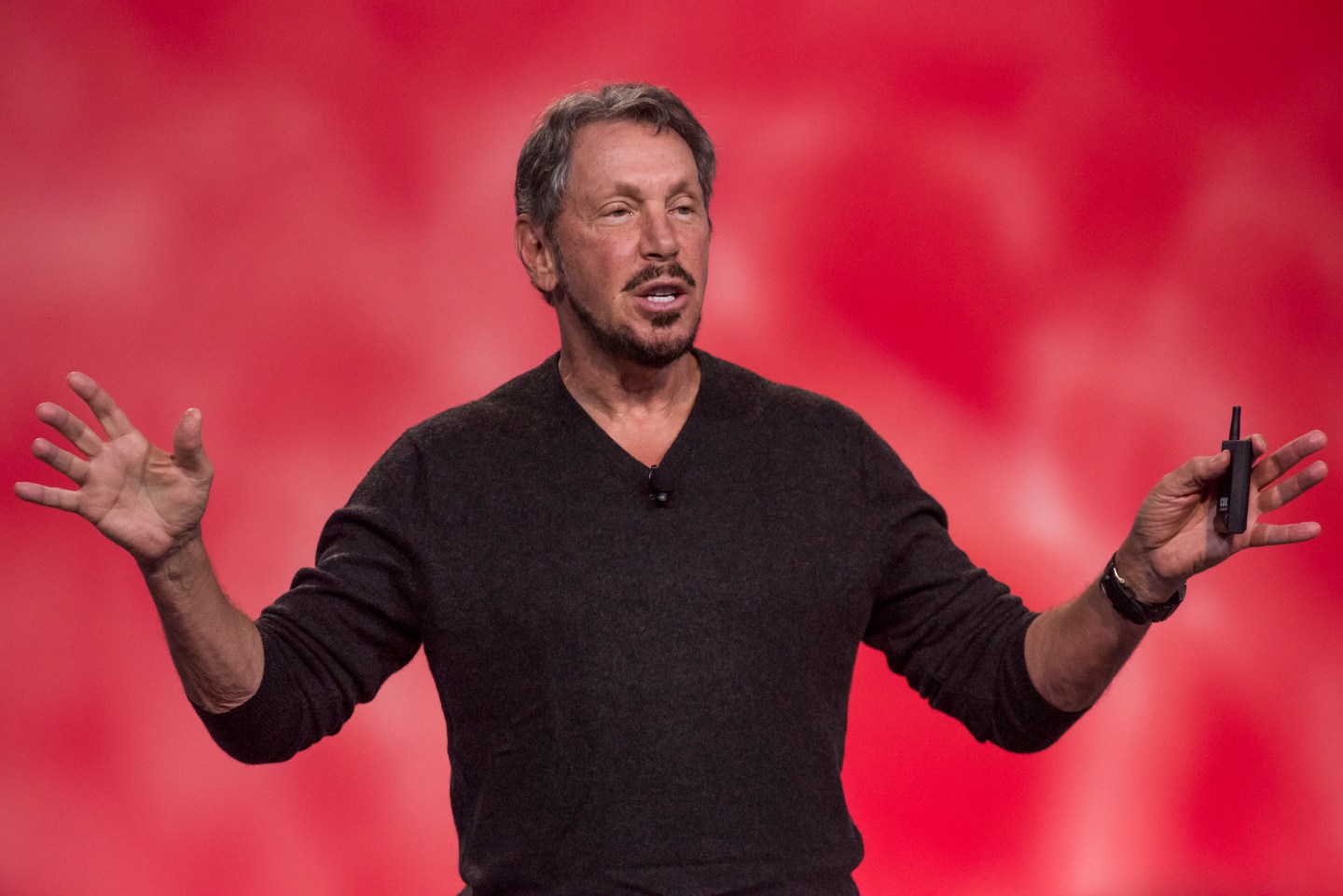 Oracle has built a massive enterprise applications business over the decades: It bought PeopleSoft for $10 billion in 2004, Siebel Systems for nearly $6 billion the following year, and closed a $9.3 billion purchase of NetSuite a few months ago. Despite that, the company clearly still sees databases as Oracle’s bedrock, which is why it’s critical that, moving forward, those databases run on Oracle’s nascent cloud infrastructure.

Generation two of Oracle’s infrastructure as service cloud now has the ability to run customers’ largest databases, something that is impossible to do using Amazon Web Services. Amazon can only run relatively small Oracle databases in their cloud. Gen 2 of Oracle IaaS also delivers ultra high database performance and form caller reliability in the cloud.

Ellison added that some of the company’s biggest customers are now negotiating “huge infrastructure as a service contracts” to move all of their Oracle databases to the Oracle cloud. And, he said to expect some of those contracts to be announced within weeks.

Oracle certainly has competition for those deals given that Amazon (AMZN) Web Services (AWS), the largest provider of cloud infrastructure also runs Oracle databases . The claims and counterclaims between Ellison and AWS chief executive Andy Jassy have flown fast and furious over the past year.

Last year, Jassy said his company’s migration services and database option free big customers from “the shackles of hostile database vendors.” He did not name names, but the implication was clear. At the end of last year, Jassy also tweeted that Amazon had migrated 16,000 databases to AWS; that number was recently updated to 20,000. AWS did not specify which types of databases moved, but given that Oracle leads the market, some are assumed to be Oracle customers.

Fast forward to Wednesday’s call in which Ellison said that many Oracle workloads run ten times faster on Oracle cloud than on AWS. He also claimed Oracle’s infrastructure is also cheaper than AWS for customers.

Here’s How Much Americans Spend on St. Patrick’s Day

That’s the sort of statement that raises eyebrows: Oracle is known for charging a premium for both its database software and related maintenance and support. But given the need to stave off incursions from AWS, it could well be that the company will get more flexible both on pricing and support fees. Customers who may have no intention of moving to AWS can use that company’s migration service, and its variety of database options, as leverage to extract better deals from Oracle.

Ellison and Oracle co-chief executive Mark Hurd both said that this basic cloud infrastructure—which comprises the computers, storage, and networking needed to run database or application software—will be Oracle’s largest cloud business in the future. That will take some doing since, as Fortune’s Jonathan Vanian reported, this segment logged $178 million in sales and constituted just 2% of Oracle’s overall revenue in the third quarter.

For comparison purposes, AWS, which has been around for more than ten years, reported net sales of $3.56 billion for its most recent quarter.