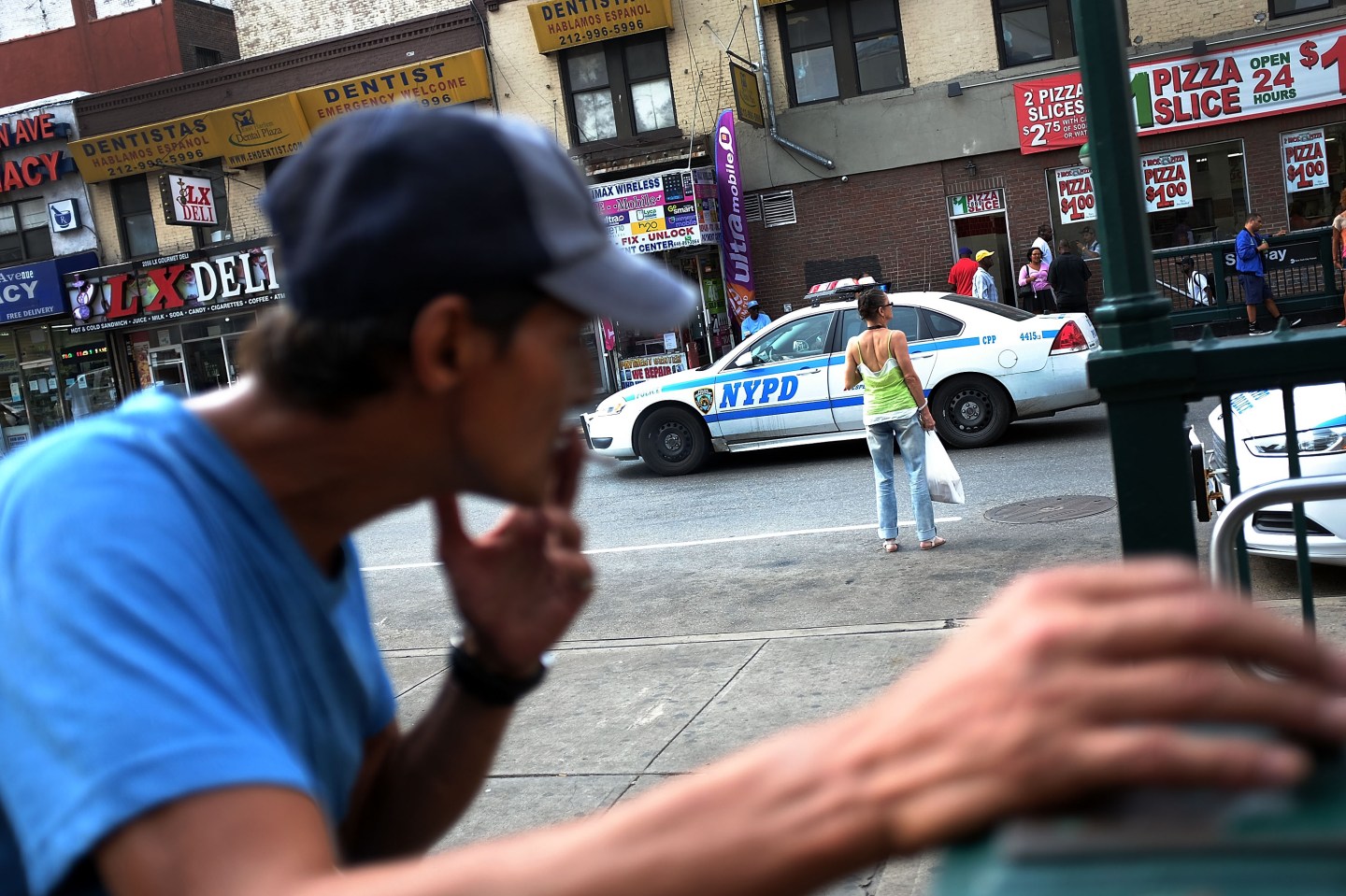 NEW YORK, NY - SEPTEMBER 02: A police car patrols an area which has witnessed an explosion in the use of K2 or 'Spice', a synthetic marijuana drug, in East Harlem on September 02, 2015 in New York City. New York, along with other cities, is experiencing a deadly epidemic of synthetic marijuana usage including varieties known as K2 or 'Spice' which can cause extreme reactions in some users. According to New York's health department, more than 120 people visited an emergency room in the city in just one week in April. While the state banned the ingredients used to make K2 in 2012, distributors have switched to other ingredients and names in an attempt to circumvent the law. (Photo by Spencer Platt/Getty Images)
Spencer Platt Getty Images

Having proven they can win in the West, advocates for recreational marijuana hope the Nov. 8 election brings their first significant electoral victories in the densely populated Northeast, where voters in Massachusetts and Maine will consider making pot legal for all adults.

Supporters believe “yes” votes in New England would add geographical diversity to the legalization map, encourage other East Coast states to move in the same direction and perhaps build momentum toward ending federal prohibitions on the drug.

“We have to get to a point where we can win legalization voter initiatives in other parts of the country,” said Keith Stroup, founder of the National Organization for the Reform of Marijuana Laws, or NORML, a leading group in the legalization movement.

Three other states—California, Arizona and Nevada—are also voting on recreational pot. If the California initiative passes, marijuana will be legal along the entire West Coast. Washington, Oregon, Colorado and Alaska have already voted to permit it. The District of Columbia also passed a legalization measure in 2014, but it has no regulatory framework for retail sales and possession remains illegal on federal property.

Several Eastern states are among the 25 that already allow some form of medicinal marijuana, but none in the region has approved recreational pot.

Big money is at stake, which helps explain why marijuana supporters have raised more than $6 million in Massachusetts and about $1.3 million in Maine, most from outside those states.

Analysts from Cowen and Co. issued a report last month forecasting a $50 billion legal cannabis market in the U.S. by 2026, a nearly tenfold increase over today. But such growth would be predicated on federal legalization. Passage of the November state referendums would be a “key catalyst” toward that end, analysts wrote.

Higher marijuana usage in the West may help explain why the region has been a more fertile ground for legalization, said Matt Simon, New England director for the Marijuana Policy Project, another major pro-legalization group.

“More people have direct experience with marijuana or know someone who has, and that leads to it being demystified,” Simon said.

Recent polls on the New England ballot questions, which propose significantly lower tax rates than those in Colorado and Washington, indicate the “yes” sides trending ahead in both states. Still, passage is far from guaranteed.

In Massachusetts, a socially liberal state, voters previously decriminalized small amounts of marijuana and approved it for medicinal use. This year’s initiative has met formidable opposition from politicians, business leaders, clergy and even billionaire casino magnate Sheldon Adelson, who recently donated $1 million to opposing groups.

The state’s popular Republican Gov. Charlie Baker and Boston’s Democratic Mayor Marty Walsh are among many elected officials fighting the idea. Their arguments include concerns that edible pot products resembling candy or other treats could fall into the hands of children, and that marijuana can be a “gateway” to far more dangerous drugs.

“The availability of marijuana for adolescent users already constitutes an environmental factor for the later use of other illicit drugs,” the state’s four Roman Catholic bishops said in a recent statement. “Its legalization will only serve to worsen this problem.”

A TV ad urging a “no” vote imagines a neighborhood overrun by pot shops and a mother shocked to see her own son emerge from one of the stores. Legalization proponents dismissed the ad as a “smear-and-fear” tactic.

“There is a puritanical streak that runs through New Englanders,” said NORML’s Stroup, a onetime Boston resident.

The Puritans lost their influence centuries ago, and the phrase “banned in Boston” is an anachronism. Yet uneasiness persists when it comes to issues that would have once been considered sinful. Massachusetts, for example, only recently authorized casino gambling and did so in a limited and highly regulated form.

“We want to make sure patients don’t lose access and that small growers will still be able to flourish,” said Catherine Lewis, director of education for Medical Marijuana Caregivers of Maine.

Portland, the state’s largest city, legalized possession of up to 2.5 ounces of marijuana in 2013, but the statewide prohibition still makes buying and selling the drug illegal.

“The Northeast specifically is going to be a very powerful market because of the population density,” said Derek Peterson, chief executive of Terra Tech Corp., which operates cannabis cultivation, production and retail facilities.