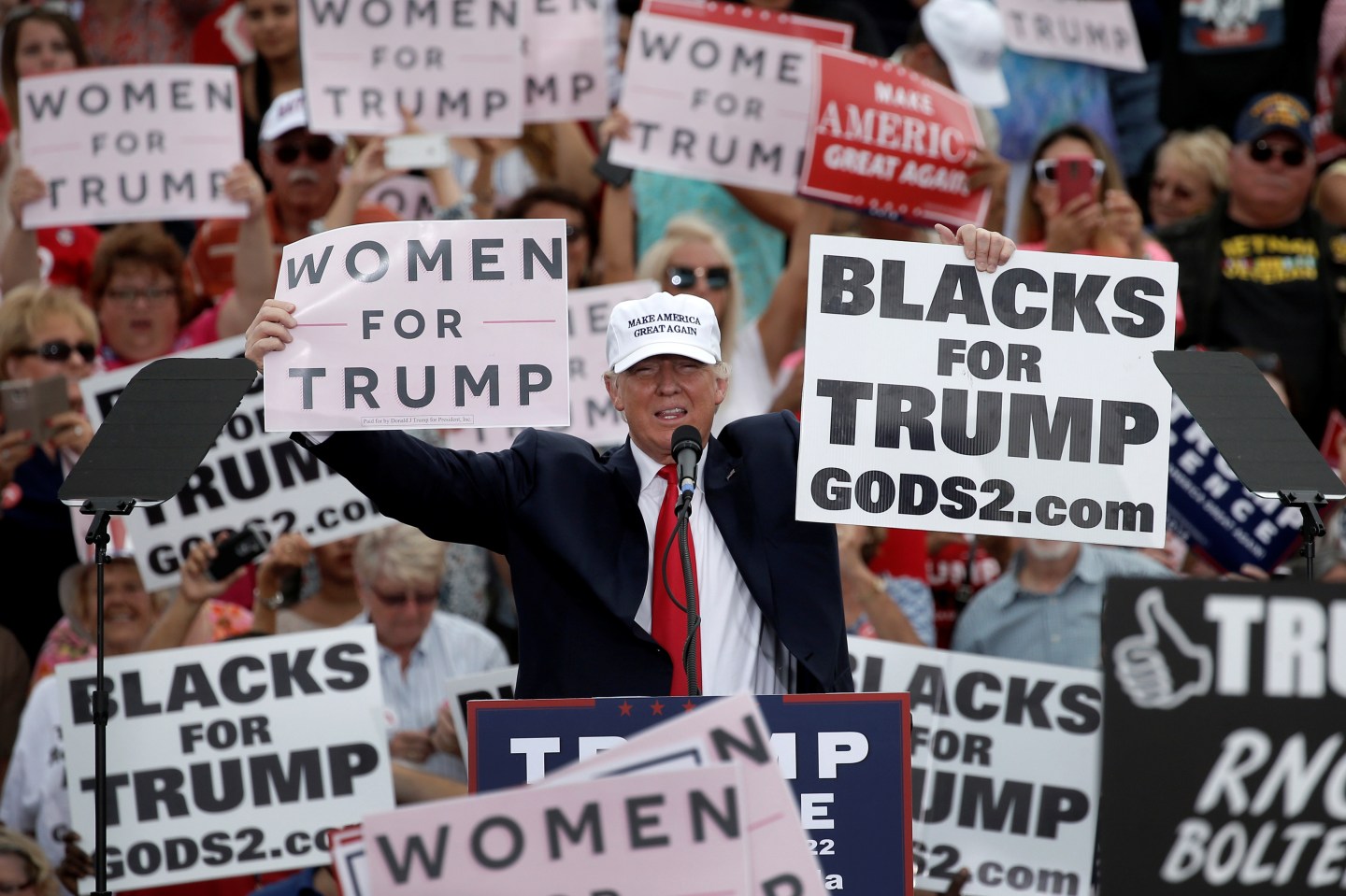 A question obsessing the rightwing political class is taking on new urgency as Donald Trump fades in the closing weeks of the campaign: What’s motivating his supporters?

Republicans already looking past Election Day at the massive party rebuilding project that awaits will need to settle on an answer before they can hope to pick up the pieces from what’s likely to be a shattering electoral defeat. The debate has broken down into roughly two camps: One holds that working-class whites have flocked to Trump out of fear their economic security is eroding; the other contends that’s merely an excuse for the real driving force behind his following, racial resentment. If most of Trump voters can be reached with a rational economic appeal, there should be room for them in a reconstituted conservative coalition. But if they’re moved primarily by anger at other groups, they just might be, in words Hillary Clinton used and then retracted, “irredeemable.”

Yet there may be a third explanation for what’s moving Trump’s voters: it’s not economic anxiety or racial resentment, it’s both. For that view, see The Populist Explosion, the new book by John B. Judis. Writing from the left, with a qualified admiration for the populist impulse, Judis contends that populist insurgencies historically have served as warning signs of larger brewing political crises.

The term “populist” traces its origins to late 19th century America, and Judis argues that early incarnation of the movement prefigured the New Deal, which adopted many of its earliest demands, including a graduated income tax and price supports for farmers. Three decades later, it was George Wallace, the son of a Roosevelt Democrat, who would channel popular backlash against Lyndon Johnson’s civil rights agenda into a rightwing populism (though he began and ended his public career as a Democrat). Wallace is remembered most prominently today as a committed segregationist who tried to stand athwart the civil rights movement. But Judis notes he was an economic populist first, who turned to race-baiting after losing a 1958 gubernatorial bid in Alabama to a KKK-backed rival. Throughout the 1960s, Wallace framed his opposition to integration as a defense of middle-income whites. “There’s a backlash against big government in this country,” he told Meet the Press in 1967. “This is a movement of the people.”

Wallace may be remembered by his commitment to segregation, Judis argues, but his approach was textbook rightwing populism: Defending a group that self-identifies as average against what they perceive as an unholy alliance between those above and below them.

Wallace’s followers migrated to the Republican Party, ending the New Deal coalition that bound Northern and Southern Democrats and accelerating the partisan realignment of the South that later enabled an era of GOP dominance. That era was defined by a new consensus that modified New Deal liberalism with supply-side economics and a more hands-off approach to industry.

Judis casts Trump as the heir to Wallace’s rightwing populism, backed by the same white working and middle-class voters suspicious of empowered elites. He argues that as a deeply flawed candidate, Trump could not only lose but in the process hobble the challenges to Republican orthodoxies that helped power his bid. Yet he makes the case that populism persists because it identifies real problems the two major parties are ignoring.

“George Wallace’s call for segregation forever was clearly racist, but he was right about the pitfalls of busing children of different races from one urban neighborhood to another,” Judis writes. “It did result in white flight to the suburbs and was in that sense self-defeating.”

Similarly, Trump’s protectionist solutions are cartoonish, but “there has been a problem with American trade with China and with unfettered capital mobility.” And if more polished candidates follow in Trump’s footsteps, the party will face a ongoing clash between its white working class and business wings. A reckoning may be a long time coming, but as Judis writes, echoing the economist Herbert Stein, “things that can’t go on forever, don’t.”

A version of this story originally appeared in Fortune’s newsletter, the CEO Daily. You can subscribe here.