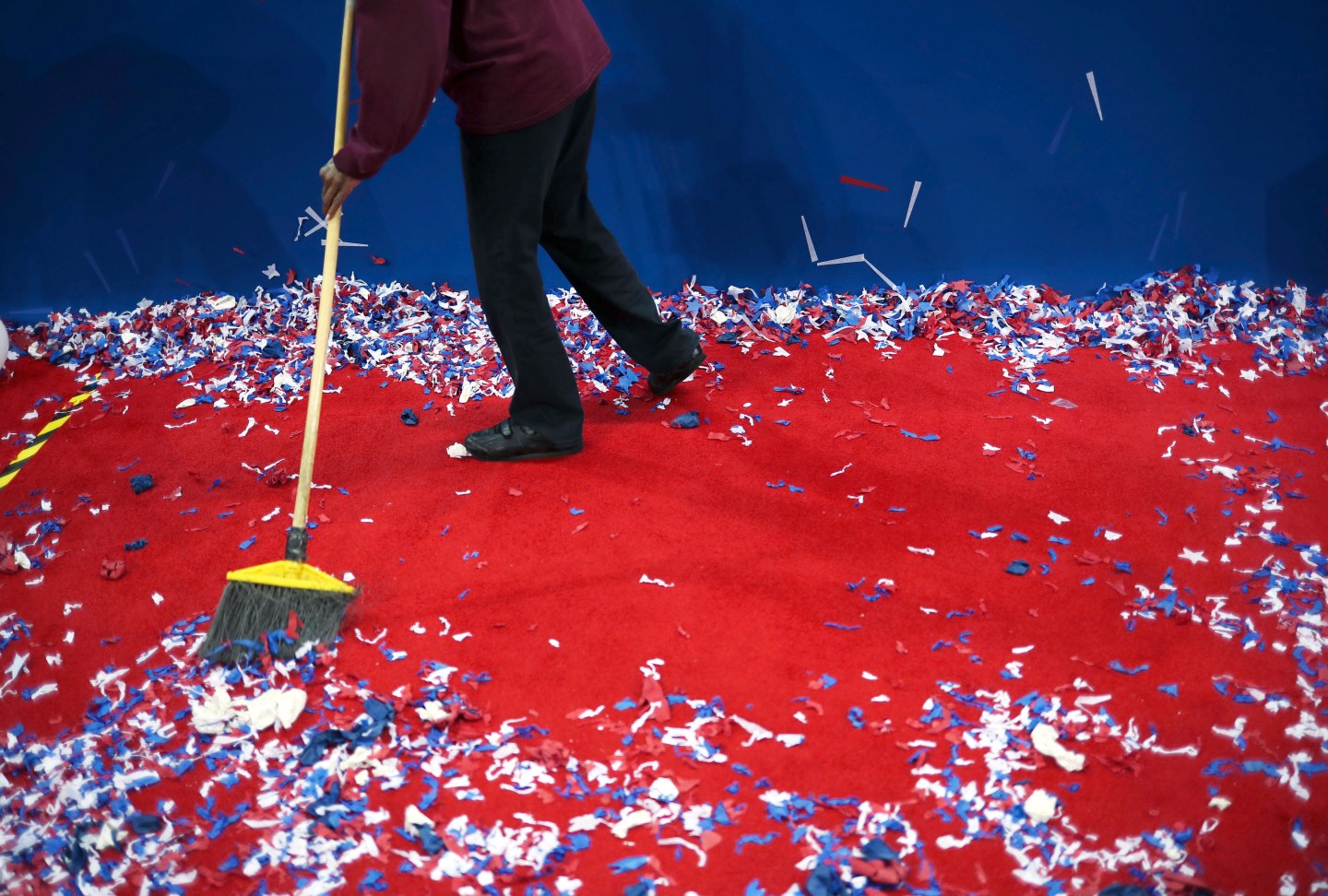 A worker sweeps confetti during the Republican National Convention (RNC) in Cleveland, Ohio, U.S., on Thursday, July 21, 2016. This evening marks the last night of a four-day Republican National Convention that has been defined by disorderly floor activity, divisions within the party, a plagiarized speech delivered by the nominee's wife and scattered protests in the streets of Cleveland. Photographer: Victor J. Blue/Bloomberg via Getty Images
Victor J. Blue — Bloomberg via Getty Images

It would be easy, surveying the political landscape these days, to conclude Americans are keen to slam the brakes on globalization. For the first time in modern history, the two major-party presidential candidates are competing to see who can sound more hostile to free trade. President Obama, despite riding some of the highest approval ratings of his presidency, faces long odds winning congressional approval as a lame duck for the massive Pacific Rim trade pact he has made a top second-term priority.

And the gusts of anti-globalization sentiment at home join a windstorm abroad, from Brexit to the collapse of negotiations on the Transatlantic Trade and Investment Partnership, a sweeping deal to link European Union markets to the U.S. Indeed, trade faces new resistance globally and is on pace to register its slowest expansion since the financial crisis. That fact contributed to the International Monetary Fund’s cutting 2017 growth forecasts—to 3.4% globally, 2.2% in the U.S.—and warning that stagnation could fuel even more protectionism.

But at home, at least, the nativist pitchforks aren’t as legion as they appear. It’s true that pressure from her left during the Democratic primary forced Hillary Clinton to abandon support for the Trans-Pacific Partnership (TPP) she helped champion as secretary of state. And Donald Trump has gone even further, flouting decades of Republican orthodoxy with his pledge to throw up trade barriers, including slapping steep tariffs on goods from Mexico and China. Yet it’s hardly clear that the Republican nominee’s call to withdraw from the world will survive his candidacy.

For one thing, the presidential campaign itself has distorted the debate. Candidates have devoted outsize attention to Rustbelt swing states hardest hit by deindustrialization, largely skipping trade-friendly states like California, Louisiana, or Texas, already firmly in one party’s column or the other. “The antitrade folks are very loud, well organized, creative, and persistent,” says Bill Reinsch, former president of the National Foreign Trade Council. “But in big parts of the rest of the country, it doesn’t play.”

It turns out Americans are much friendlier to globalization than campaign rhetoric would have you believe. ­Sixty‑five percent say it’s mostly good for the U.S., according to a September poll by the Chicago Council on Global Affairs. Even more—70%—say globalization improves things for them personally as consumers, and 60% approve of the TPP. There’s more evidence that while antitrade voices may be the loudest, they don’t carry on election days: Liberal groups pledged last year to exact revenge on the 28 House Democrats who supported a procedural move to ease TPP’s passage. Some faced primary challenges from the left, but none lost.

Still, reading their ranks, leaders on both sides of the Capitol say TPP doesn’t have the support it needs. The White House is deploying a new pitch focused on national security, arguing the pact will check a rising China. But even allies acknowledge that the strategy amounts to a Hail Mary. And if it isn’t approved before the next President is inaugurated, it will languish for the foreseeable future. That is, writ small, the challenge facing globalists: The arguments for more integration may be sound, but against a rising tide of skeptics, gains in global trade won’t keep coming just because they have for the past half-century.

A version of this article appears in the November 1, 2016 issue of Fortune with the headline “What Happens After the Election.”