Dreamforce Spanned the Ridiculous to the Sublime to the Somewhat Scary 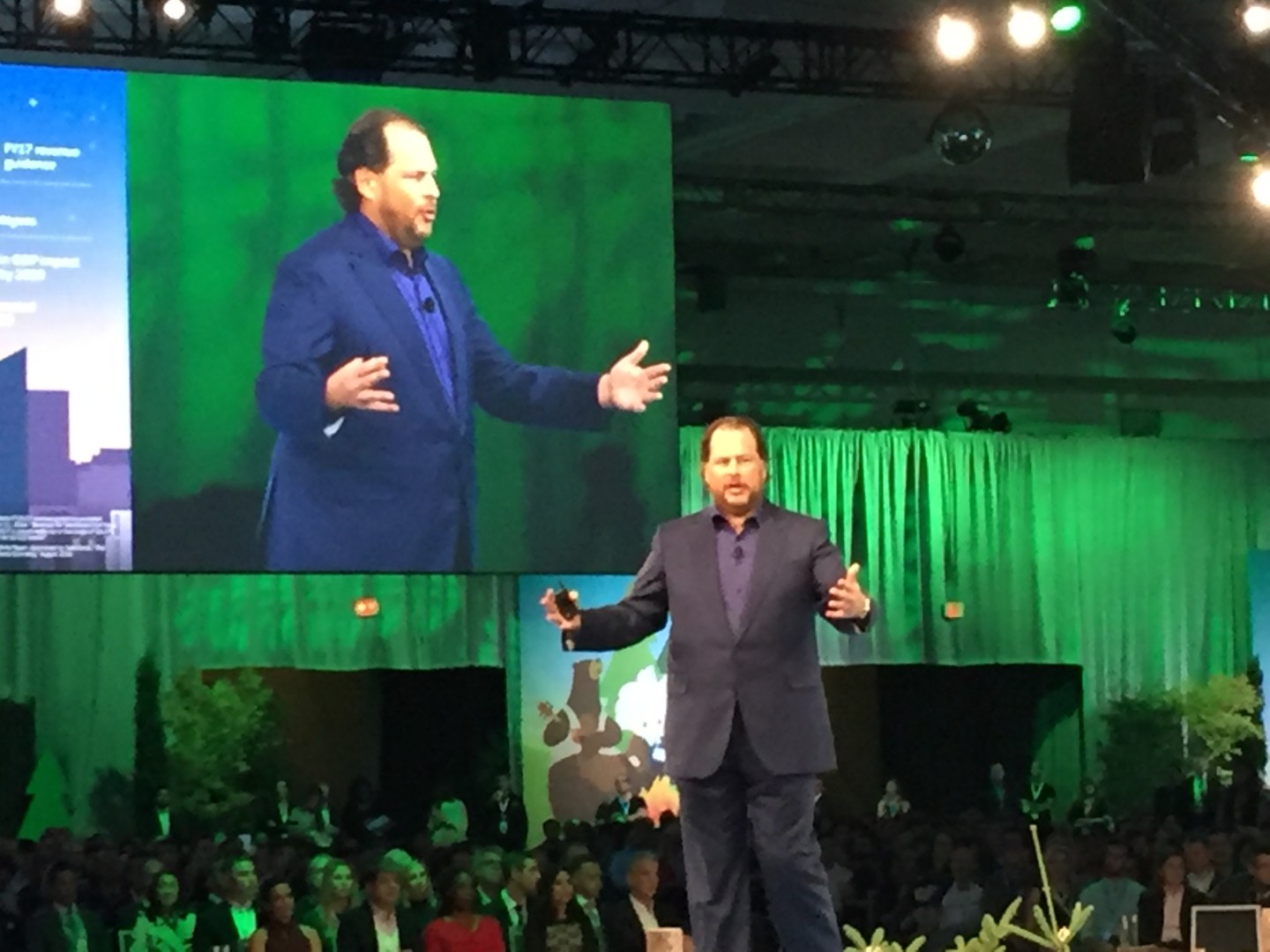 Last week’s Dreamforce, the annual traffic-clogging, product-hyping vision quest held by Salesforce in San Francisco, wasn’t big on news. The big reveal would have been an announcement of Salesforce’s planned acquisition of Twitter, but that didn’t happen. And the product news—that Salesforce is sprinkling its Einstein-branded artificial intelligence like fairy dust over its existing sales, marketing, e-commerce and service software—was carefully pre-leaked (er announced) in dribs and drabs over the past month.

Lack of hard news aside, here are five things that resonated.

1: Marc Benioff could sell sawdust to the lumber mill.

Reporters were skeptical that this AI capability, much of it from Salesforce’s acquisition of Metamind announced just six months ago, can really be integrated with Salesforce’s core offerings so soon. The company says its Demandware-based Commerce Cloud already incorporates a bunch of it, with other AI capabilities to be folded into the software next year.

But Salesforce chief executive Marc Benioff & Co. are selling an idea as much as a product. That idea is that smart software should be readily accessible to business people in a way that they can make use of it without an assist from some data scientist somewhere. So a sales person will be presented with a list of sales leads that are most likely to write a check, for example, without having to pore through their email and messages.

That’s compelling. The knock on IBM’s (IBM) trailblazing Watson early on was that it was more science project than product and needed a ton of help from customers, integrators, and techies to make it work in business context. Hence all those IBM business units to make Watson applicable to normal humans.

2: Companies want to know all about you, but the feeling may not be mutual

There was a ton of talk about how Salesforce’s ever-smarter software will help its business customers track their customers or prospects from their first visit to a web site, to online product demos, to comments and queries on social media, to a purchase, to follow-up service calls. This so-called “360-degree view” of the customer is the holy grail promised not only by Salesforce but Oracle (ORCL), SAP, and Microsoft (MSFT) and IBM (IBM) to their business customers.

But, while that might be great for companies wanting to sell as much stuff as possible, many would-be buyers aren’t so hot on the idea of being followed around during the course of their daily on- and off-line activities. Many consumers are already sick and tired of being queried to death after purchases so it’ s not clear that they will welcome even more prying if there is no discernible benefit to them.

@gigabarb Say I awake at 1:42 AM, can't sleep, decide to put on a VR headset to rock climb. Why does a company need to know that?

The most telling moment of the show for me came when a top executive of a large Salesforce (CRM) retail customer first stressed how much he wants all that customer data, but two minutes later said he himself has zero social media presence. Not on Facebook (FB), Twitter (TWTR), Instagram, or even the more business-focused Linkedin (LNKD). Why not? He doesn’t want to give anything away about himself for security reasons.

So while he wants to track others, he himself does not want to be tracked. Hmmmm.

As usual, the show emphasized the notion of doing well by doing good. Melinda Gates, co-chair of the Bill and Melinda Gates Foundation was a speaker.

“Does anyone really think Gates would show up at a sales automation software conference?” asked one former Salesforce exec. For Gates and other do-gooders, this is about Benioff’s outside work like funding the UCSF Benioff Children’s hospital.

RED, the Bono-led charity which wants to end AIDs, was on hand, and for every dollar raised at the show up to the first $1 million will be matched by the Gates Foundation. Other featured speakers included civil rights icon and Congressman John Lewis, RED chief executive Deb Dugan, and National Domestic Violence Hotline chief executive Katie Ray Jones.

4: This show is good for the city

The trade-off for all that annoying south-of-Market gridlock is that Dreamforce brings lots of dough to San Francisco, the company’s home town. On Wednesday morning, Mayor Ed Lee said the city reaps some $200 million in revenue from the event, from hotel and meal taxes and the like.

5: From furry mascots to Buddhist monks

Salesforce has a thing for furry (some say creepy) mascots. This year a puffy Einstein joined the SaaSY “No Software” blob. There’s also Codey the bear and some sort of squirrel/raccoon/marmot (?) hybrid called Astro all of which were dancing and prancing around the Moscone Center.

On the other end of the spectrum were the Engaged Mindfulness Zones manned by Buddhist monks, set up on Howard Street. There’s something endearing about an event sponsored by a hyper-competitive software company that also promotes the idea of slowing down and taking stock.

The show’s funniest moment came during Benioff’s keynote he touted the need for mobile software, and being connected. When he asked attendees to raise their hands if they have a smart phone, 98% did, only the few dozen brown-clad monks did not follow suit. “Oh, the monks are not raising their hands. Saddest moment of the keynote,” he noted, tongue in cheek.