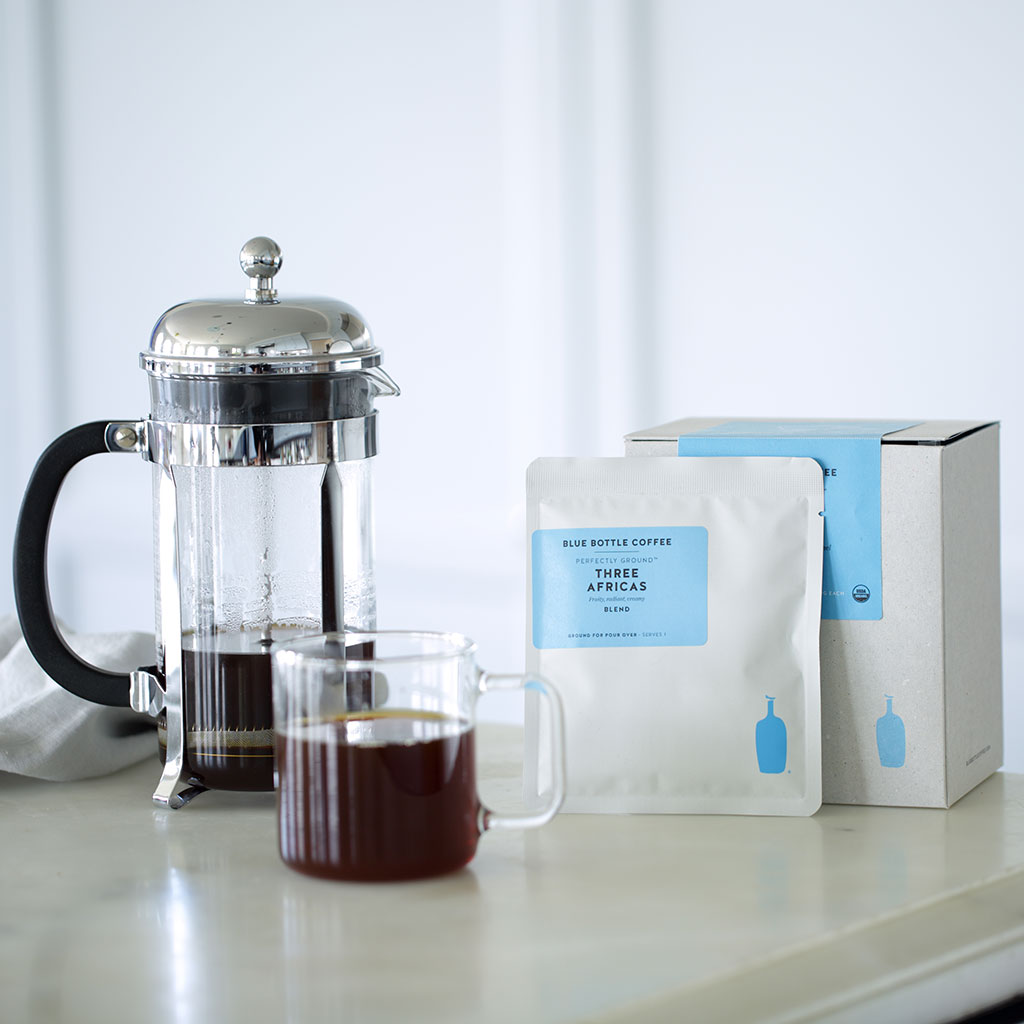 You’ll find few people as meticulous about their coffee as Blue Bottle Coffee founder James Freeman. Time, temperature, weight, grind—Freeman has spent his career in coffee controlling every element of a cup. Even the founding claim of his cultishly popular shops was specific down to the hour — he said he would never serve coffee more than 48 hours old. That sort of detail and precision is what gave Blue Bottle its reputation, but it’s also what made the experience challenging to duplicate at home. Freeman and his vice president of technology Neil Day are making it a little easier though. For the first time Blue Bottle will sell pre-weighed and pre-ground coffee beans called Blue Bottle Perfectly Ground. The pair claims that their new technology “stops the clock on coffee’s aging.”

Freeman and Day stopped by our offices to explain how a company as uncompromising about its products as Blue Bottle could finally turn to a form of coffee no self-respecting coffee drinker would use for anything besides compost. The short answer: They spent a lot of time in a laboratory.

Day spent decades working on tech for heavy hitters like Apple and Shutterfly, where he was CTO until deciding to go to barista school. And over the last several years he has developed a method to stop coffee from going stale by grinding every bean identically and completing the entire process from grind to packaging in an oxygen-free environment. The result is a pouch containing exactly the right amount of coffee, with particles of exactly the right size that will taste fresh for up to six months.

The pouch that Day brewed for us was two months old and if he hadn’t told us that up front, we wouldn’t have known.

Why Your Morning Coffee Is About to Become Even More Expensive

Carrying around high quality, pre-ground beans that won’t go stale means no more day-old breakroom coffee that Tanya from accounting still can’t figure out how to make correctly and no more shitty hotel coffee when you’re on the road. We’ve consumed a lot of both of those over the years and are very much looking forward to their demise.

You can start stocking up on Blue Bottle Perfectly Ground October 4 at Blue Bottle shops in San Francisco, Oakland, New York, and Los Angeles and Blue Bottle’s website for $17.50 for a pack of 5. And, because this is Blue Bottle we’re talking about, it comes ground for whatever brewing method you prefer: French press, Pour Over, Aeropress and even coffee maker. Who knows, maybe you can teach Tanya from accounting how to make good coffee after all.