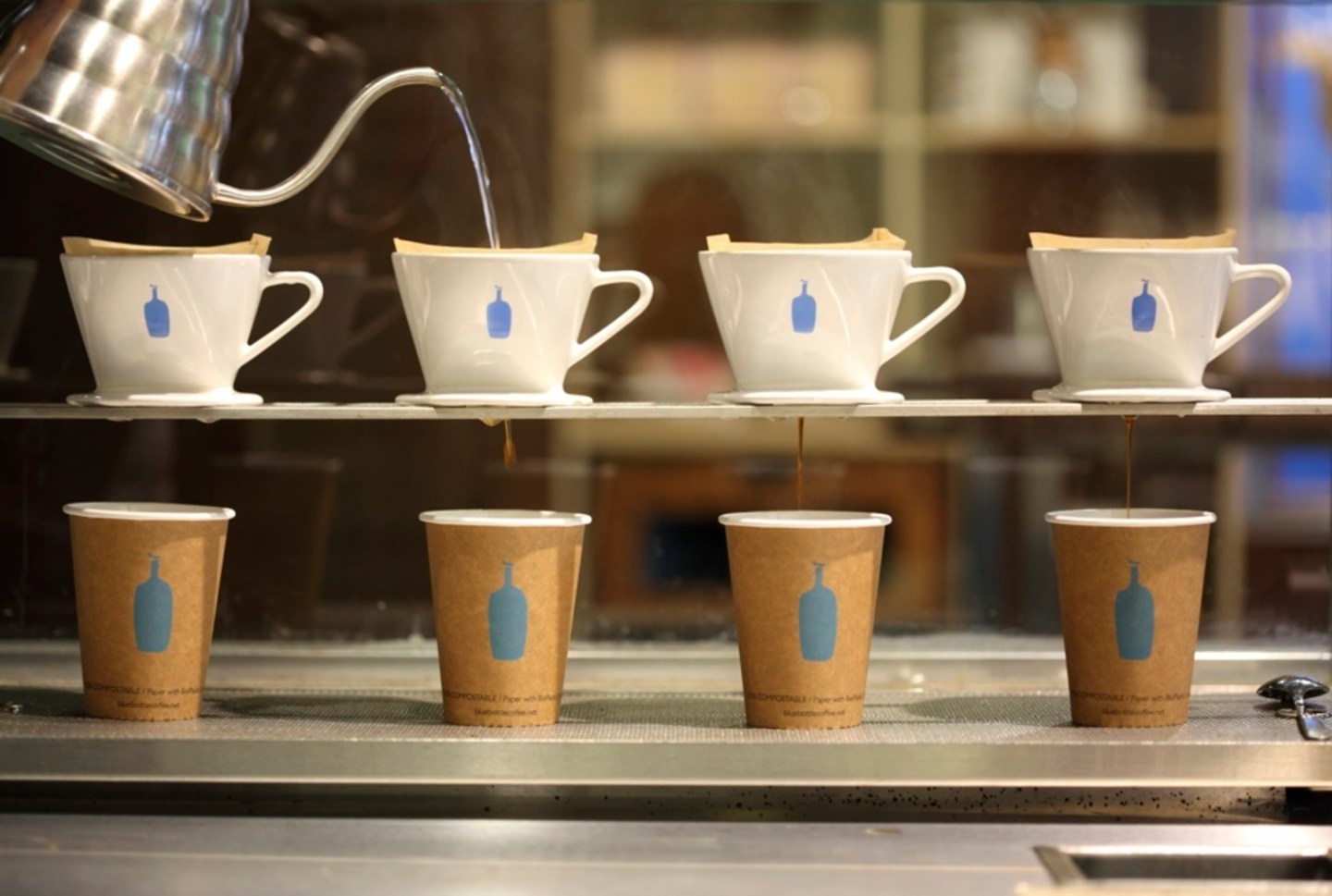 In October, Blue Bottle Coffee quietly pulled its plastic cups from all of its stores in the U.S.

Since that time, if you walked into a Blue Bottle café and ordered an iced coffee, you received it in a thick, cardboard cup normally used for hot coffee. It was a fix that caused much consternation—call it the Blue Bottle coffee cup crisis of 2015—but it is coming to an end at last, Fortune has learned.

Why has Blue Bottle, a hot Oakland-headquartered startup backed and frequented by the tech community, been serving iced-coffee in hot-coffee cups? Because it had decided that its cups were not durable enough. “The cups didn’t hold up as well as we wanted, so we decided to explore new vendors that would provide sustainable and durable options,” says Rifkin Young, director of finance operations at Blue Bottle. “We constantly re-evaluate our practices to make sure we’re living up to our own standards, and we didn’t feel that our iced-beverage cups made the cut. We opted to switch to the hot cups while waiting for our new cold cups to arrive.”

If durability was the chief concern, it’s puzzling that Blue Bottle dumped its old cups in the interim to adopt cardboard, a material that is fundamentally incompatible with the beverage.

You might think that using hot cups for iced coffee was no big deal, and indeed, no one reported on the change, which lasted months. But for iced-coffee lovers, it was devastating to the Blue Bottle iced-coffee experience—a painful time akin to last year’s lime shortage for Corona drinkers.

The cardboard cups get soggy when used as iced-coffee vessels. How quickly? Based on a week of daily testing, the walls of the cardboard cups soften after just 35 minutes. (To be sure, many people may finish an iced coffee in a shorter time than that.) With the previous cups, the condensation caused by the ice was not absorbed into the plastic—it would bead on the outside, like any standard plastic cup you’d be given at a Starbucks or Dunkin’ Donuts. The paper cup acts as a sponge, soaking up the cold and weakening the cup’s structural integrity.

Compounding the situation, drinkers had to use the lids that match the cardboard cups. The Blue Bottle straws (in their charming light-blue color) do not fit through the small square opening at the top of the cardboard-cup lids; they get crimped. To make it work, you have to rip open the hole in the lid—not a good look for a company that has been praised for its design.

An employee of a bookstore in the Rockefeller Center shopping concourse, who wished to remain anonymous for fear of damaging a budding relationship with a Blue Bottle barista, noted the change last month and said, “The hot cups just don’t work for iced coffee. It’s a real problem.”

In a way, the makeshift solution made for an interesting, albeit accidental, experiment. Matt Bachmann, co-founder of cold-brew maker Wandering Bear Coffee, picked up an iced coffee on Tuesday at the Blue Bottle in Manhattan’s Chelsea neighborhood, which was still using the hot-coffee cups. “I realize, drinking it this way, that so much of iced coffee is visual,” he says. “For cold coffee, which doesn’t have the aromatic and smell appeal that hot coffee does, you derive pleasure from adding the milk into the cup, seeing the color.” Drinking iced coffee from a non-transparent cardboard cup, he says, “actually diminishes a lot of the sensory experience of having an iced coffee.” And since the chicory in Blue Bottle’s New Orleans cold brew gives the brown coffee a nice brick-red tint, the coffee’s unique visual appeal was lost.

Now Blue Bottle says its coffee-cup nightmare is ending: the first shipment of new plastic cups arrived at its warehouse in Brooklyn last Friday. They are currently being distributed to all of its U.S. locations. Californians have already breathed sighs of relief, as their Blue Bottle shops received the new plastic cups first, a few weeks ago. New York locations will change over to the new cold cups by the end of this week.

The new cups are made by NatureWorks Ingeo, made from plants, and certified compostable by the Biodegradable Products Institute. Previously, the chain had been using Fabri-Kal’s Greenware-branded cups, which are also made from Ingeo biopolymer and are also certified by the BPI. With both cups made from the same materials, it is still unclear what the structural issues really were.

The chain has 21 cafés in the U.S. (10 in the Bay Area, seven in New York, four in Los Angeles) and two in Tokyo. It has raised $126.7 million in private venture capital, but its fortunes have seen some recent reassessment. Fidelity, which invested $21 million last May, marked down the value of its private shares in Blue Bottle by 43% internally, then marked them down again, putting its apparent valuation well below the previously reported $420 million. The next month, Blue Bottle announced it would kill off its wholesale business.

As New York Times coffee critic Oliver Strand tells us, cup struggles wouldn’t matter anyway if people drank their iced coffee in what he sees as the proper fashion: in a glass, inside the shop. “I rarely get coffee to go,” he says. “I like to drink it there in glass or ceramic and enjoy the space, the light, the seating outside. I’m paying for it, so I might as well use it.”

Of course, not everyone has the time to sit. And those who grab their iced coffee for the road require efficient function. For iced-coffee fanatics who had noticed Blue Bottle’s cumbersome cup situation this fall, good news: It’ll all be over soon.

For more on the coffee business, watch this Fortune video: