Starbucks’ Howard Schultz Pounds the Pavement to Get Out the Vote 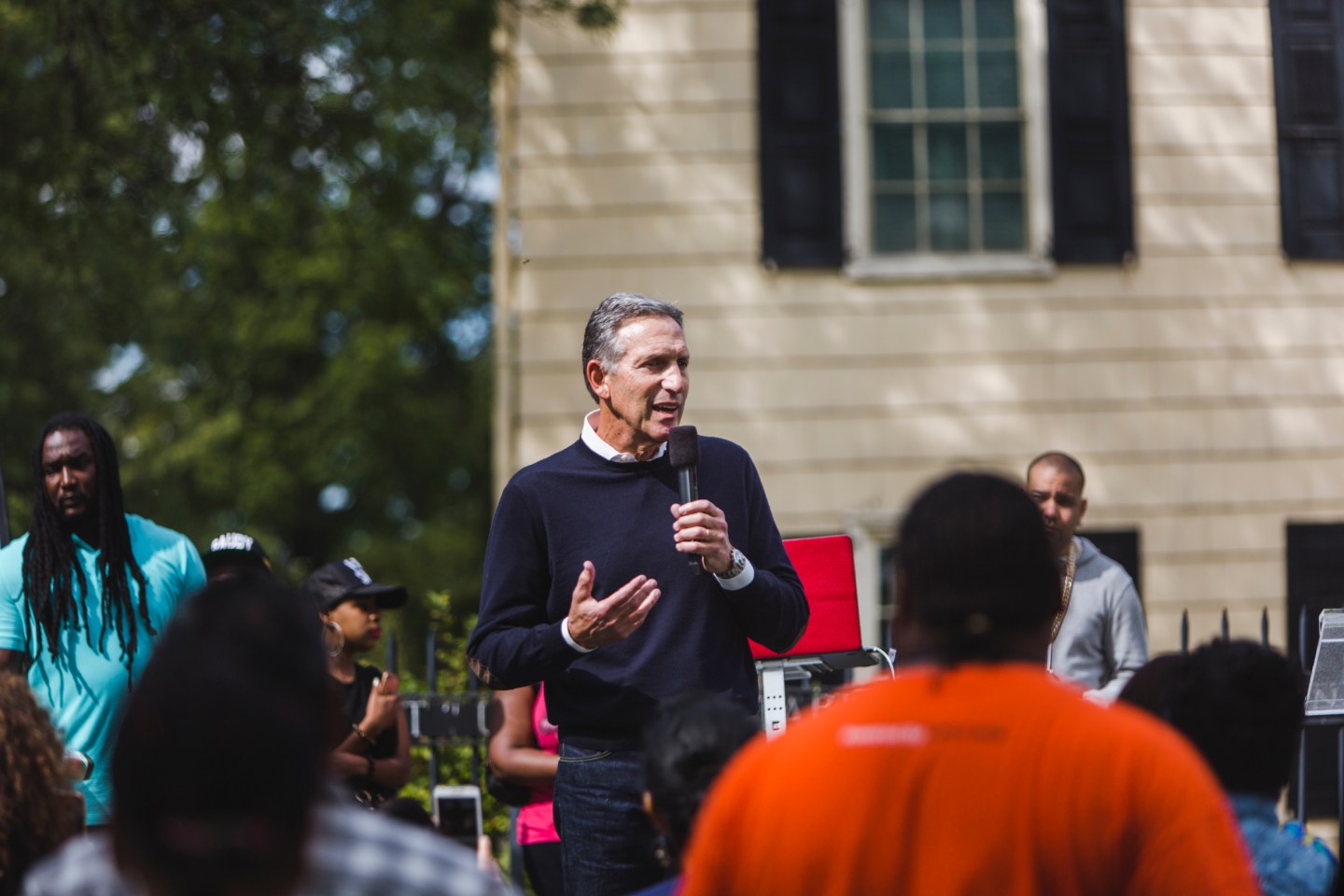 On Tuesday, Howard Schultz, the CEO of Starbucks and his friend, rapper, songwriter, actor and activist Common took to a small stage in Rufus King Park in Jamaica, Queens to encourage the crowd to get out the vote. It was a collaboration between Starbucks, The Common Ground Foundation and Democracy Works.

But Schultz’s appearance was also part of a bigger plan to use coffee as a brew for economic transformation in neighborhoods where people are being left behind.

“For the past year or so, Starbucks Coffee company has tried to use its platform and scale to start a national conversation,” Schultz began. “We’ve been to Ferguson, we’ve been to Oakland, we’ve been to Milwaukee, Houston, Chicago all the places around the country where there has been significant racial tension.” The problem, he said, is almost half of the country is not voting, and that can’t continue. “If we as Americans, regardless of our race, our station in life, our sexual preference, if we are not happy with the state of play in Washington, with the dysfunction, the lack of leadership…the only way we can change that is to participate and register and vote.”

Common did not disappoint, giving a similarly rousing rallying cry, which included a spontaneous recitation of his latest single, “Black America Again”. (FYI, the video opens with graphic footage of police violence.)

But it was a validating moment for Schultz, who has increasingly dedicated himself to the transformation of urban communities through jobs and leadership training, particularly in under-served zip codes. And he was just as popular as the other star on stage. Queens Borough President Melinda Katz, who introduced Schultz, thanked him for believing in the neighborhood. “Starbucks…has made it their work to invest in Queens,” she said. “Queens is popping!”

“We really think of Starbucks as a platform,” says Schultz, who has openly endorsed Hillary Clinton for president. “I’m very worried about the state of leadership today, particularly around race.” And the current level of incivility is making things worse. “Meanwhile, we’re leaving millions of people behind, and I do think we have a responsibility to create a real agenda to address that.” But, he says, it’s not just feel-good corporate speak. “Bottom line we’re coming to these communities because it’s good business.”

Nishon Rivers is a believer. The Jamaica native – who hilariously framed the preternaturally photogenic Common out of a picture to get a better shot of Schultz – told me that Schultz is nothing less than a local hero. “What Howard is doing, is giving the black youth a chance,” she said, trailing the CEO as he walked the park shaking hands with future voters and baristas. “We wanted a Starbucks in Queens and it’s here!”

She was flanked by other people, many wearing green Starbucks aprons, all young and black or brown, who were just as thrilled to meet the coffee chieftain. “A lot of time you go into these stores,” she points up toward Jamaica Avenue, “and they don’t want to hire you – maybe it’s your race, or your ethnicity or sometimes you may just have an issue you can’t get a job.” The training, she says is key. “Talking … you have to use the right words to speak, right?” she says. “You have to help people learn these skills. And they have tuition reimbursement! I love that. We need that.”

The Queens store is part of a larger plan to hire about 10,000 people between the ages of 16 and 24 in new stores to be opened in 15 diverse low to medium income urban communities across the US, like ones already operating in Jamaica, Ferguson and Chicago. The Queens store, which is in a newly renovated building on Sutphin Blvd, includes an employee training center, the second in the country. “My best friend is the manager there,” Rivers gushes. “I’m so proud of her.”

Rivers herself has a masters degree in public administration and has worked for the City of New York for the last 17 years. She has one teenaged daughter and she is worried about her – all the kids, really – anyone who is young and black in the 21st century. Howard, he gets it. “My first job was at a Starbucks,” she says, nodding slowly. “They got me started.”