The Construction Industry Is in Love with Drones 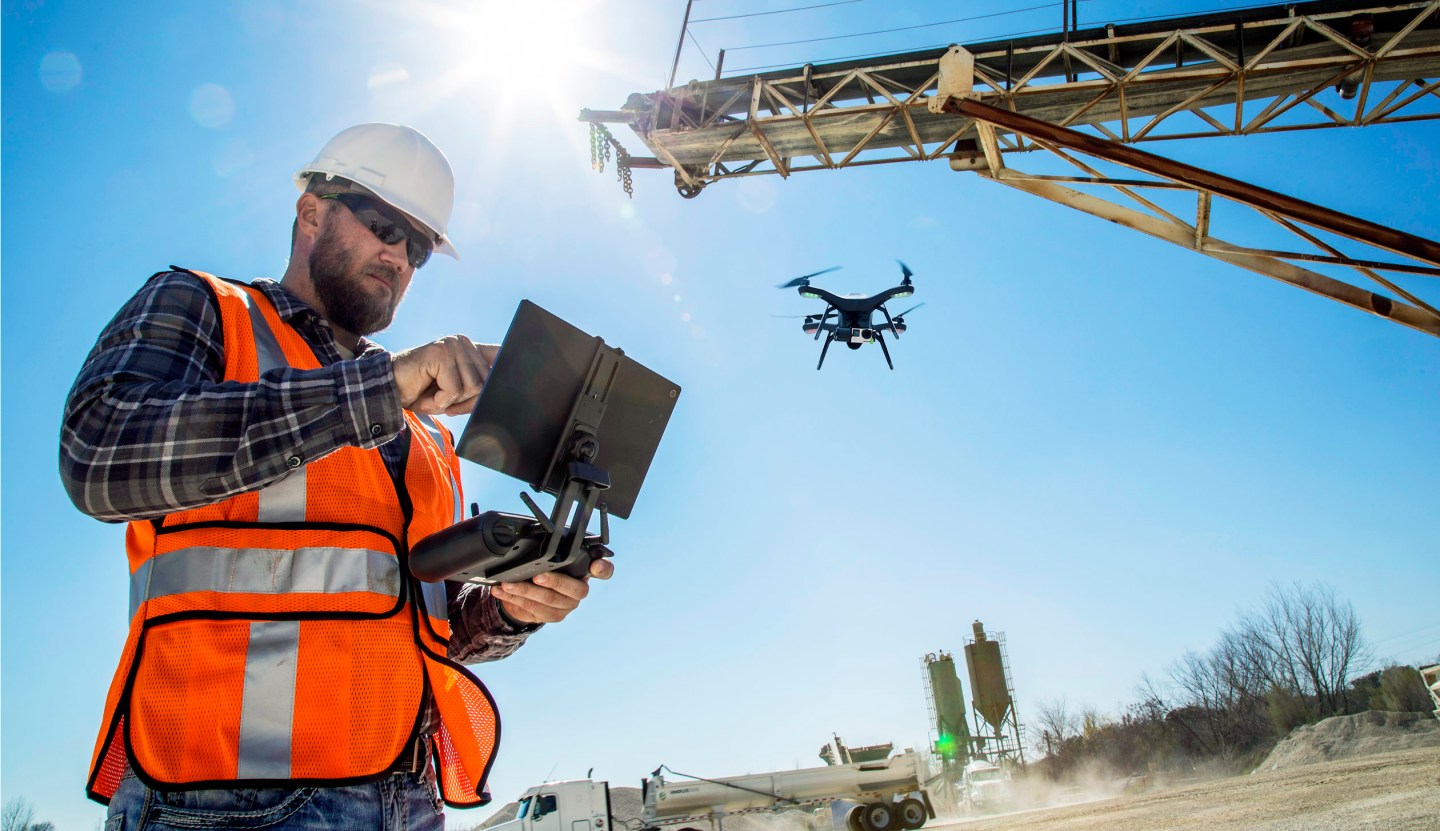 The $8.5 trillion global construction industry isn’t exactly known for its efficiency. The U.K. Green Building Council estimates that 15% of materials delivered to construction sites end up in landfills, the result of mismanaged scheduling and purchasing. The American Institute of Architects believes building-related waste makes up anywhere from 25% to 40% of America’s solid-waste stream. With construction spending in the U.S. totaling $1.13 trillion this year, those losses add up to more than $160 billion in waste—and that’s just in America.

With that kind of scale, small gains in efficiency can translate to billions in savings for the construction industry, says Tristan Randall, strategic projects executive at Autodesk. The San Rafael, Calif., company’s AutoCAD design software is used by designers the world over to model everything from office furniture to buildings to aircraft components. It also happens to be one of the world’s largest makers of building information modeling (BIM) software, used by designers, engineers, and architects to digitally model the physical objects they seek to create.

For more on drones, watch this:

Autodesk doesn’t make hardware; that’s the domain of its customers. But as construction companies increasingly turn to unmanned aerial vehicles—drones—to reclaim some of those wasted billions, the software maker finds itself on the front lines of a hardware revolution. “Our vision is basically a drone on every construction site,” Randall says. “And we think that’s a feasible vision.”

He isn’t the only one who thinks so. The construction industry has emerged as a key driver of the nascent commercial drone industry, which some analysts believe will top $5 billion by 2020. PwC estimates the current value of labor and services likely for replacement by drones to be $127.3 billion. More than one-third of that comes from the infrastructure and construction industries.

Read More: Here’s Why Mercedes Is Betting on Drones and Self-Driving Robots

For builders, the case for return on investment is straightforward. Drones are cheaper to fly than manned aircraft and faster than human surveyors, and they collect data far more frequently than either, letting construction workers track a site’s progress with a degree of accuracy previously unknown in the industry. With the right computing tools, builders can turn sensor data into 3D structural models, topographical maps, and volumetric measurements (useful for monitoring stockpiles of costly resources like sand and gravel). Collectively, that intelligence allows construction companies to more efficiently deploy resources around a job site, minimize potential issues, trim costs, and limit delays.

Several ­technology ­companies—senseFly, DroneDeploy, Skycatch—have developed software for this growing market, but the products often leave much to be desired, says Tomislav Žigo, director of virtual design and construction at Clayco, a Chicago firm that uses drones on its job sites. “Where it really breaks down is the processing and analytics,” he says. “The software industry needs to provide us solutions. They were very quick to jump on the bandwagon and say, ‘Here’s more data,’ but the last thing you need on a construction project is more data that you don’t have time to process.”

Last year Autodesk (ADSK) began moving to address the discrepancy. In November it invested an undisclosed sum in Skycatch, which makes hardware and software for the construction industry. It followed that with a June investment in 3D Robotics, with which the company is developing a specialized drone equipped to scan built environments and beam data directly to the cloud. Autodesk also developed its own cloud-based design platform, called Forge, intended to help its customers quickly obtain and manipulate data.

The notion of an end-to-end data flow is hardly cutting-edge for the technologists in Silicon Valley and beyond, but it’s a big upgrade for the construction industry. Still, it’s early days, says Dominique ­Pouliquen, a drone-initiative coordinator at Autodesk. “We are still in the learning phase with our customers as to what data they really need to extract meaning,” he says. “There are still discoveries to be made.”

Read More: Chipotle Is Delivering Burritos by Drone at This College Campus

“It’s going to be less about hype and more about real, tangible ROI,” he says, using the acronym for return on investment. “And it’s going to rewrite how people do construction.”

Correction, Sept. 13, 2016: An earlier version of this story misstated the value of the global construction industry. It is $8.5 trillion.

A version of this article appears in the September 15, 2016 issue of Fortune with the headline “A Drone for Every Job Site.”