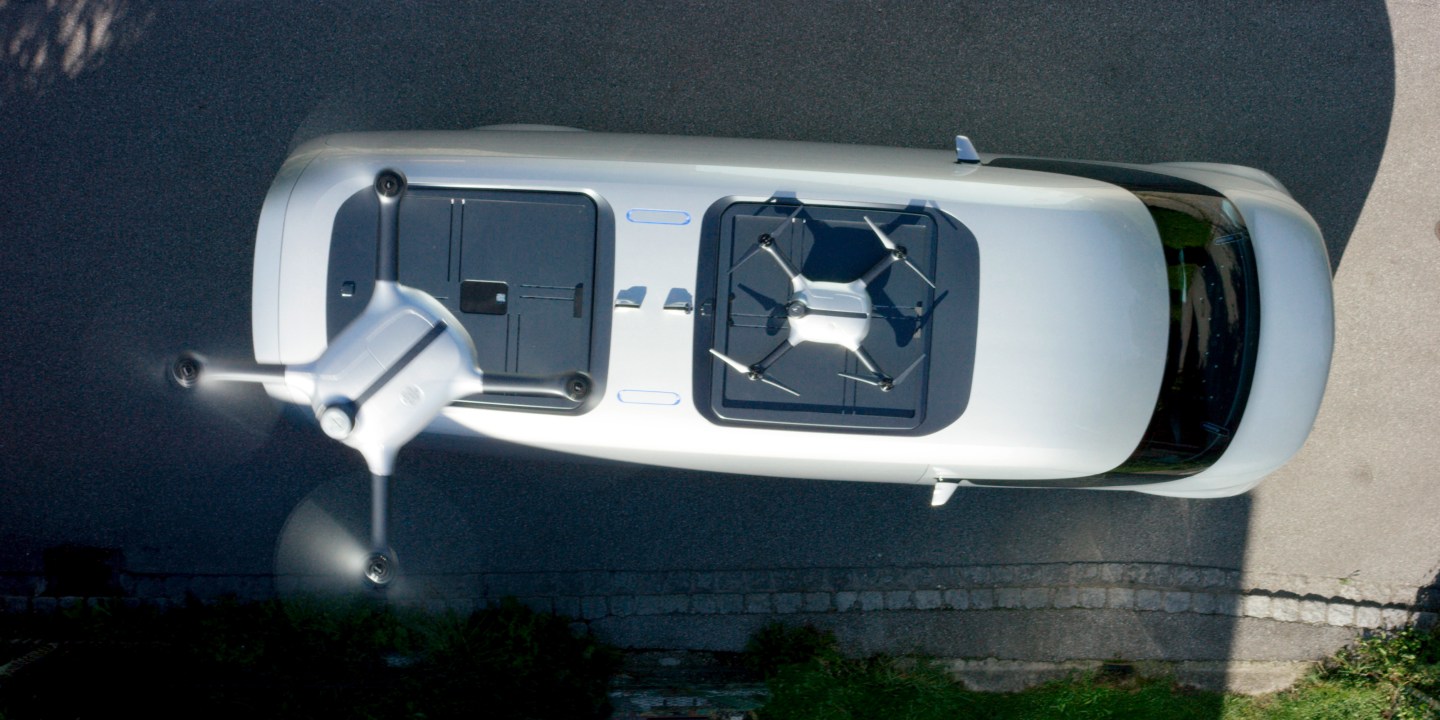 Daimler AG will invest $562 million over the next five years to develop an advanced ecosystem of vans, flying drones, and robots—all linked via wireless networks—to speed up the delivery of packages and people.

The effort follows a boom in electronic commerce, which has forced logistics companies to find new faster ways to deliver packages to customers. Daimler-owned Mercedes-Benz Vans, which makes the popular Sprinter, has the manufacturing know-how, international reach, and capital to capitalize on demand for faster delivery. The new initiative enables the German company to evolve from beyond a manufacturer of its ubiquitous cargo vans.

The maker of Mercedes-Benz cars, trucks, and vans said on Wednesday that its strategic initiative—dubbed adVANce—will focus on three areas all aiming to improve the efficiency and speed of deliveries and transport. The company will work on integrating smart technology, such as a small computer, so that the van can collect and process data on the vehicle’s location, load, and delivery route and then send that information to the distribution manager.

Mercedes wants to develop automated delivery systems for its vans, including using flying drones and self-driving robots to sort and deliver packages faster, as well as experiment with other concepts, such as ride-sharing, to make the transportation of goods and people more efficient.

As part of its new initiative, Mercedes is investing an undisclosed “multi-million-dollar” amount into Matternet, a Menlo Park,Calif.-based autonomous drone logistics startup.

The two companies worked together on the Mercedes Vision Van, a concept vehicle also unveiled Wednesday that embodies all of its future transport ideas. The Vision Van is electric—a critical feature as cities pass stricter emissions laws for its busiest urban centers—and is equipped with an automated cargo space and delivery drones. The van driver can deploy the autonomous drones to deliver multiple packages to customers by air, while he or she walks to another customer’s home.

The Vision Van concept, which has a battery range of up 168 miles, would also be equipped with cloud-based software that could communicate with a main distribution center or calculate ideal delivery routes for the package deliverer.

Volker Mornhinweg, head of Mercedes-Benz Vans, estimates the vehicle could an increase productivity up to 50% in last-mile delivery services.

Mercedes is also working with Starship Technologies to develop a van equipped with autonomous delivery robots. The so-called Robovan could pull up to a neighborhood with several customers and act as a mothership. The van could send off the self-driving robots to deliver lighter packages while the driver carries a heavier parcel to a home or business.

These vans would be equipped with a racking system that would enable 400 packages to be delivered every 9-hour shift, compared to 180 packages using previously available methods. That would translate to an increase of over 120%, according to Starship Technologies.

“A typical van delivery today involves driving to a delivery area, and then spending an entire day on door-to-door deliveries. By leaving the door-to- door part to delivery robots the van drivers’ productivity will significantly rise while reducing congestion on the streets and CO2 emissions,” said Allan Martinson, Starship’s chief operating officer, said in a statement.

Amazon (AMZN) and Google (GOOG) have been experimenting with drone delivery for some time. But other more unlikely companies are jumping into the space.

Qualcomm (QCOM) and AT&T (T) announced plans earlier this week about how well drones can fly on AT&T’s 4G cellular network. Drones linked to a network would have an easier time transmitting data, such as aerial photography, back to a company’s cloud computing service. The companies are conducting the trials to learn how drones can more efficiently fly beyond the line of sight of human drone operators—which is currently not allowed under FAA rules.