What the Founder of TOMS Shoes Is Doing Now 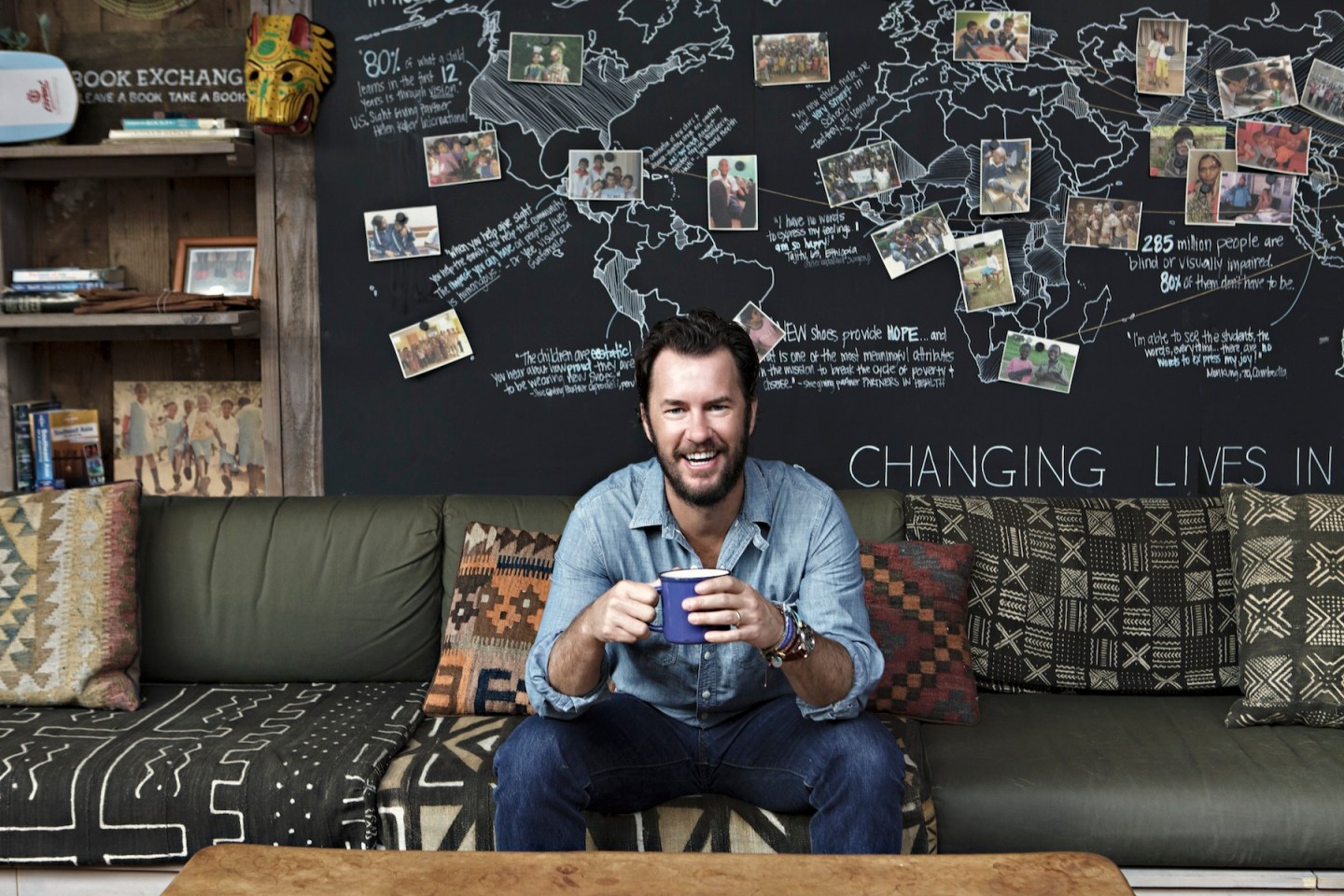 A decade ago, Blake Mycoskie turned two important observations from his travels in Argentina into what would become a multimillion-dollar shoe business.

The first was that impoverished children without shoes were not only exposed to illnesses, but unable to attend school in that country, as shoes are a requirement for attendance. The second was that nearly everyone with shoes, from farmers to cafe goers, was wearing a traditional canvas slip-on called the alpargata.

Believing there’d be a market for the shoe in the U.S., Mycoskie, a 2011 alumnus of Fortune’s 40 Under 40 list, soon put two and two together and launched TOMS, short for “Tomorrow’s Shoes.” His plan was to donate a pair of shoes to a needy child for every one he sold, considered by many a groundbreaking model for social entrepreneurship at the time.

He started out with just one business partner named Alejo Nitti, who helped him produce his initial run of shoes, using small shoe makers in Argentina. By the end of his first summer, using his Venice Beach apartment as his headquarters, Mycoskie had sold 10,000 pairs online and through stores in Los Angeles, including American Rag.

Fast forward to today, and TOMS, which has annual sales of around $500 million and more than 500 employees, has donated 70 million pairs of shoes to needy children. In recent years, the company has also branched out, using its “one for one” template to sell other products, including eyewear, coffee, and bags.

Yet the past two years have also been a time of significant change for TOMS. In 2014, private equity firm Bain Capital purchased a 50% stake in the company, reportedly valuing it at $625 million. With half of his payout of $200 million, Mycoskie launched a social entrepreneurship fund to support the next generation of companies like TOMS. So far, it’s made 15 investments in companies with social goals.

And in 2015, Mycoskie stepped down as CEO of his own company, handing the reins to Jim Alling, who previously held executive roles at both T-Mobile and Starbucks.

Following is an edited transcript of Fortune’s conversation with Mycoskie about what he’s working on now.

How has TOMS changed in the past 10 years?

I didn’t even think of TOMS as a business when I launched it in 2006. I was thinking of it as just a fun project. In just 10 years, we have awareness that’s at the same level of brands around the world like Nike and Converse. The elasticity of the brand shows that what people love the most is our “one for one” idea—they buy something and that can help someone at the same time. We have launched eyewear, and helped 500,000 people get their eyesight back. We have launched a coffee company that has allowed tens of thousands of people get clean water. And we launched a bag company last year that offers safe birth kits for women who give birth at home, through the sale of canvas tote bags and backpacks. We have the opportunity to build something far bigger than just the shoe business, but the shoe business can be three to five times bigger than it is today. We are at the tip of the iceberg for opportunity.

What made the TOMS shoe such an icon?

It was the simplicity of the shoe, and the simplicity of our message. “One for one” — it does not get simpler than that as a marketing and social mission message. And the shoe was simple and basic, a couple pieces of canvas draped over a sole, it had no laces and no technical factors, it was very low to the ground and it was a very utilitarian shoe. That simplicity sometimes is what creates beauty in design and that’s what allowed it to become an icon so quickly. It was also distinguishable from across the street, and no shoe looked quite like it. So people asked about the shoe, and the people who bought it were so proud they had helped someone in need, they told the story. And that story was motivating for people to go online and buy a pair.

How has the idea of social entrepreneurship changed since you launched TOMS? your “One for One” campaign?

When we started, no one was doing “one for one,” and a lot people thought we were crazy. Many of my business colleagues thought we would not make money and we would never be sustainable. Now there are over 100 one-for-one companies. It has created a new way of doing business and a new model. In terms of social entrepreneurship in general, more and more people are choosing this path and starting their business because it allows them to work hard on something they are passionate about, and it has created more fulfillment in the workplace. People don’t want to just work for a paycheck, especially the millennial generation. They feel their time and life is more meaningful than that.

Any thoughts about how businesses can make the social mission of the company synonymous with the brand?

Be authentic, do what you do for the reason you really do it, and don’t try to make it about something else. In this day and age people love and go to bat for a brand that is connected to its original mission and purpose. If you vary from that, it is hard to keep your community alive. [For TOMS] what drives the product development is not the product, but the giving.

I never wanted to step up to being CEO in the first place. I was forced to because someone had to do it, but it was never my skill set. So the day I hired Jim (Alling) was one of the best days in TOMS’ history. I knew we had a day to day leader who could learn the business and run it, and allow me focus on the all the stuff I’m good at. For many entrepreneurs it is a big decision, and they regret it, and they want to come back to it. It was always my vision to find a great CEO. Now instead of running the business day to day, I am focusing more on the marketing and the giving, which are the areas I have the most expertise and passion for.

What did you learn as CEO?

I learned being a great CEO and being a great founder are two different things and I was better suited to being a founder. Being a CEO requires much more present management of people, whereas I prefer to give people space, and to have lots of space.

Can you tell us about the social entrepreneurship fund you launched recently?

It has allowed me to invest in the next generation of social entrepreneurs. We’ve made 15 investments so far, and it is really fun to help support people on their journey where I was eight or nine years ago. Bain is a partner, but they have given me sole discretion in which companies to invest in. Our average investment is maybe $100,000. Artlifting, for example, is doing really great things recognizing that there are homeless people with artistic talent, and they create first art representation and gallery licensing for homeless people who are artists. We were also an early investor in Andela, which is creating tech jobs in rural Africa. That has a much bigger scale and it is now attracting big investment from people such as Mark and Priscilla Zuckerberg.