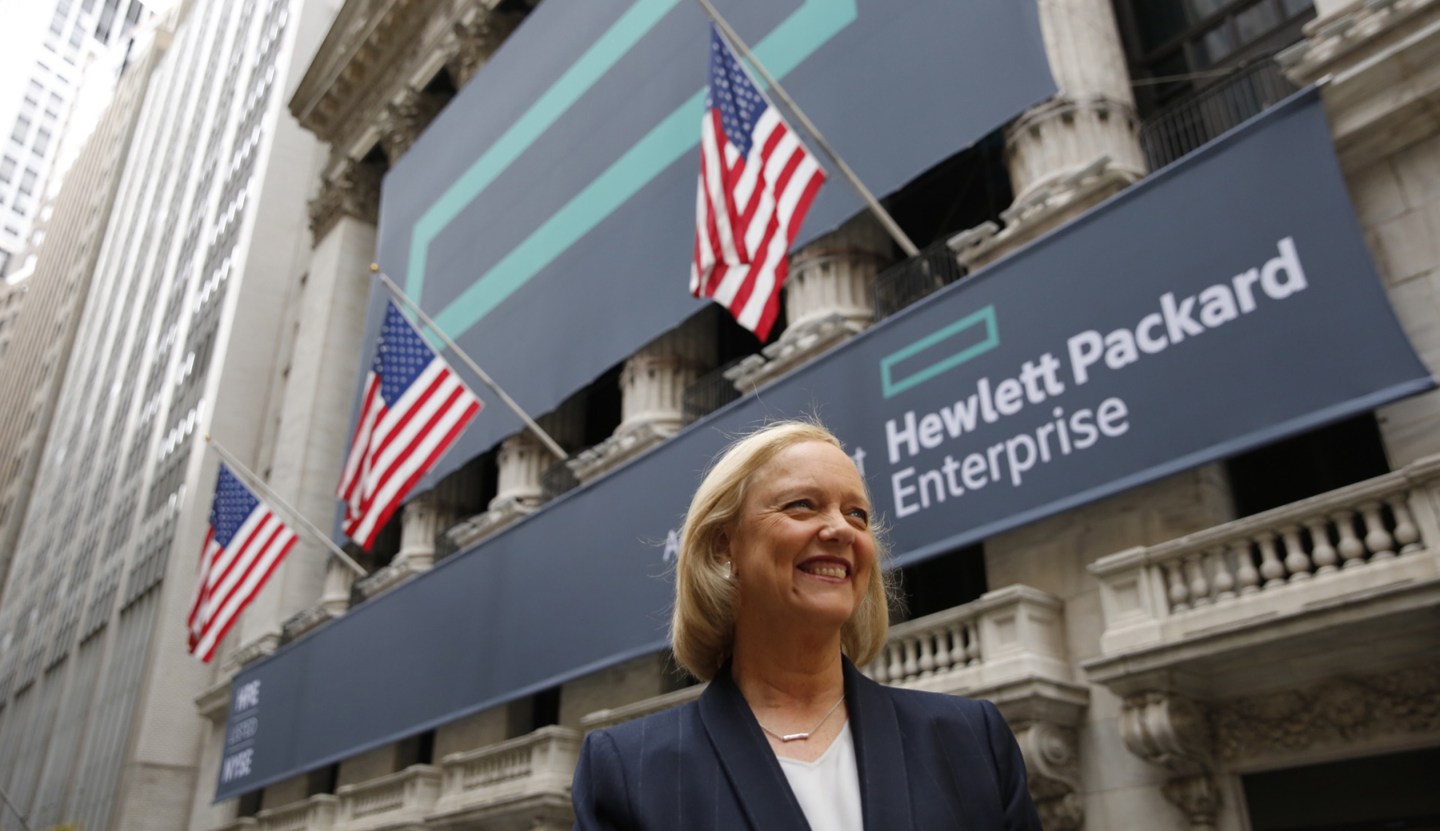 With Wednesday’s news that Hewlett Packard Enterprise would offload (actually “spin-merge”) its software business to Micro Focus, it’s clear that CEO Meg Whitman wants to undo most of HP’s acquisitions of the last decade.

The HPE (HPE) chief’s strategy is to slim the company to fighting weight even as rivals EMC and Dell are bulking up through their just-completed $63 billion merger to form Dell Technologies.

Whitman is not one to shrink from the dramatic. Last year, she cut the iconic-but-struggling tech pioneer Hewlett Packard Inc. into two parts, HPE and HP Inc., both $50 billion Fortune 500 businesses.

With her latest move, HPE will be much smaller, as Fortune’s Jonathan Vanian pointed out. After the deal to sell a big chunk of its business to U.K. software maker Micro Focus, HPE’s estimated annual sales will drop to $28 billion. Micro Focus, based in Newbury, U.K., is probably best known for its business around COBOL, a venerable programming language, but it also runs the SUSE Linux business.

The agreement means that HPE’s Vertica, Mercury Interactive, and OpenView software will be part of Micro Focus. It also represents a homecoming for Autonomy, the English software company that HP bought five years ago for more than $11 billion and that is also being sold to Micro Focus. That initial acquisition of Autonomy, orchestrated by Whitman’s predecessor, was widely slammed for being overpriced. Sure enough, a year after that deal closed, Whitman wrote off nearly $9 billion of that price.

On the HPE earnings call Wednesday, Whitman spent a lot of time discussing the software transaction. Micro Focus will pay HPE $2.5 billion while $6.3 billion of the combined company’s stock will go to HPE shareholders. The newly expanded Micro Focus will have about $4.5 billion in annual revenue.

The promised advantage of a “spin merge,” in which one company sells assets to another but then owns part of that company going forward, is that it is tax-free to both companies and their shareholders.

Earlier this year, HPE announced another “spin merge” of its enterprise services business to CSC (CSC).

That represented an unwinding of HP’s controversial $13 billion acquisition of Electronic Data Systems and its services business in 2008. To round out the picture, HP bought Mercury Interactive for $4.5 billion in 2006 and Vertica for $350 million five years later.

So, if software is taking over the world, as we keep hearing, why is HPE doing this? The easy answer is it has no choice. As more corporate data crunching and storage goes to public cloud purveyors like Amazon and Microsoft, many companies are buying fewer servers and storage gear.

And those big cloud providers, as well as massive IT users like Facebook (FB), tend to buy no-name hardware, not the pricey branded gear from companies like HPE.

For more on Meg Whitman, watch

HPE is hoping that the new structure will still give it the benefits of its software portfolio but without as much overhead.

And the company is not giving up entirely. Whitman stressed that both software and services are still “key enablers” going forward. She cited HPE’s OneView software for managing its high end hardware and Helion OpenStack cloud software as still critical to her company’s success.

Note: This story was updated to reflect that OpenView will move over to Micro Focus.